MashTips
Home Mobile Android Which Tab Do You Like - Apple iPad Mini Vs Apple iPad...

Stina Rose
Last Updated: August 16, 2019
MashTips is supported by its audience. When you purchase through links on our site, we may earn an affiliate commission at no extra cost to you.
Facebook
Twitter
Pinterest
WhatsApp
Telegram

Apple unveiled their newest iteration of iPad named as iPad Air in a event on October 22, 2013. Before few hours of Apple event, Nokia unveiled their first tablet Lumia 2520. Let us see a specification comparison of the above devices along with the famous Google Nexus 7.

Apple also upgraded it’s iPad Mini version with the much anticipated Retina Display along with the 64bit A7 processor. 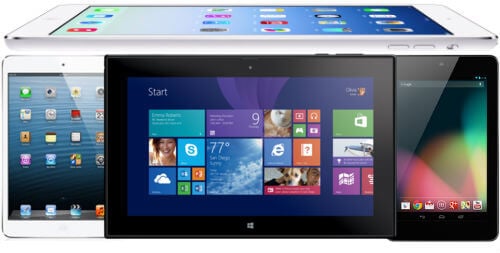 iPad Air and retina differentiate in screen resolution and  al other specs are same except the price and that make around $200 higher for the retina model. Nokia and Nexus tabs price lower than iPad models and Nokia works on Windows OS and Google Nexus on Android.

Apple started the 64bit computing in the mobile segment with the introduction of iPhone 5S. They are now expanded their 64bit devices line to Apple iPad Air and iPad Mini with Retina Display. In the coming months we can expect more 64bit devices from the rivals like Samsung, Google and Microsoft.

How to Change Language on iPhone Keyboard

The standard QWERTY keyboard on your iPhone is helpful at all times. However, whenever you want to type foreign languages on iPhone, the default...
Read more
Android

It wouldn't be wrong to term today's generation as the texting generation. Even the older generations are texting more and more. However,...
Read more
Android

Flashcards are an incredible way of memorizing huge dumps of data whether you are preparing for an upcoming exam or learning a new language,...
Read more How to Convert PDF to Google Docs and Back Again