The Best GameCube Emulator for Android In 2020

Before the PlayStation and Xbox duopoly in the video game console market, Nintendo was the king. From Gameboys to NES, SNES, Nintendo DS, and then the GameCube, every new Nintendo console made its way into so many homes. If you miss playing your childhood games on the Nintendo GameCube, we have found the best GameCube emulators for Android that might help.

While there aren’t any other options apart from the Dolphin GameCube Emulator for Android, the emulator itself gives you plenty of options.

On the PC, there are several options if you want to emulate any older Nintendo consoles, including the GameCube. When it comes to Android, however, there aren’t a lot of options to choose from. One of the very best GameCube emulators available for PCs, Dolphin, happens to be the only GameCube Emulator available for Android on the Play Store.

The emulator carries the original codename of the console that was later branded as the Nintendo GameCube. The Android version of the Dolphin Emulator is compatible with most GameCube games as long as you can find a compatible ROM file. While it does run most GameCube games, most does not mean all.

Dolphin also lets you run Nintendo Wii games, however, so there’s no lack of games that you can play on your Android device using this emulator. It requires Android 5.0 Lollipop and above as well as devices running 64-bit processors. If you’ve bought a smartphone within the last years you probably don’t need to worry about either of those.

How to Install Dolphin Emulator on Android?

How to Load A Game ROM on Dolphin Emulator?

When you have a compatible ROM file, it is easy to load the game ROM into the Dolphin Emulator on Android. Here is how.

While the default settings are usually enough to run most games smoothly, you might want to configure a few settings if you feel you can get better performance out of this Android GameCube Emulator.

Configure Dolphin As The Best GameCube Emulator for Android

One of the most important factors in gaming is CPU power. For Dolphin Emulator, you can adjust the emulated clock speed for better performance.

If you’re unsure of what something does it is probably better to leave it untouched. Most of the settings here are already set to the best possible option. However, if you have a powerful smartphone, you will want to enable the Override Emulated CPU Clock Speed option. 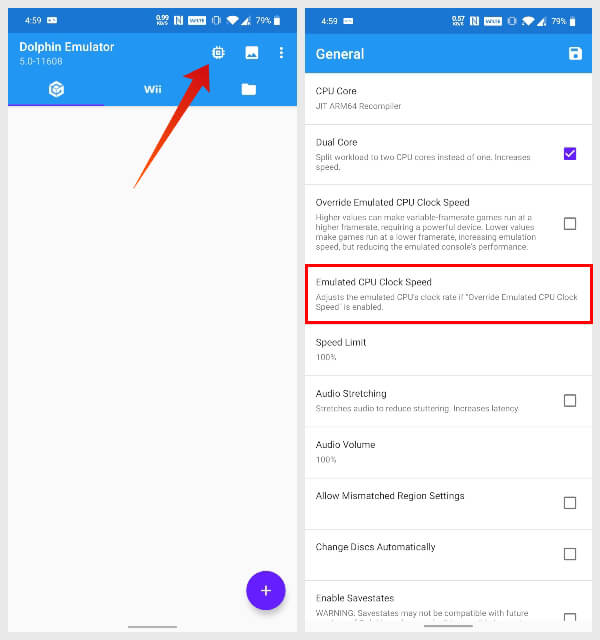 If your smartphone can handle it, you’ve just unlocked the best performance you can get on this GameCube Emulator on your Android.

When you’re done, remember to tap on the floppy disk or save icon in the top-right corner. If you simply press back, your changes will not be saved.

The picture icon, next to the CPU icon on the main screen contains visual settings. Once again, it’s best to leave it untouched if you don’t know what you’re doing. But if you’re having trouble running a game smoothly, you can change the graphics settings for Dolphic Gamecube Emulator on Android. 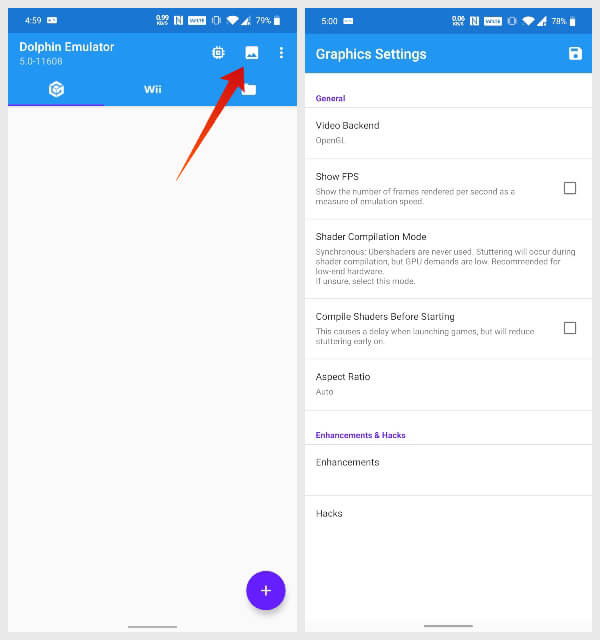 The Aspect Ratio is a personal preference so you can set it to whatever you prefer.

There are even more settings hidden in the Enhancements and Hacks options.

As before, remember to tap on the floppy disk icon in the top-right corner when you’re done.

GameCube is a video game console released by Nintendo in the year 2001. Like other Nintendo consoles, GameCube was an all-time classic, even if it was not the most successful game console from Nintendo. It was the first game console to use optical discs for storage.

The GameCube was neck and neck in terms of graphics performance compared to the Sony Playstation 2 and Microsoft Xbox. It could not only connect to your Gameboy via a link cable, but it also supported online games through modem adapter. Nintendo managed to sell 22 million units before discontinuing it in 2007.

What is an Emulator?

An emulator, in this case, is simply a piece of software that allows you to run other software that was designed for different hardware setup. It does this by allowing your system to act as if it were some other system. In this case, your Android smartphone can behave, as if it were a GameCube console thanks to the Dolphin Emulator.

Thus, games designed to run on the GameCube can run on your Android. The emulator handles all of that. All you have to do is find a compatible game ROM to load up in the emulator.

What is the Best GameCube Emulator for Android