How to Unlock Face ID Faster on iPhone X?

Apple’s newest flagship, the iPhone X had to sacrifice the hugely successful Touch ID fingerprint scanner housed in the iconic home button to implement an edge-to-edge bezel-less design. The Cupertino-based company had to settle for an all-new facial recognition biometric system after their ambitions of embedding a fingerprint scanner right beneath the display went in vain.

Nevertheless, during the launch of the iPhone X, Apple made a huge gamble by introducing Face ID. The company claimed that their new biometric system was equally and sometimes even more secure than the outgoing Touch ID fingerprint scanning solution. Well, everyone was eagerly waiting to try out the company’s latest flagship first-hand to see if the technology actually lives up to the bold claims that were made during the official reveal.

After using the iPhone X for over a month, I can confidently say that Face ID has exceeded all my expectations with flying colors. For starters, it’s equally convenient as Touch ID. You simply raise to wake the device and look at your phone to unlock it right away. Well, unlike almost every other smartphone with face unlock, Apple’s Face ID technology works even in total darkness, thanks to the infrared camera and dot projector housed in the controversial “notch”.

Moreover, it’s so secure that you simply cannot fool Face ID with just a photo or even a 3D face mask, and that’s exactly why Apple decided to use it for authorizing purchases made on iTunes and even Apple Pay. Well, there has been one department where I found Face ID severely lacking and that’s the speed in comparison to Touch ID. Believe me, it’s at least a second slower than the outgoing Touch ID. This is primarily due to the fact that you have to swipe up from the bottom of the display to get to the home screen even after unlocking your device, which most of you might find annoying.

Well, if you find Face ID’s unlocking procedure to be annoyingly slow, fret not, we’re here to help you. That’s right, we’ll let you know exactly how you can unlock your new iPhone X noticeably quicker.

Also read: How to Secure Google Drive with Face ID or Touch ID on iPhone and iPad

The unlocking procedure can be slightly fastened up by tweaking the Face ID settings on your new iPhone X. It’s called “Require Attention” and what this essentially means is that your device won’t unlock as long as you’re not looking at your device. In order to disable this, head over to Settings on your iPhone X, scroll down a bit and tap on “Face ID & Passcode”. In this section, you’ll notice the option “Require Attention for Face ID”. Simply toggle it off and you’re good to go. 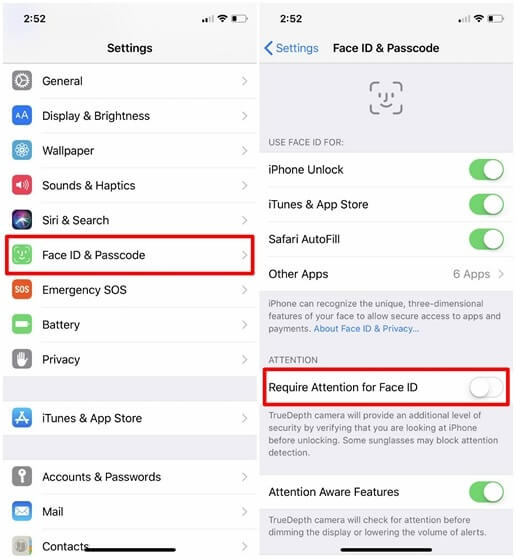 Although disabling this feature slightly bumps up your unlocking speed, it makes Face ID less secure than it’s supposed to be, since the device no longer needs your attention to unlock. For example, anyone who grabs hold of your iPhone X will be able to unlock it easily by bringing the device in front of your face, even while you’re fast asleep. Well, speed comes at the cost of security, but it’s totally up to you to decide.

Yes, you’re most likely unlocking your device in a wrong way, and believe me, I was doing it wrong as well in the very beginning. Usually, people wait for the “Unlocked icon” before they actually swipe up from the bottom of the display to get to the home screen. Well, you don’t have to wait for it like Apple portrays it in their advertisements. That’s right, you can swipe up even while the device is locked and Face ID will still be doing the heavy-lifting in the background trying to unlock your device. This is undoubtedly the fastest way to unlock your iPhone X with Face ID. This way, there won’t be any major delay while you’re trying to get to the home screen. Here’s a screenshot to see how Face ID works in the background after the initial swipe gesture. 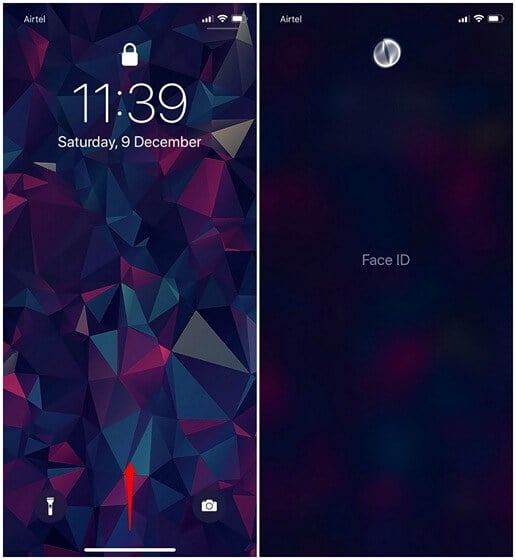 Well, this article could totally change the way you unlock your new iPhone X and even make you re-assess the initial impressions you had on Apple’s new Face ID technology. We’re very glad that we could help you out in unlocking your device noticeably faster with these two nifty methods. So, what do you guys think about the procedure? Are you still finding Face ID a bit annoying in terms of its speed, despite the added convenience? Do let us know your thoughts by sounding off in the comments section down below.

How to Use Emergency SOS Using Satellite on Your iPhone

Dynamic Island on iPhone 14 Pro- How It Works and Is It Worth the Hype?

How to Send Large Files on WhatsApp Without File Size Limitations

How to hide your secret files in an image?