Steve Kelly
Last Updated: August 16, 2019
MashTips is supported by its audience. When you purchase through links on our site, we may earn an affiliate commission at no extra cost to you.
Facebook
Twitter
Pinterest
WhatsApp
Telegram

Android video player apps are offering the best features comparing to other Mobile OS platform. Most of these video player apps for Android are plug and play and doesn’t need an additional codec. These Android Movie player apps support most of the video formats out of the box.

Very few of these Android video player apps end up with unsupported video formats while playing some special video formats. However, there are additional free video codecs that you can download to Android Video player apps to support that videos format. There are few good Android apps in Google Play Store that let you download and listen to MP3 Songs Offline without consuming your data plan.

When you browse the Internet, you can shrink your data usage by selecting the proper browser; there are lightweight browsers to save memory and data you can try with your Android device. Most of these Android Movie Player apps are capable of auto detect the subtitle format and play with the video. No matter whether the subtitle is a separate file or integrated with movie format, these movies apps are powerful to read and display it.

Based on these all nice features, we listed the best Android Video Player Apps for All Video Formats.

MX Player is the best Android movie player app to enjoy movies on an Android device. This video player gives the option for hardware acceleration that can be applied to more videos with the help of new H/W decoder. MX Player supports multi-core decoding, which provides better performance with dual core CPU devices and subtitle.

The features include zoom in/out option while playing a movie; Kids lock that keep your kids entertained without having to worry that they can make calls or touch other apps and supports most of the formats.

VLC media player is a free and open source cross-platform multimedia player that plays most multimedia files as well as discs, devices, and network streaming protocols. This is the port of VLC media player to the Android™ platform. VLC is one of the number one Android Video Player Apps in Google Play Store. 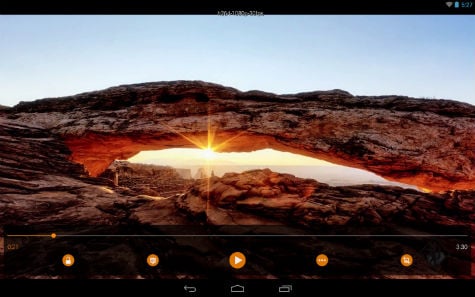 This VLC App for Android can play most video and audio files, as well as network streams and DVD ISOs, like the desktop version of VLC. VLC is intended for everyone, is totally free, has no ads, no in-app purchases, no spying and is developed by passionate volunteers. VLC for Android is also a full audio player, with a complete database, an equalizer, and filters.

MoboPlayer let you watch any video formats on an Android device without any further. Just move videos to your Android device and play it. No need to convert videos to any other format to watch your movie.

Related: Best 7 Free Apps to Lock your WhatsApp and Facebook in Android

Some these Android Video Player Apps can read from your DropBox, is a useful feature if you are running out of memory on your Android phone. If you have a WiFi connection, it can play all your movies from your DropBox or any other cloud service, and that make easy by adding movies in DropBox and playing on your device.

Google Play Store for Android has millions of apps and the same goes for App Store for iOS. There are tonnes of apps under...
Read more
Android

How to Fix Telegram Not Connecting or Working on Android

I recently wrote a guide on the Telegram web app and how to fix connection and loading issues with the same. Here is another...
Read more
Android

How to Change Google Assistant Voice on Android