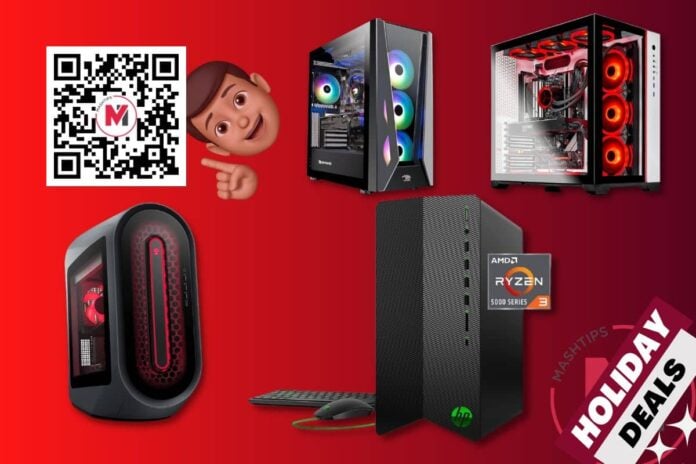 Are you planning to invest in a new Gaming System? Amazon is offering good deals for Gaming desktops this holiday season. We have listed the best deals for the Gaming Desktop this black Friday week. The discount sale offers these multipurpose machines great discounts.

Here are the black Friday deals on the best gaming desktops, including Acer, Alienware, MSI, and Dell Systems.

The 11th Gen. Intel Core i5-11400F 6-Core Processor, 8GB of DDR4 2666MHz Memory, and a 512GB NVMe M.2 SSD are all included in the Acer Nitro Gaming Desktop. It has 4GB of GDDR5 video memory and NVIDIA GeForce GTX 1650 graphics, making it suitable for moderately demanding games. Although Windows 10 is installed by default on the Acer Nitro Gaming Desktop, Windows 11 is available as an upgrade.

There is an integrated 1.0-megapixel high-definition webcam, two stereo microphones, four USB 3.2 (Type A) gen 2 ports, one HDMI-out port, and a variety of other interfaces. The bundle features a keyboard, mouse, and all necessary software. Windows 10 installed, with support for Windows 11 upgrades.

The Acer Predator Orion Desktop features an 11th-Generation Intel Core i7-11700F processor, 16GB of DDR4 RAM, a 512GB NVMe M.2 SSD, and a 1TB 7200RPM hard drive. The graphics processing is handled by the NVIDIA GeForce RTX 3070, which has 8GB of GDDR6 video memory and can easily run demanding games.

The 32GB RAM can be overclocked for even more performance enhancements. To lower CPU temperatures and keep things quiet, a new chassis based on the Legend Industrial Design allows for liquid cooling and effective airflow. There are USB Type-C connections for speedy data transfer.

The Dell Inspiron 7700 AIO desktop is equipped with the latest 11th-generation Intel Core i7 processor. The 27-inch full-high-definition LCD screen is bright and clear from every angle. Powered by Intel Iris Xe graphics, it has 12GB RAM, 256GB SSD, and 1TB HDD.

It’s great for casual games. The high-definition webcam is a useful addition to online conferences and events. Windows 11 is already pre-installed on it. There’s also a mouse and keyboard available for use. Included ports are 1 USB-C, 3 USB 3.1 Type-A, and 1 USB 2.0. There is not only WiFi 6 but also Ethernet for those who prefer it.

The HP Pavilion Gaming PC is equipped with an AMD Ryzen 3 5300G and 8GB of RAM. Thanks to the 4 GB of dedicated GDDR5 RAM on the AMD Radeon RX 5500 graphics card, almost any game will run smoothly. The 512 GB PCIe NVMe M.2 Solid State Drive helps speed up data access. You’ll find four USB 2.0 Type-A connectors on the back in addition to one USB Type-C port.

It includes a mouse and keyboard together with the preinstalled version of Windows 11. WiFi 5 and Bluetooth guarantee reliable data transfer.

The iBuypower Gaming PC has 32GB of RAM and an Intel Core i9 – 12900KF processor for lightning-fast frame rates. You get a 1TB SSD in addition to the 2TB HDD for even more space. Assuring a lag-free gaming experience is the Nvidia GeForce RTX 3090 24 GB Dedicated Gaming Video Card.

There are a total of 4 USB 3.0 ports and 2 USB 2.0 ports available. It has Windows 11 installed, and a mouse and keyboard are included. The fans, which are also equipped with RGB lighting, provide effective liquid cooling.

The MSI Pro AIO’s 11th-generation Intel Core i3 processor ensures a seamless, fast, and powerful experience. The PRO AP241 11M has a 23.8-inch IPS Panel with the correct color and contrast ratio, which optimizes the screen’s color and brightness so you can see every detail.

The 8GB of RAM and 500GB SSD help it run quickly and efficiently. Windows 11 is already installed, and there is faster WiFi 6 for better connectivity. With integrated graphics, you can play casual games without a hitch. There are two USB 2.0 Type-A ports and four USB 3.2 Type-A ports.

The 12th generation Intel Core i7 overclockable processors offer the highest levels of performance for games, multitasking, and other demanding applications. Using Windows 11 Home, you’ll have access to the latest version of Windows, which offers improved interoperability with other programs.

The Skytech Prism Desktop has a powerful AMD Ryzen 7 5800X processor, 16GB of RAM, and a 1TB PCIe Gen4 NVME solid-state drive. The graphics are managed by a GeForce RTX 3080Ti 12GB GDDR6X Graphics Card. The included operating system is Windows 10, which may be upgraded to Windows 11.

A mouse and keyboard are provided at no additional cost. Extra cooling and eye-catching lighting are provided by the six RGB fans. Two USB ports are USB 3.0, and one is a USB-C type.

These are the best gaming desktop and All-in-One Desktop deals. Visit Mashtips for more discounts on different electronics and gadgets and save money on deals and discounts.

Best 12 Thunderbird Add-Ons to Meet All Your Needs