15 Best Gifts for YouTubers and Vloggers 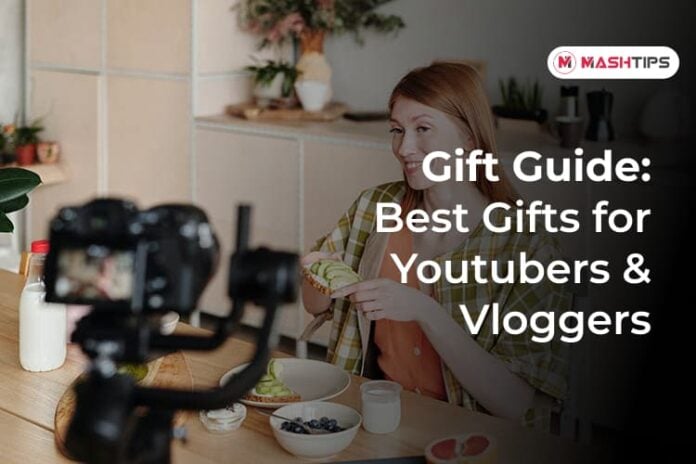 YouTube has made video editors and content creators in every city and town. More videos are uploaded on the website, and even more if you count the entire internet, every day. That is to say YouTube is a popular career choice and so is vlogging. There’s a good chance many of you know a budding young professional like that. If you do, here we have listed pretty much all the best gifts for YouTubers and/or gifts for vloggers that you can find from cheap to expensive things.

The most important thing for you need for Vlogging is the camera. The better the camera the better your vlog will look. The Sony ZV-1 Digital Camera, therefore, is one of the nicest gifts for a vlogger or YouTuber friend. Sony ZV1 is a well-packed point-shoot camera specially made for vloggers, with DSLR-level features on board.

For the price you pay, you get an entire vlogger kit as well as the camera. This includes the entire Corel Software Suite: PhotoMirage, VideoStudio 2019, Painter Essentials 7, PaintShop Pro 2019, & AfterShot Pro 3. Furthermore, you also get the Sony ACCVC1 vlogger kit alongside the Case Logic CPL-103 camera case.

Canon M50 comes with a 24.1-megapixel sensor and 4K video recording capablity. There’s a built-in vari-angle touchscreen LCD to control the camera and view your shots.

If you already have a camera, the next thing you’ll want is a tripod. So the Joby Gorillapod 3K Tripod kit is a good gift for the YouTuber in your life. It can support any device as long as they weigh under 6.6 pounds. Joby Gorillapod has wrappable legs, so it can hold onto virtually any surface.

The panning bed can go around 360 degrees and tilt up to 90 degrees. It’s also modular which means you can buy accessories and swap out parts such as grip tight pro mount, Gorillapod arms, etc.

UBeesize 50-inch phone tripod stand with extended arm is one of the best gifts for a vlogger or YouTuber. It has an adjustable 360° ball head and can hold two devices at once. Vertically it can be rotated 90° as well.

The tripod is compatible with multiple devices, including cellphones, cameras, GoPro, webcam, ring light, and more. The 2-in-1 tripod weighs around 1 pound and can be folded from 50-inches down to just 16.3-inches. That makes it a very compact and portable tripod.

Cameras and tripods are fine, but they’re basic things every YouTuber probably already has. Ring lights might just be the perfect gifts for some vloggers or YouTubers really. UBeesize 10-inch Selfie Ring Light comes with a 50-inch tripod stand as well as a flexible phone holder.

Not only does it have its own legs to stand on, it can even provide some legs to your phone. The ring light features 3 light colors (warm, cool white, daylight) and 11 levels of brightness. So in total it gives you a range of 33 options. The tripod can collapse all the way down to 15-inches.

One can use a smartphone today for video instead of a professional camera. However, there is no good alternative to a professional microphone. BOYA on-camera shotgun video microphone, therefore, is one of the better gifts for vloggers or YouTubers.

Boya unidirectional mic with a 3.5mm headphone jack connector, something that has been disappearing from modern smartphones. The microphone does not require a battery since it connects directly using the headphone jack.

Related: 8 Best Wireless Karaoke Microphones to Perform Like A Pro

Vloggers often don’t sit in one place but are rather moving around. The RODE SmartLav+ lavalier microphones are obvious gifts for YouTubers or vloggers who prefer portability. The company advertises it as a “Broadcast quality, professional-grade Lavalier Mic with TRRS Jack.”

RODE SmartLav+ is an omnidirectional, discrete miniature microphone. The RODE SmartLav mic uses the 3.5mm headphone jack to connect to your camera or smartphone.

Zoom H1n is a handy recorder for audio recording. It has a streamlined body with a matte finish and a protective mic enclosure. The microphones themselves are stereo condenser type in 90° x/Y format.

You can control the Zoom H1n recorder with the simple buttons on the body, each button performs a single specific function. The Zoom H1n lasts about 10 hours upon continuous usage on a single charge. There’s a small digital display to show information and navigate through menus as well.

Smartphone gimbals are important to shoot stabilized videos for quality vlogs. Zhiyun Smooth Q2 is a 3 axis gimbal stabilizer with a metallic build. The metal used is an aerospace-grade aluminum alloy.

The phone holding clamp is detachable, so you don’t have to balance the phone every time you take it on or off the gimbal during recording. The gimbal also allows native control of the iOS and Android camera apps using the buttons on the gimbal. This makes it easier to use since you don’t have to reach for the screen every time.

DJI Osmo Pocket 2 is also a handheld 3-axis gimbal, but it already has a built-in camera. That means the gimbal is only useful as long as the camera remains competitive. You can’t attach your phone but the camera on top helps you shoot high quality videos no matter what.

DJI Osmo Pocket 2 is a 64 MP camera capable of shooting 4K videos for up to 140 minutes on a single charge. It’s small enough to fit the palm of most people’s hands and weighs only 116g. Furthermore, it also has a tiny screen, so you can see the shot.

Memory cards are again, something very important for a vlogger because most cameras don’t have a large built-in storage. They’re seemingly tiny things, yet they make perfect sense as gifts for YouTubers / vloggers. The Samsung 128 GB EVO Plus micro SD card is large enough to store multiple, long 4K videos.

You also get an SDHC adapter as well. The memory card is waterproof, temperature proof, x-ray proof, and magnet proof. Reading speeds can go as high as 100 MB/s while write speeds are slightly less at 90 MB/s.

A vlogger typically is often on the go and that means he or she will need a backpack to hold all their vlogging gear. The AmazonBasics camera backpack is designed just for that, and it doesn’t cost as much as other similar products.

The camera backpack can stretch up to 11.75 inches in height, 8.75 inches in width and 14.5 inches in depth. It has several compartments for cameras and accessories, but not laptops. Meanwhile, there are bigger versions for the backpack that can accomodate your laptop as well.

A vlogger more often than not also edits those videos and videos tend to also have audio. The point is, you need some really nice pair of headphones when you’re dealing with audio. Edifier H840 are a pair of wired noise-cancelling headphones designed for audiophiles.

YouTubers and many vloggers as well need a professional grade video editing software, and there’s no getting around that. Adobe Premiere Pro licenses are pretty much the best gifts for vloggers or YouTubers who already have all their hardware needs covered.

Adobe Premiere Pro is arguably second only to Apple’s mac exclusive Final Cut Pro X. So that makes it the best choice for anyone who does not use a Mac for editing purposes. This is a 12-month subscription that continues after 12 months unless canceled.

Storage devices are always good gifts for vloggers, even greater gifts for YouTubers. When you’re dealing with high definition and especially 4K videos, you need a lot of storage and fast storage. The SanDisk 1TB Extreme external SSD fulfills both those requirements.

The portable SSD uses a USB 3.1 connection and provides read/write speeds up to 550 MB/s. The body is ruggedized, water and dust resistant, rated at IP55. It’s shock-resistant as well up to 1500 kg. The SSD comes with a 3-year warranty and works with all devices that support external storage.

A vlogger or a YouTuber essentially just needs a good camera, a good microphone, a tripod or gimbal, good lighting, and professional video editing software. From the gift options above, we think we have included everything. If you have some more gift ideas for vloggers and YouTubers let us know in the comments below.

20 Last-Minute Gift Ideas for Women in this Holiday 2022

20 Last-Minute Gift Ideas for Boyfriend in this Holiday 2022

How to Turn Down Siri Volume in HomePod and HomePod mini