How to Fix Grub Bootloader after Deleting Ubuntu Partition?

You ever setup dual boot OS on the laptop with Ubuntu and Windows. This Dual Boot System seemed fine until you for some bizarre reason decided to delete Ubuntu Linux partition from Windows. Oh boy, now you are left with no way to go as you just can’t find a way to boot into your windows system. You find the grub rescue prompt when you restart the laptop and basically your Grub Bootloader is all messed up. Don’t worry, you’ve come to the right place.

We can solve this by fixing the Grub Bootloader Configurations. This solution has been tested numerous times to make sure that it would work on most devices. There are usually two situations that you man end up with the Bootloader error.  Let’s see one by one and you can jump to the right solution listed below.

There might be cases where even when you still have both OS on your laptop. In this case, both Ubuntu and Windows 10 partitions are intact. Still, you may face the problem, since the Grub menu doesn’t show the Windows boot option. In such cases, there is quite a simple fix to bring back Windows Boot Option into the OS Selection menu:

You can see in the terminal window, generating the grub configuration file again. After few seconds, once it found Windows (10) bootloader, you will get the prompt again.

Now close the terminal and restart the laptop. When the system boots up again, you will see the option to boot into Windows.

Dual booting is a great way to increase productivity as you can have the best of both worlds. Most users use this to their advantage as this can help you to get your work done even when one OS fails you. However, it is easy to get into trouble if you accidentally or intentionally delete the Ubuntu Linux partition. This will mess up the Windows Boot Manager that overwritten Ubuntu with the Grub Bootloader. Hence, when you delete Linux partition from hard disk and restart the laptop, you will end up in a grub rescue prompt. Let us see how to solve this bootloader corrupted issue;

When you encounter this issue, you will boot straight into grub rescue with an error showing no such partitions. 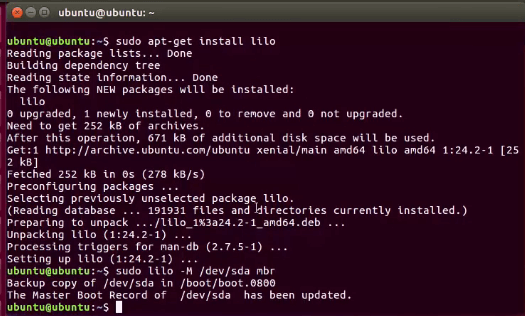 This command will create a backup of the current configurations in a boot backup folder, and there will be a successful completion message on the Ubuntu terminal “The Master Boot Record of /dev/sda updated”.

That’s it, now you are good to go and shut off your PC and remove the Ubuntu CD or USB from the system. Now power up (start) the laptop/desktop and the system will boot right into Windows as default.

Also Read: How to Edit GRUB with GRUB Customizer

How to fix Grub Bootloader after Deleting Ubuntu Linux partition

Most of us (including our team) using a Windows 10 / Ubuntu Linux dual boot setup in our PC might have run into this issue. We tested this GRUB Bootloader fix with various systems and configurations and had that it does well enough to be recommended for all different cases for issues.

We know how hard it can be to spend your valuable time regretting and trying workarounds to get your PC back in working condition. That is why we presented the simplest way to Boot into Windows After Installing/Deleting Ubuntu Linux.

Hope this method helped you. If there are any other Linux problems you would like us to help you with, do share in the comment section below.

5 iOS Apps for Mechanics for Car

How to Enable RCS Chat on Any Android Device