How to Get Apple Music Replay on iPhone?

Apple Music users in 2019 have seen a lot of facelifts and updates to the music streaming service, especially post-release of the iOS 13. Newly added stations on Apple Music helps users discover new music and the songs which match their tastes easily. If you have been looking to recap all your songs played in the past whole year, Apple has a solution for you – Apple Music Replay.

What is Apple Music Replay?

With the aim of taking over the Spotify in the Music Streaming arena, Apple Music has been introducing a set o unique features to the Apple Music users. This includes live lyrics, up next, revamped UI and many more.

The Apple Music Replay is one of those new features, which lets you recap all of the songs you have heard the most, during the year you stayed as an active subscriber. Finally, this sounds like a promising feature from Apple Music to attract more users, even from Spotify.

Replay on Apple Music is a dynamic playlist, which we can opt to create or not. Apple picks up your favorite songs automatically and adds to the playlist, every week. This is just similar to any other personalized playlist on the streaming platforms.

How to Get Replay on Apple Music Web?

If you are using your PC or Mac to stream songs from Apple Music, you must be using the beta web version of Music. Unlike Spotify, Apple Music does not have a standalone app for streaming on Windows PCs.

However, Mac users can have the app with the latest macOS Catalina 10.15, as a built-in feature. Although, you can only create the Apple Music Replay playlist using the Web version, and later can be found and played using the app. Here is how you can get Replay on Apple Music Web.

After created, you can scroll down and find your top played songs, top artists, albums and more – each categorized and well organized.

From the same window itself, you can see the number of times each song you have played throughout the entire year. You could only see the count of play only once from this window, and it will not show you further if you to the playlists and start playing tracks. After adding the playlist to your library, you can simply open the Apple Music app on your Mac or even the iTunes app on Windows, and find the Replay playlist. Only the playlist creation is limited to the web but can be streamed from any platform.

How to Personalize Apple Music for You

Get Apple Music Replay on Your iPhone

Well, currently Apple asks its users to create the Apple Music Replay playlist using their computers. Apple has not revealed when or if they are making the feature available for iOS or Android app. Anyways, there is still a link to the beta web version of Apple Music, where you can create the playlist. Here is how you can do it using your iPhone. 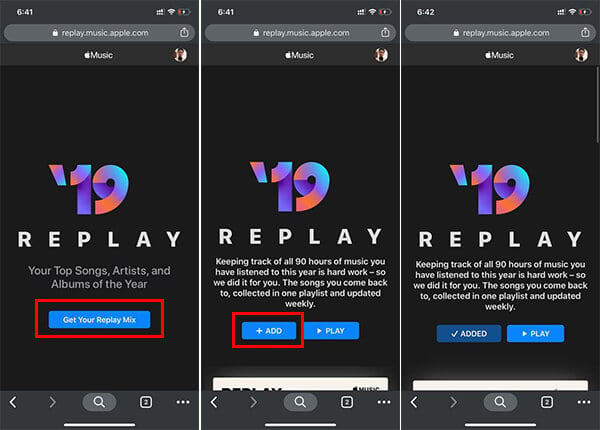 Related: How to Download Files & Documents to iPhone or iPad

Like every other personalized playlist on Apple Music, the Replay also gets updated every week. It will keep track of your streaming habit and chooses your most favorite, most listened ones to include in the playlists. However, you cannot modify the playlist on your own, since the songs are auto picked.

Once you create the playlist, you can also ask Siri to play it for you. You can simply command “Play my playlist Replay 2019” and you can instantly start listening to them.