How to Limit Time on iPhone for Social Media Apps

These days people are so much addicted to their smartphones and apps, that they could not live without them even for a day. Kids and Teens are spending at least a few hours every day with apps like Facebook, SnapChat, YouTube and more. Too much of exposure to the electronic devices will not only affect eyesight but also affects the bedtime and sleep duration. Healthcare professionals suggest that it is better to switch off all the electronic devices at least an hour before going to bed.

Not only adults, but most of the kids and teens are keeping their iPads and iPhones on their beds only. Then, how will they go to bed on time and get proper sleep? The iOS 12 ScreenTime feature helps the parents to control the usage of the apps and to follow the bedtime for kids. Of course, it can be used for adults as well.

Do you know? The top 3 addictive iOS apps among teens and kids are Facebook, YouTube, and SnapChat. Now, let’s see how to reduce addiction to these apps using iOS ScreenTime. 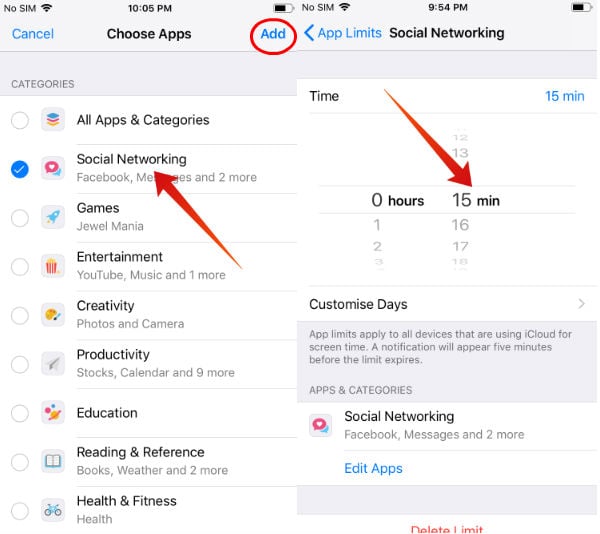 Once the time limit is reached, the Facebook app will hide automatically. Instead, a Time Limit warning screen will be displayed on the screen. For kids, the only way to get additional time is to wait until the next day or to contact their parents.

For smaller kids, the best option will be to set iOS Downtime during their bedtime so that it is not possible to open any app except calls and messaging. You can read more details on the article to Set Downtime on iOS.

Even a 2-year-old kid has learned how to play rhymes or other videos on YouTube. These days most of the toddlers know how to skip advertisements to watch their favorite videos without interruption. And, the parents don’t have any other option but to give their smartphones to the kids. Otherwise, the kids will become so cranky till they get the iPhones or iPads on their hands. However, it is not healthy for small kids to get too much exposure to electronic devices. As a parent, we should limit the usage of this kind of addictive apps. Let’s see how to do that. 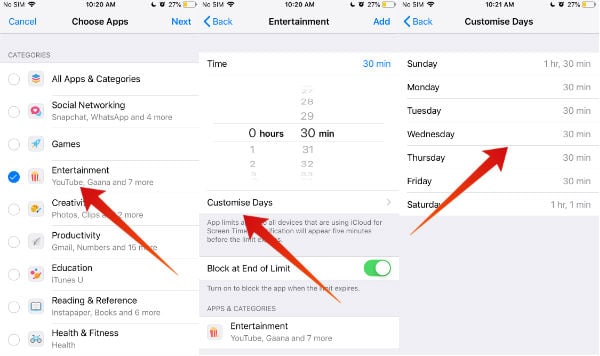 For smaller kids, it is better to install YouTube Kids than the regular YouTube app. In addition to setting time limits for the apps, you should also set restrictions on the content watched by your kids based on their age. For example, you can block the download of irrelevant apps on the App Store by configuring the Content & Privacy Restrictions on your iPhone. Check out this post on how to restrict content and apps on iPhone using iOS ScreenTime

How to Set App Time limit for Snapchat?

Teens love to share not only their memorable moments in life but also their everyday happenings with their social circle as images or messages. Like Facebook Messenger, Snapchat is also getting a lot of popularity among the teens and college students. Even though it is little hard to control the iOS usage of your teens when compared with smaller kids, still, you can try to set some kind of time limits.

How to Control ScreenTime?

In addition to setting time limits for the apps, you can monitor the ScreenTime. With iOS 12, you can easily monitor how much time your kids spend with different apps and control the app usage based on that report. For example, if your kid is playing non-stop games on the iPad or iPhone, then you can set a time limit for the games category. Plus, you can block their access to download and install new games from the App Store. Read this post to get the ScreenTime Report for your kids.

What kind of steps you have taken to reduce your kid’s addiction to social media, entertainment or gaming apps? Would love to see your comments.

How to Send Multiple Email Attachments from iPhone and iPad?