Here is a list of lightning port adapters and converters for iPhones, iPads & iPods. You can use these for all kinds of purposes, including mirroring your iPhone screens. 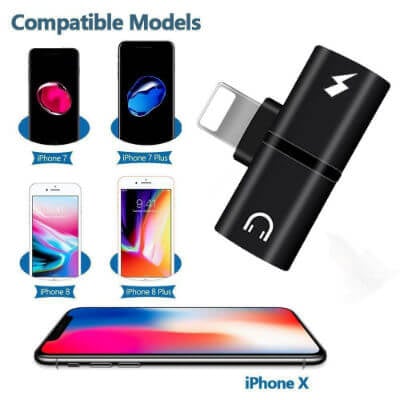 Apple is on a roll and is removing the 3.5mm headphone jack left and right from its devices. Those who have already bought an expensive set of headphones have no other choice but to use dongles.

A problem though is you can’t use your headphone and charge the device at the same time, should you ever need to. YUEMIDAMY Headphone and Charging Adapter Splitter solves this problem. It has a lightning connector at one end, and the other end splits into a lightning port and a 3.5mm headphone jack. Basically, this is a lightning port splitter extend the adapter with one more audio port.

The headphone jack port supports up to 48Khz, 24-bit audio. If you have no idea what those numbers mean, they’re good enough for almost everybody. There’s no additional app or software required, you can simply plug and play. It supports any newer iPhones without a headphone jack or iPads with a lightning port. 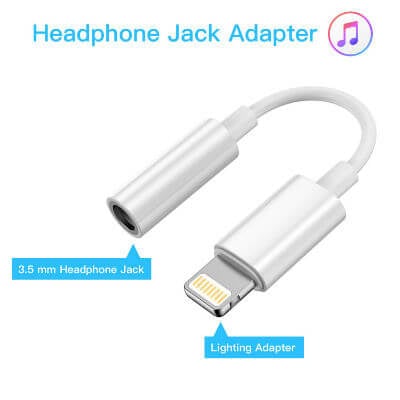 If you’re not so concerned about charging and using your headphones at the same time, a simple, lightning to 3.5mm headphone dongle should be enough for you. The Nicove 3.5mm Headphone Adapter is exactly that.

This Lightning port to audio converter supports all new iPhones such as the iPhone X/Xs/Xs Max/XR 7/8/8Plus and any of the latest iOS versions such as iOS 10/11/12 and 13. As any other similar adapter, this is a plug and play connector. Nicove claims the alumina shell makes this lightning audio port more wear-resistant and more resistant to interference.

Dongles are surprisingly easy to lose but you don’t have to worry because this one comes in a pack of 3. 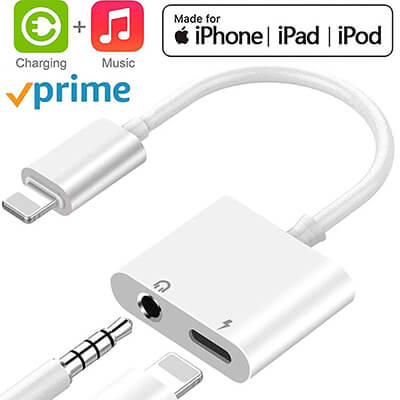 This is a different kind of headphone adapter than the one mentioned at the top of this list. It does allow you to charge your iOS device with a lightning cable while simultaneously connect your earphones via a 3.5mm headphone jack. That much is the same.

However, the adapter connects to your iOS device via a short cable at the end of which is the lightning connector. As the end result, there’s only a single wire connected to your device. This ensures you wouldn’t have much trouble playing games while both your charger and headphones are connected to your iPhone.

It supports 24-bit, 48KHz lossless output ensuring sound transmission stability and fidelity. As usual, no additional software is needed. In fact, it comes with its own decoding chip. Any newer devices such as the iPhone X/Xs/Xs Max/XR, iPhone 8/8 Plus, iPhone7/7 Plus, iPod, and iPads are supported. As for the software, support for iOS 10.3 and above is included. 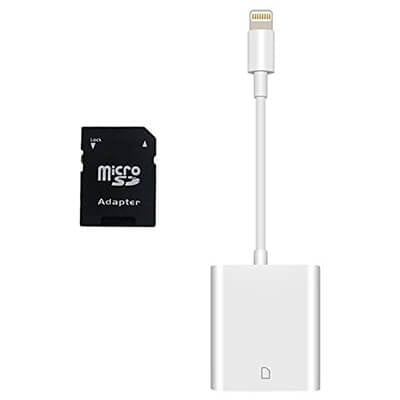 FA-STAR SD Card Reader is another Lightning to SD Card adapter. Unlike the previous one, this only features a single slot for the standard sized SD Card. However, there is another adapter included for microSD cards which can then be inserted into the SD card slot on the adapter.

It’s not quite as convenient but it is what it is. Besides, since the microSD Card adapter is independent of the original adapter, you can use it somewhere else too like another laptop. It too supports JPEGS, and RAW image formats as well as MPEG4 and H.264 video formats.

The FA-STAR Lightning SD Card Reader supports data transfer speeds of up 14MB/s to 16MB/s. This adapter is compatible with any iPhones running iOS 9.2 or above and iPads running iOS 8.0 and above. It also supports both Standard SD and SDHC cards. 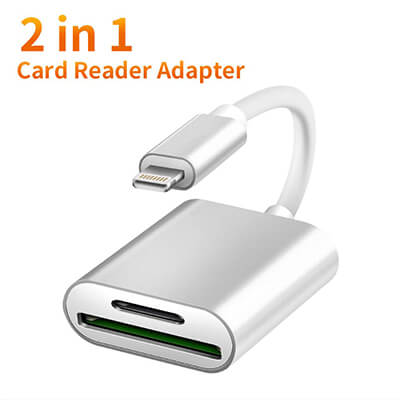 iOS doesn’t support mass storage devices such as USB drives. Therefore, the only way to transfer photos from your camera to an iOS device directly is with a microSD or SD card. iOS devices don’t really have slots for either, however. That’s when the Rocketek SD Card Reader can come in handy.

This iPhone Card Reader connects to the lightning port on your iPhone or iPad and houses two slots for a microSD (TF) card or a full-sized SD card. This lightning port card reader has support for both Standard SD cards and standard SD cards as well as SDHC. You can simply plug it into your iOS device and start to import photos or videos. There is no additional software or app required.

The iPhone SD Card adapter suppers JPEG and RAW files for images and H.264 and MPEG4 format for videos. Rocketek promises data transfer speeds of 14MB/s. The adapter is compatible with any iOS device running iOS 9.2 or above. This long list includes devices like the iPhone Xs/Xsmax iPhone X, iPhone 8/8Plus iPhone7/7 Plus, iPhone 6S/6S Plus, iPhone 6/6 Plus, iPhone SE, iPhone 5s/5c/5, iPad Mini 2/3/4, iPad Air/Air 2, iPad Pro, and iPad 2/3/4. 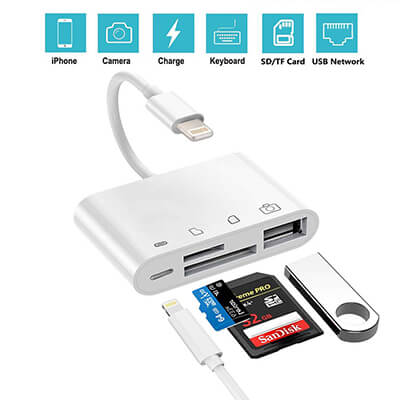 Apple has finally brought flash drive support at least for iPads. Unfortunately, that requires USB Type C which is a port not found on older iPads. If you have such an iPad, this 4-in-1 SD/TF Card Reader might be all you need. It features a lightning connector on one end while on the other there’s a lightning port, a microSD card slot, an SD card slot and a USB Type-A port for flash drives.

Thanks to the lightning port, you can connect a power source to the adapter which can provide enough power for the USB flash drive. The USB port also opens the possibility of all kinds of things such as printers, ethernet adapters, etc. That little trick won’t be necessary for the memory card slots. Keep in mind though that you can only use either of the two memory card slots or the USB port at once. These cannot be used simultaneously.

Both the microSD card slot and the SD card slot, along with the USB port supports USB 2.0 speeds. In other words, this gives you a data transfer speed of 14MB/s to 16MB/s. A maximum memory card capacity of 64GB is supported. Like other adapters, this is a plug and play device so you don’t need any additional software. Devices running iOS 9.2 and above are supported. 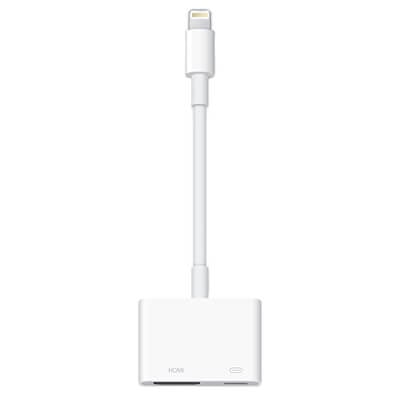 This works with any iPhones newer than iPhone 5, all iPad, and iPods 5th generation and later. The screens on these devices can be mirrored onto any TV, video projection screen, or any other devices with an HDMI compatible display. The adapter features a lightning connector on one end and an HDMI port along with a lightning port on the other. The video output is the same as that of your iOS device’s display. 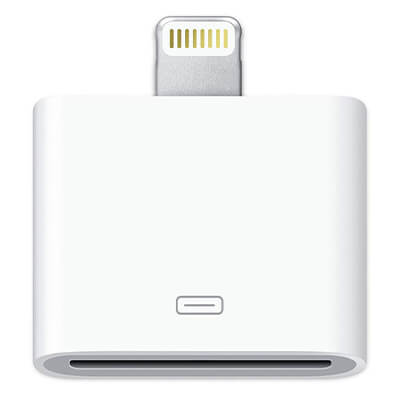 The 30-pin connector made its debut in 2003 with the iPod. It later found its way onto iPhones and iPads but was discontinued in 2012. If you have an older accessory such as the Apple iPod Hi-Fi, modern iOS devices can’t directly be connected since they feature lightning ports.

The Apple Lightning to 30-pin adapter will come in handy in such situations. Video output is not supported but there is support for analog audio output, USB audio, as well as syncing and charging. 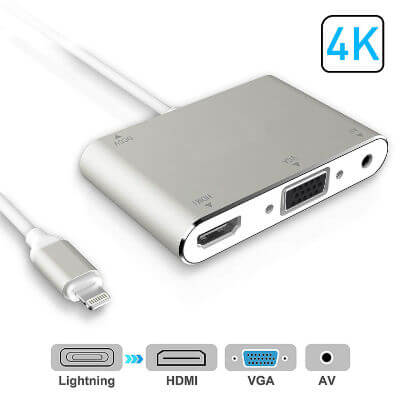 Even though HDMI is the standard these days, there are many people who still have older displays with VGA and AV connectors. With this 4-in-1 HDMI VGA AV adapter, you can connect your iOS device to a TV, HDTV, projector, display with HDMI, VGA and AV interface, as is clear from the name. The AV port can also be used as a 3.5mm headphone jack.

It can help you watch YouTube videos, Hulu Plus, IDMB, Quickflix, Family On TV, ABC, NBC, FOX on a bigger screen. You can even use the bigger screen for productive tasks using apps like Microsoft Office. However, apps like Netflix, Amazon Prime video, are not supported.

If you’re someone who uses the lightning port to connect to a number of devices, we recommend getting something like the 4-in-1 adapter mentioned above, just so you can easily manage all your adapters.

How to Install WhatsApp for Linux on Ubuntu and Linux Computers

5 iOS Apps for Mechanics for Car

9 Best Android Games With No Ads and In-App Purchases