Apple iPhone 6 Vs Samsung Galaxy S6 Vs HTC One M9

These phones may give a competition to the already popular Apple iPhone 6 in specification and build wise as these are full metal body type smart phones like iPhone 6. Both the Samsung Galaxy S6 and HTC One M9 are released with the latest Android OS version Lollipop or Android 5. Though this phones satisfies different types of peoples at world markets, it will be fun to have a comparison of these 3 models specification wise.

These 3 phones are having attractive and durable builds unlike the plastic versions of other smart phones. They are coming with the latest hardware and software and few customizations too. Samsung has TouchWiz interface on top of the Android OS and HTC has Sense in the same place.

There is no separate UI available for iPhone 6 as it is working on their iOS 8 ecosystem. Even though HTC could not make that much impact as Samsung does, HTC phones has many admirers in the world as a best Smart phone which they are capable to do many customizations in their own. Samsung is trying to recapture the lost glory of their flagship phone Samsung Galaxy S5 which the users complained that it is too plastic feeling, not the premier look.

HTC One M9 introduces with a dual tone Metal body with Silver and Gold tones in the same phone. They have updated their Sense UI to version 7.0 which it can present the appropriate screens according to the location. HTC has improved the Audio to Dolby 5.1 audio via HTC BoomSound. HTC also announced a Fitness tracker device integrated with 5 Sensors including a GPS named as HTC Grip. HTC Vive is also introduced in the event which is a Virtual Reality Head set with around 70 sensors, in collaboration with Valve. 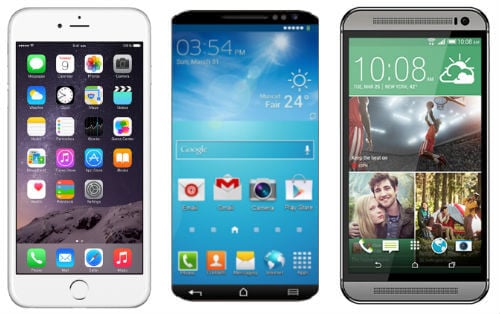 Samsung in the event showcased the Galaxy S6 and its sibling Galaxy S6 Edge with a curved display. Unlike Note 4 Edge,  S6 Edge has their both edges curved which increases its display size more in the same form factor. New redesigned menu’s and screens are incorporated along with more gestures like the new gesture on heart beat sensor. The S6 Edge is having the capability to display the colored indication of notifications in the edge displays according to the preset conditions. Both phones come with front and back Corning Gorilla Glass 4 protection.

The HTC One M9 will be available in the middle of March this year starting from Asia Pacific regions.

Samsung Galaxy S6 and Galaxy S6 Edge will be available from April 10th at 10 countries. We will expect a great competition among these Phones and their fans in this year.

How to Make A Group Chat on iMessage from iPhone

How to Freeze Multiple Rows at Top in Google Sheets

How to Do All PDF File Editing Using MAC