Text editing on a PC is a very important aspect of most people’s jobs. As long as you’re using a computer, you need a good text editing app. For most people, this requirement is fulfilled by something like MS Word. If you’re a programmer though, you need a different kind of text editors, more precisely called code editors.

Today we bring you a list of the best Linux text editors that you can use to write and edit code. 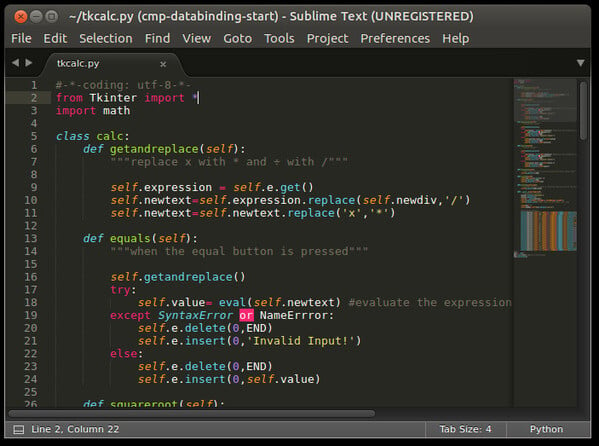 Sublime Text is a pretty popular text editor and not just on Linux. In fact, it might just be the most popular text editor amongst programmers. This feature-packed code editor supports a number of different programming languages out of the box. After all, “code, markup, and prose” is what it was built for. If you still feel like something is missing, you can extend its functionality via plugins maintained under free software licenses.

A pretty popular and unique feature of it is “Goto Anything.” It basically lets you quickly navigate to files, lines, or symbols. Other main features include but are not limited to command palette, Python-based plugin API, simultaneous editing, project-specific preferences, etc.

If your system supports snap apps, Sublime text can easily be installed using the command given below.

If not, you can check out the Linux download page linked below which lists commands to install it on various distros. 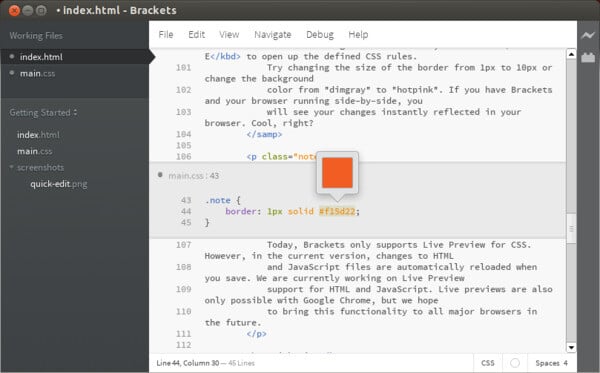 Brackets, a text editor, is one of those apps by Adobe that aren’t quite mainstream. The reason for that is that Brackets was designed for web designers and front end developers. That is a niche audience unlike Adobe Reader, which is used by the general public. Brackets is one of the best code editors if you mainly work with web programming languages such as HTML, CSS, Javascript, etc.

Its main draws are features like live preview, inline editing, focused visual tools, preprocessor support, and other exciting features. It does support plugins so it is theoretically possible to extend functionality here as well.

Like Sublime Text, Brackets is also available as a snap app. You can, therefore, install it on any Linux distro with the following command.

If your system doesn’t support snap and you’d rather not make it, you can also get Brackets as a Debian package for Debian and Debian derivatives like Ubuntu from the link below. 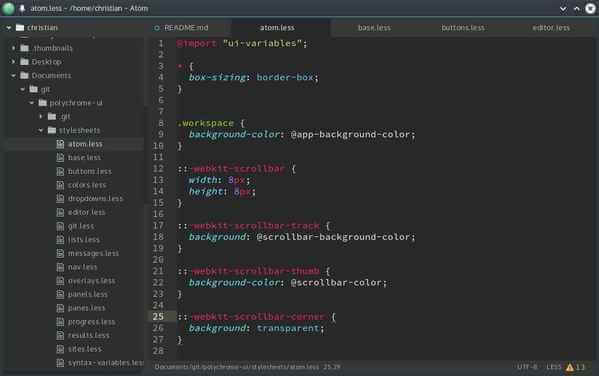 Atom is an electron (CoffeeScript, JS, Less, HTML) based open-source text editor by popular open-source website GitHub. Some describe it as a text editor for the 21st century. Being open-source makes it hackable to its very core but for all the right reasons. There are thousands of open-source packages you can pick and choose from to add new features to Atom.

Major features of this code editor include cross-platform editing, a built-in package manager, file system browser, multiple pane support, smart autocompletion, etc. You can also find and replace text pretty easily which does come in quite handy for programmers.

To install Atom as a snap app, you can use the above command. Alternatively, you can download it from the link below. 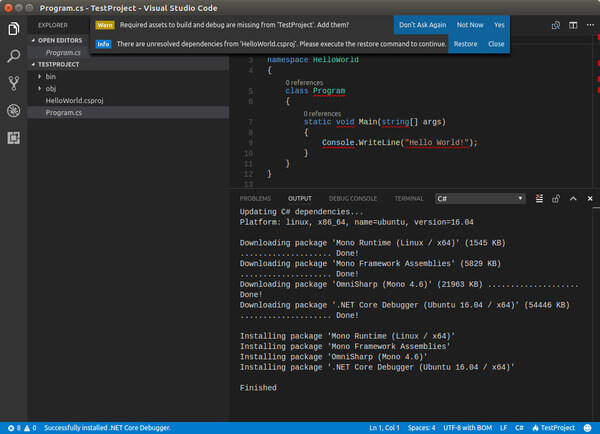 Microsoft has been pretty active in the realm of open-source software lately. Visual Studio Code is also an open-source Linux text editor but it’s also available for Windows and macOS. It’s one of the coolest looking code editors available on any platform.

Looks don’t matter all that much if something is not actually good though. Despite being lightweight VS Code performs a lot better than many of the competition. It also features a Zen mode which hides all menus and windows so you have a distraction-free environment.

There is out of the box support for languages like node.js, JavaScript and TypeScript. It supports a huge library of extensions which can enable support for more languages, commands, debuggers, etc. 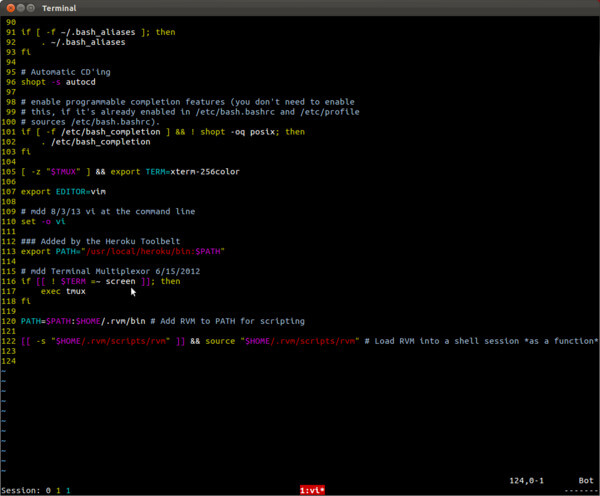 Vim or Vi IMproved is an advanced Linux text editor. It aims to be an upgrade over the de-facto Unix editor Vi. It is more powerful and extends farther in terms of capabilities. Vim is highly configurable and is built for developers. Unsurprisingly, they often call it a “programmer’s editor.”

Vim can be used both from the command line (CLI) and a graphical interface (GUI). If you’ve never used Vim, the learning curve can be pretty steep considering it is only a text editor. Once you get past that though it is perhaps the most powerful text editor around. 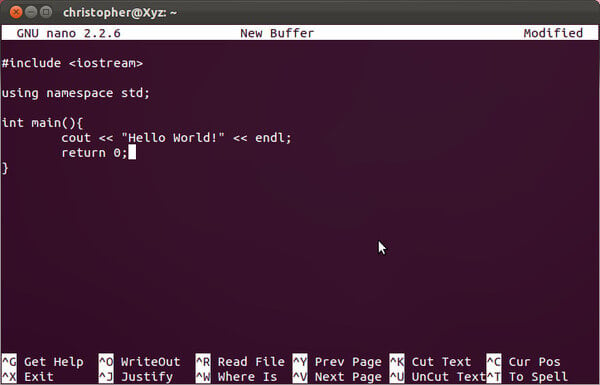 nano is another popular command-line text editor on Linux and it comes loaded with functionality. It’s definitely not for people who aren’t very comfortable using the command line for everything. But if you are someone who spends hours in the Terminal, nano will fulfill all your needs.

Ubuntu users can install nano using the command. Everyone else can just flock to the official website linked below. 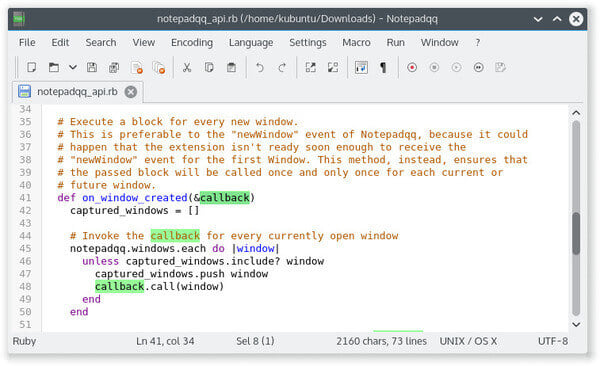 On Windows, a very popular text editor is Notepad++. It’s a really user-friendly text/code editor for the platform. It is also useable simply as an advanced Notepad, hence the name. Notepad++ is not available on Linux though but there is a worthy open-source alternative. You guessed it, its Notepadqq.

While the two programs don’t share any code, being a Notepad++ for Linux is definitely the inspiration behind Notepadqq. It is obvious in the user interface, and you also get the same features. If you’re a Notepad++ user who wanted the program on Linux, you’ll feel right at home.

Notepadqq is available as an easy-to-install snap app and can be installed with this command.

Instructions to download and install native versions for different Linux distros can be found on the download links below. 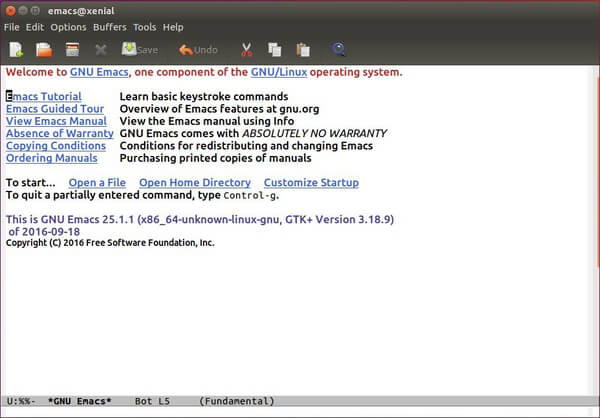 If you’re a long-time Linux user, there’s a good chance you’ve already used or maybe even love Emacs. GNU Emacs is the most popular version of it. It was created by GNU Project founder Richard Stallman so you know it is pretty old.

Check out the link below to download GNU Emacs for your Linux system. 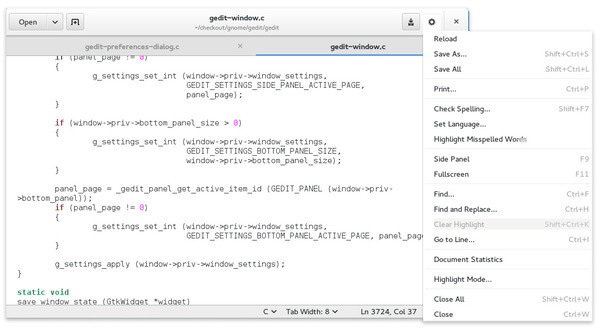 Gedit is the default notepad app on GNOME desktop. It is pretty useable as a code editor as well. Like all GNOME apps, this general-purpose Linux text editor focuses on simplicity and a minimal UI.

The app is written in C like many other code editors on this list. While it’s not quite as feature-packed as a VS Code it is good enough for most people. Gedit offers configurable syntax highlighting for various programming languages like C++, C, HTML, Java, XML, Python, Perl, and others.

It’s lightweight and supports highly functional modules that make it one of the best Linux text editors around.

You should already have it installed on Ubuntu and other distros that ship with the GNOME desktop. If you don’t have it pre-installed, you can visit the official website linked below. 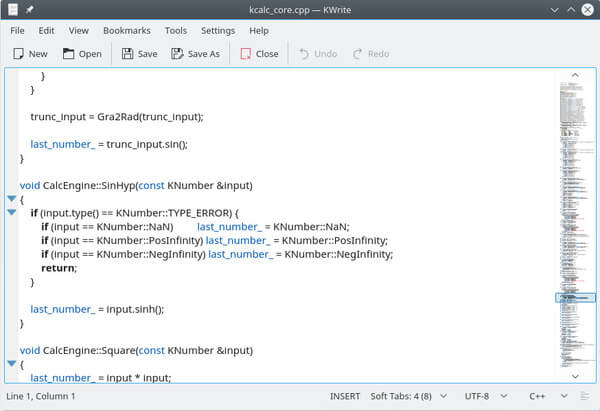 Like Gedit, KWrite is also a pre-installed app but this one comes with the KDE Plasma Desktop instead. It’s a lightweight text editor like Gedit but follows KDE’s design philosophy instead of GNOME’s. Therefore, the interface will seem familiar to Windows users.

The program is based on KATE, another text editor by KDE. KATE is the default text editor on the Plasma desktop. KWrite offers many more features compared to Gedit. These include word completion, auto-indentation, syntax, highlighting according to file type, Vi input mode, and support for plugins. It also has support for encoding, allows remote file editing, and is extensible.

Ubuntu users can install the app using the command above. Download packages for other Linux distros at the download link provided below.

There are obviously many other text/code editors available on Linux. It is, after all, an OS for the developers. But if you don’t like anything on this list, there’s really not a lot better outside it. These are the best Linux text editors around.

How to Make Phone Calls from Windows PC

8 Best Health Apps for Apple Watch to Track Your Health