Here we present some of the best slow motion video apps that you can install on your Android devices.

With over 10 million downloads and a Play Store rating of 4.0 stars, Slow Motion Video FX is one of the best and easy to use slow motion video apps. This best slow motion video app can even make fast motion videos. Uploading the videos to social networking sites such as YouTube and Instagram is quite simple and easy. The Android video app can record your entire bowling or dance session or a part of it. There is an option to opt for the Pro version that essentially gets rid of the ads.

If you are going to record a video using the app, it is recommended to keep the resolution between 720×480 and 1280×720 to have a nice and tidy shot. The pace of the video can be changed with a simple scale that ranges between 0.20 and 5.00. Values lower than 1 slows down the video and values greater than 1 fastens the video.

KMPlayer is now available for Android devices, which were limited to the desktop earlier. This slow-motion video player app which has the option to be customized over 30 languages. This Android player app can play the videos in the range of 0.1 to 4 times that of the original video speed. In addition to speeding up or making the videos slow down, KMPlayer even allows to multi-task. Just for an example, when you use KMPlayer, you can browse through Google Drive and also play your favorite video simultaneously. 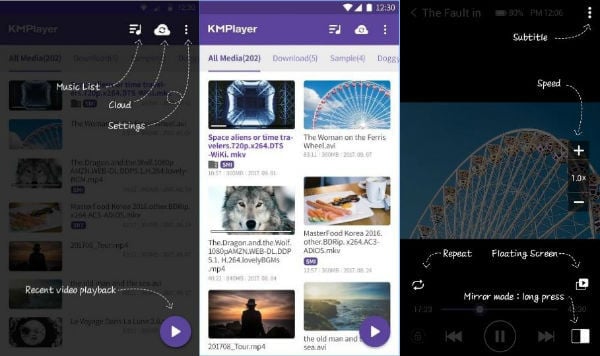 With KMPlayer it is possible to do all the things that were earlier possible with video players such as the VLC player. Watching movies, TV shows, video clips all can be done with this slow-motion video app. The app even supports HD videos and subtitles in the videos, and possible to do some adjustments to the subtitles. The initial load-up takes a bit of patience, but it’s worth the time spent. The app dashboard comes loaded with many handy tools. KMPlayer is a decent app that can be your default video player.

KineMaster is by far the robust, feature-rich, widely used slow-motion video editing app for Android devices. A free version of the app is available in the PlayStore that comes with a KineMaster logo on the output videos. However, It is recommended to go for the subscription-based full version. The full version of this best slow motion video app is packed up with interesting and powerful features that definitely will make your video editing experience worthy. The speed controller in this Video editor app is simple to use. The interface is loaded with editing tools that help to create professional standard videos. 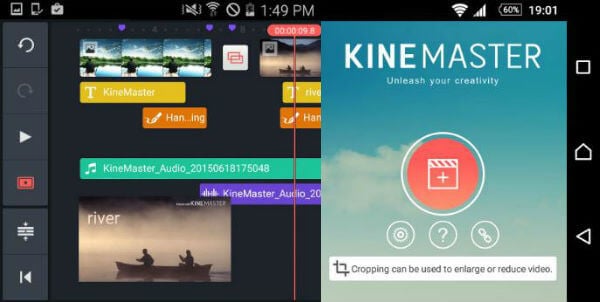 KineMaster supports almost all the audio, video and image formats and supports devices running Android 4.1.2 and above. There is an Asset Store that is loaded with features ranging from music tracks to overlays and effects. This slow-motion video editing app supports real-time audio-video recording that allows for an easy preview. Brightness and saturation control, animation styles, precision trimming, audio filters, transition effects are few to name from the rich selection of features and applications this app provides. KineMaster works only in the landscape mode, and it’s quite good in terms of the optimized use of the screen space.

Slow Motion Video is one of the simplest and easy to use slow motion video editing app. This app can play the videos directly from the gallery in slow motion. The app can also record videos and play it back in slow motion. 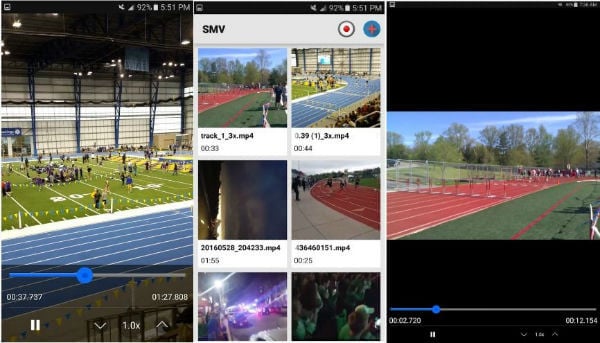 If you are looking for a video app that solely solves the purpose of playing videos in slow motion, then Slow Motion Video is the app to opt for. The dashboard of the app is quite simple, and won’t take a dime of your time to get started, and the app is free in the Play Store.

Well, Videoshop – Video Editor may take up about 10 MB of disk space more than most of the video editors in this list. Videoshop is one of the coolest and sleekest video editors in the Play Store. This app slows down the videos, and can even make the common edits to the videos with its vast collection of editing tools. Sharing videos on social media sites, recording stop motion videos in Vine, reverse playback and merging multiple videos into one are few of the best features of this slow motion video editor app. 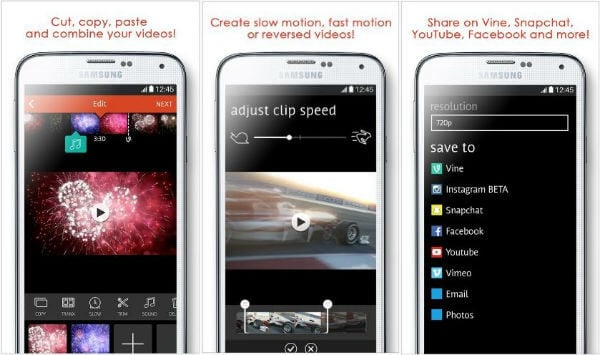 The app has a vast collection of sound effects in its library that can be played with the video, and you can even record and embed own voice with the videos. Also, there is the option to choose music from the music library. The videos can be made fun to watch with animated titles and the 10 different transition effects that the app allows. This app is a complete mobile package for all your video editing needs. One of the best features of this app is that it allows editing videos in real time.

Unlike Videoshop – Video Editor, Fast & Slow Motion Video Tool is not able to edit the videos in real time. This app can set the pace of the videos in the range of 1/8x and 8x to that of the original video’s speed. 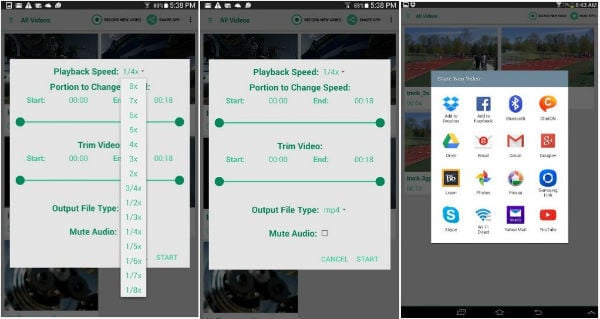 One feature that you will like most is the unique dashboard. The dashboard is intuitive and is quite simple too. The unique feature of this app is that it allows saving the videos in the format you like. The formats ranging across the common ones such as avi and mp4 to asf, flv, wmv. Fast & Slow Motion Video Tool is a simple yet powerful video editing app that changes the speed of the videos to slow and fast motion.

Video Dieter 2 is allowing video slow record, that is to record a time-lapse video. This video slow recorder can even compress the large size videos while keeping a tab on the video quality. The app allows adding songs to the videos. From the wide variety of video editing features the app supports; making a slow-motion video is also on the list. 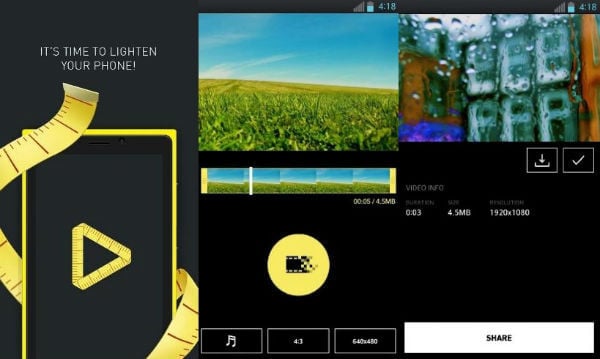 This slow video recorder is simple enough to make changes to the resolution and video quality of the output videos through this app. With Video Dieter 2, it is possible to slow down the videos to 0.25x, and can fasten up to 4x of the original speed. Video Dieter 2 can also trim out lengths from videos and is a good option to free up disk space.

Are you an athlete, a dancer or a cricketer who wants to make the cover-drive perfect? If yes, then Coach’s Eye is the app for you. This slow motion app is dedicated primarily to the sports professionals. Coach’s Eye app is based on a subscription model which comes in two tiers, the free and the VIP version. 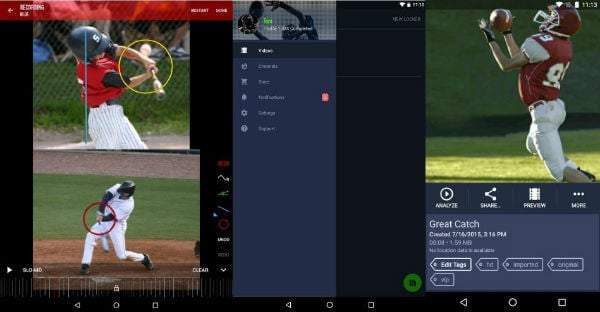 The VIP version contains more features than the free one, but you will have to pay on a monthly basis. The free version supports 5 different mobile devices with a single registered account and comes with 2 GB of cloud storage space. Something good enough to free up spaces in the local storage. The VIP version of the app gives access to a whopping 150 GB of cloud storage space. Coach’s Eye provides the option to share and evaluate the videos and to access from a global database of mobile coaching tools.

Slow Motion Frame Video Player is yet another app in the Play Store that can control the video frame rate to make slow motion videos. The power consumption by the app is managed in the most efficient way by the developers. The app’s interface is quite simple, and to share the videos on social networking sites is a one-click step.

In addition to changing the speed of the videos, you can do a lot more with this app. The app can be used to apply a wide variety of color filters. The app supports HD/SD videos, and can even alter the audio pitch. Slow Motion Frame Video Player is a compact video editor to include on your Android device.

The last in the list of the 10 Best Slow Motion Video Apps for Android is the PowerDirector Video Editor App from CyberLink. PowerDirector is a powerhouse in the segment of video editor apps for Android. The bandwagon of 4K supporting video editing apps in the Play Store is on the rise, and PowerDirector is living up to its reputation of unmatched dominance. With the app’s innovative timeline editing interface and the new movie maker, it is possible to edit and create professional videos. One of coolest feature is the collage maker. The collage maker can make picture and video collages, and it even allows me to add my favorite music from my playlist to the videos.

Performance slowdown is not something to worry when it comes to PowerDirector. It is a free app to grab in the Play Store.

These apps can capture a slow-motion video or it can even turn the mundane videos in your gallery to amazing slow-motion videos. These apps come packed with basic video editing features such as rotating, trimming, splitting and many more. Loading up your Android device with any of these apps will enable you to play around with the video speed.

How to Find Nearby AirTag with Android Phone

How to Maximize SSD Life Span & Performance; Avoid These 7 Mistakes

How to Connect iPhone or iPad to TV to Stream Media Files.