How to Convert Your Android Tablet into A Dash Cam

Have you ever considered of installing an Android dash cam in your car. Many of you might think, why install a dash cam in the first place, as it is just plain waste of money. If you think so, then you are wrong as a dash cam is important for a car and as well as for the driver. They can be used to document almost everything that is on the road.

One can record insane car accidents and use it as a means for settling the insurance claims. Dash cams have also been used for capturing the footage of the meteors passing by.

They are prevalent in several countries like Europe, Asia and other places. Serving as a great tool on your side and in case of being in an accident, it will clearly show the person’s mistake, allowing you to know who’s at fault.

Mostly the dash cams present in the market are available for $50 to $500, but you can avoid buying them just through a simple trick.

You can turn your Android tablet into a dash cam. We all take our Android device along when going out for a ride anywhere and with other features; it can be used to perform dash cam duties.

Related: 7 Things You Should Know Before You Buy Dedicated Car Dash Camera

You don’t have to spend a single peny, if there is an old and unused tablet already present in the house. It is a great option than spending a few hundred dollars on the dash cam, as the Android tablet has camera also the much needed GPS for your aid.

Along with the tablet, you need a mobile stand to place on your car dash and an app that will help in the process of converting it to dash cam. The most prominent app for the use is DailyRoads Voyager, available for the people to record road videos from 2009 to convert your Android tablet to a nice Car Dash Cam.

The application works as a blackbox of the car, continuously records the videos during your journeys without any interruption. It automatically records everything and you can choose the important events to be retained as an evidence for the future.

You can download DailyRoads Voyager from Google Play Store on your Android tablet. Install the app on your device and launch to explore the features it offers you. 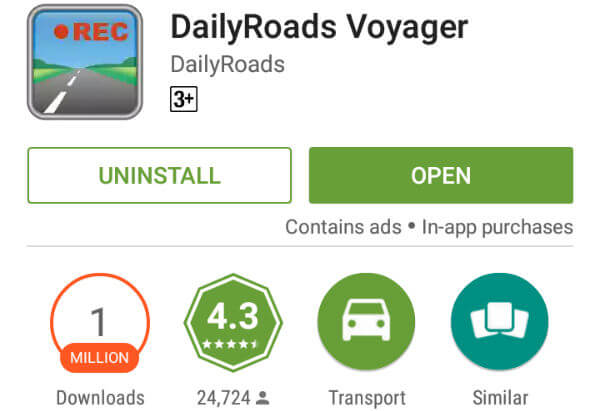 As soon as you open the app, it instantly takes you on the video recording settings telling you what to do when you are not able to record video properly. Tap on the continue option to move ahead.

The recording screen is placed in the middle and below the screen is cuddled with several options. You can start recording by tapping on the resolution tab and click images while on the move by clicking the option next to recording. The app also allows you to set the scene mode, white balance and etc to get the best results while shooting. 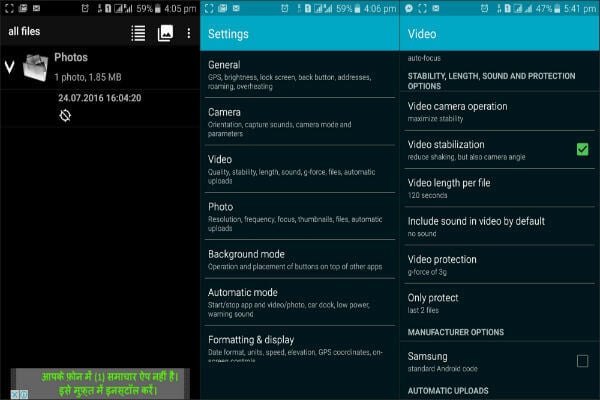 You can also set the time limit of videos in order to get split the video into multiple segments that is easy to select the important part and transfer to any other devices. Users are given control over their external storage, allowing them to give the app their own decided amount of space to use.

DailyRoads Voyager turns your Android tablet into Android dash cam without any extra effort and gives you the exact information about the travelling speed with the recording. It even works in the background and when the device is on sleep avoiding the driver to check on it from time to time to ensure its working. 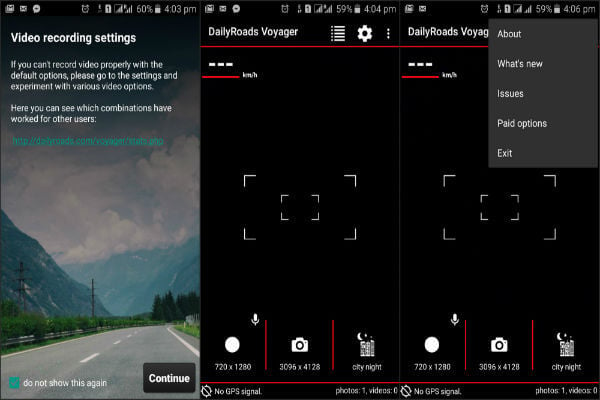 When you are selecting a mount to keep your tablet in your place, it will be a good idea to select the one that also charges the device and is able to withhold the weight of the device. You can also connect the tablet with your car through the USB cable in order to ensure that the device has the juice to record the journey.

AutoGuard Dash Cam Blackbox is a great alternative to DailyRoads Voyager, known as the best Blackbox application giving you some great features. It shows the video as well as the map on the same screen and automatically clicks the photos at important situations.

Related: 7 Free Android Apps Help You to Locate Your Parked Car & Parking Garages Near You

If you want to be double ensure about your safety and have something to viable as a evidence in your car at almost zero cost, then Android dash cam is a thing that can’t be neglected. You can follow the above guide in order to get your own personalized Android dash cam without any trouble.

8 Best Search Tricks of Windows 10 that You Missed