Please go through the steps to enable Continued Conversation on Google Assistant and see how they work on your Google Home.

Please make sure you have Google Assistance on your Android or iPhone. For the demonstration purpose, we are using the iOS screenshots here. The Android Google Assistance setting is almost the same as the iOS app, and you will be able to follow the steps here for your Android phone too. You can install Google Assistant on your mobile phone from PlayStore or iTunes based on your platform. Those who already have google assistant ad setup with your Google Account and Google Home, follow the instructions below to continue.

Open Google Assistant App on your phone, and tap on the blue icon on top right of the screen to “Explore.” As per the screenshot below, tap on the three-dot menu to get “Settings.”

If you already set up your Google Assistant with your account, you can see the “Preferences” to set the Preference based on the user. Tap on the Preference to get the screen for customizing your choices. Here you can select the Assistance Voice from available voice selections, Getting Around option for setting your mode of transportation, etc. 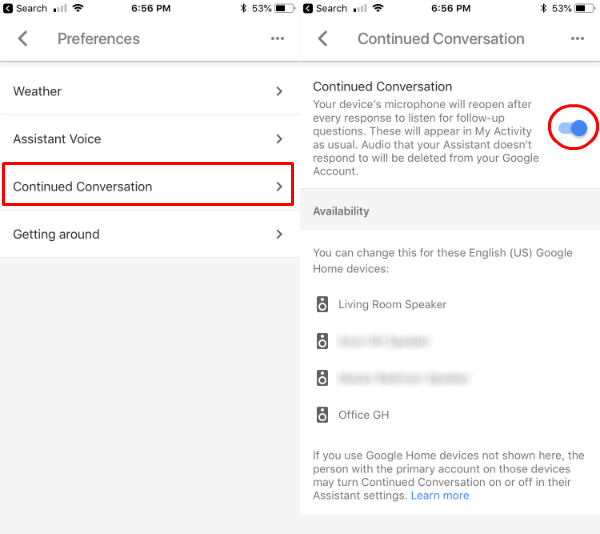 Yo have to turn on the Toggle Switch to enable the continued conversation on this screen. Google is advising that “Your device’s microphone will reopen after every response to listen for follow up questions.”. If you are not comfortable with keeping your microphone re-open for the follow-up questions, better not to turn on this feature.

Also Read: How to Get YouTube Music on Google Home for Free?

As of today, Jun 26, 2018, the Google Home Continued Conversation is available only in the US with English language only. The support to other languages and counties will eventually roll out. Now you can try a couple of commands,

"Hey Google, How is weather tomorrow? Is there any appointment for tomorrow?"

"Hey Google, Set the thermostat to 72 degrees. And Dim the lights in the kitchen”

Google Assistant will wait (maximum 8 seconds) for the next command after executing every command that you ask. You can see the LED lights on top of your Google Home device are spinning/bouncing. This is indicating that the Google Home is listening to you.

You can try a series of questions to Google Home with just one Wake up command. After one user wakes up the Google Home, multiple users can join the conversation to continue with Google Home. The continued conversation is not supported while on call (set Google Voice Number for Google Home Calls) or playing media on Google Home.

The continued conversation will not available with Google Assistant during a phone call, listening to media or alarm/timer goes off.

How to Filter Out Groups and Channels in Telegram