How to Import Google WiFi Networks to Google Home

Before you start, make sure you have Google WiFi app and Google Home on the same device. We did this with the iPhone app and looked like the Android update is going to hit the PlayStore very soon with this feature.

Now you can see the WiFi icon on the Google Home App screen. You can tap on this screen to access all the features of Google WiFi. 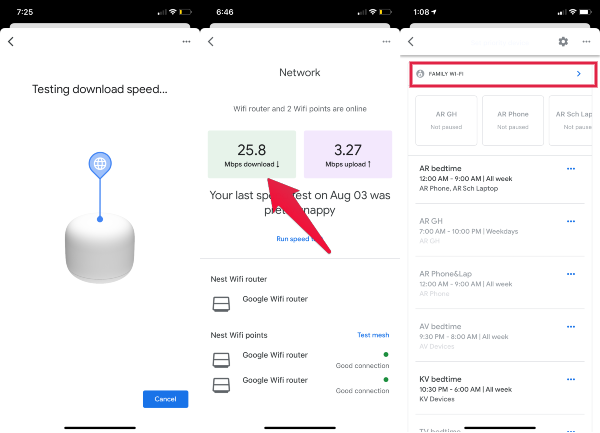 We performed a WiFi speed testing right from the Google Home app. It works exactly as you have on your dedicated Google WiFi App. If you don’t have Google WiFi, you can have the updated version of Google Nest WiFi from Amazon. The second-generation Google WiFi is branded under Nest, and that works perfectly with this update.
Today's Deal: $160.00 Off

You can access the individual Google WiFi router and Family WiFi Settings once you scroll down on the network screen. We noticed that you have pretty much all settings and featured imported to Google Home app that had in Google WiFi app.

Can I import old Google WiFi models to Google Home?

Is Google WiFi app works even after importing to Google Home

We’ve tested the Google WiFi stand-alone app even after importing the WiFi to Google Home. The Google WiFi app is working as usual.

Yes, Google Assistant can access a few of the Google WiFi features after you import Google WiFi to Google Home. You can check the WiFi internet speed by asking, “Hey Google, what is my WiFi speed?” Google will tell you the speed after performing the speed test.

This update may be the beginning to get rid of the Google WiFi app eventually from the store. Most of the features are working under Google Home apps, so there is no reason to keep two apps for the same purpose.

How to Block Spam Robocalls and Unknown Callers on iPhone