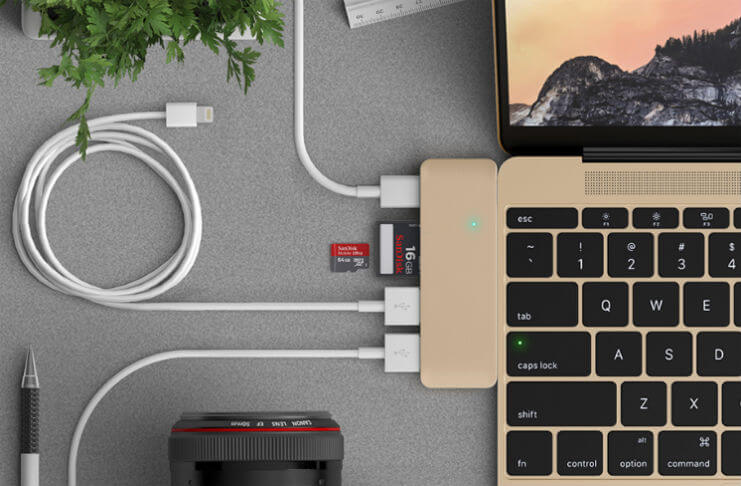 May be apple is visualizing a port-less world, but it is too early for gadget users. This is definitely a brave decision from Apple who replaced all ports and connectors into a common standardized USB-C.

Eventually, USB-C will be a widely recognized standard for all communication needs. Apple integrated Thunderbolt 3 in USB-C standard, which supports blazing data transfer speed up to 40GBIT/Sec, slim in size and can be inserted on both sides.

There are a bunch of gadgets and adapters to go with your new Mac Book Pro that provides almost all ports that are missing from your original Mac. You can spend and choose the all in one Mac Gadgets or specific ports based on your requirement. We listed all gadgets here with a USB-C connector that goes to your Mac Book Pro.

This USB-C  Combo device offers you almost all ports that you required for your Mac Book. With Satechi Combo Bub, you can expand Type-C port to two USB 3.0 ports, one SD Port, one Micro SD card slot and a charging port (Type C). This combo device coming with the Aluminum body, Slim & Compact. This device made plug and play that does not require any software, drivers, or complicated installation process.

This is designed for photographers. This card reader is compact enough to carry in your pocket. This reader is 5-in-1 Multifunctional Design with USB 3.1 Type-C to USB 2.0 (USB On-The-Go) TF/SD Memory Card Smart Reader Adapter that supports Android phone charging via Micro USB port.

This adapter is compatible with Apple MacBook (12″, 2015/2016) and Google ChromeBook Pixel (2015) and other devices with USB Type -C. This hub has 3 USB 3.0 ports let you connect up to three USB enabled devices simultaneously and sync your photos, music, and data. This sleek aluminum design goes perfectly with the 2015 MacBook built-in with surge protection that keeps your devices and data safe, plug and play support hot-swapping.

What Are You Going to Lose with New MacBook Pro

It is perfectly your choice to go with a new Mac book pro with a touch bar. But while you chose MacBook Pro 2016, you are going to lose these standard ports and features.

There are certain people who don’t want to worry about this SD Card change. A first category is a group of Professionals who uses CompactFlash or XQD cards with an external reader. The second category is using DSLR cameras with built-in WiFi transfers, that can direct transfer raw images to Mac. The third set of people is using their mobile phones to take pictures, those already have plenty of solutions to transfer images from Smart Phone to Mac like Airdrop, Dropbox, iCloud, etc.

HDMI (High-Definition Multimedia Interface) port is used to transfer both uncompressed digital audio and video through a single port. Most people’s TVs and external monitors have a couple of standard HDMI ports.

This port is used to connect TV or external monitor to personal laptops both in Windows and Mac that supports both audio and good graphics quality. Good luck with the 2016 Mac Book Pro, there is no HDMI and USB ports exist in the new model. Now you have to depend on all in one USB-C Digital AV Multiport Adapter from Amazon Store to connect your HDMI cable to be Mac.

This port very rarely used by a normal user. This RJ45 port is coming very handy when your WiFi router breaks or you want to troubleshoot your internet connection and cable modem. There is Apple USB to Ethernet adapter that can get from the Apple store.

Apple was offering the complete freedom to upgrade your RAM until Mid-2012. There is a support article from Apple, to upgrade RAM on Mid-2012 and old models. You were free to avoid upfront cost by ordering a 2GB RAM model and upgrade to 8GB or 16GB later with third party memory product. Now, you have to order the required size of RAM in the first phase, Apple will ship your laptop with RAM soldered on the motherboard.

Early Mac buyers were enjoying the freedom to upgrade their hard disks to any size they want. Those early Mac laptop harddisks were easy to replace with less user effort. These internal hard disks were attached to a removable connector and users were able to replace these HDDs to larger size HDDs or SSDs.

Unfortunately, Apple took off this connector from its Mid-2013 models onwards. New model Mac laptops were shipped with 128GB or 256GB SSD internal storage drives soldered permanently on the motherboard.

Good news, iFixIt reports that New Mac Book Pro without the Touch Bar model is coming with a removable connector for internal storage where the user can upgrade SSD.

New Mac Book Pro models, the traditional power button that used a long time on Apple laptops is missing. The new Mac Book turn on when you open the cover and shut down when “Shut Down” from the Apple menu. Apple wisely turned off the startup chime by default, so people would not disturb a meeting or lecture when they open their Mac.

MagSafe (Magnetic Connector for Electronic Device) was one of the most attractive and innovative designs that used for a decade in Apple computers.

This tiny magnetic power plug was enough to protect your laptop from accidental trip overs. This power connector attached magnetically to the laptop strong enough to hold, and can easily detach if somebody trip over the power cable. If you own a new Mac Book Pro, just don’t trip over your MacBook while it’s charging!.

I know, this change has zero effect on the new Mac Book Pro performance. However, it looks like Apple quietly replaced Apple Logo illumination from Mac’s lid. Now, this logo will look like iPhones’ Apple shiny metal logo without any illumination. Don’t think that your Apple logo will light you in dark rooms to walk, just in case!

Apple removed one of the essential keys that favored by a lot of windows and hanging-software users; ESC Key. The new innovated Touch Bar replaced the traditional Escape key along with the default functional keys.

In short, if you own a 2014 / 2015 Mac Book pro, please treat your laptop like a premium product. These Mac Book Pro models were built with all ports you need in one place.

I am pleased with my decision to switch to Apple in 2010 and later upgraded to Mac Book Pro 2012. Thanks to Apple for early Mac Book models designed with user-replaceable connectors both for RAM and Hard Disk. When Apple launched more resource-hungry operating systems, I upgraded my RAM from 4GB to 8GB and HDD to SSD.

Maybe Apple is diverting to a new direction with Touch Bar to get ride of touch screen technology. However, all new Mac Book 2016 owners have to order a gadget pouch to carry all different kinds of dongles with USB-C port, at least for a while. I’m not ready yet.

What Are App Clips on iPhone? A Guide to Using Lightweight iPhone Apps Without Installing