7 Most Common Issues with OnePlus 6 & Fixes

Anyone using OnePlus 6 as a daily driver is accustomed to knowing the cons of this magnanimous smartphone. I have been using the OnePlus 6 for long time and I know it has its own set of glitches and bugs. It sometimes throws tantrums that could be temporary or it could disappear right away but at the end of the day, it is there.

Here, I have listed all the common issues and problems OnePlus 6 users complain about. Also, I have listed the possible fixes in case if you were looking for it.

There are many instances when I have seen the network bar either drop or go completely blank for SIM 2 slot. It could trigger if you are walking around in an area with less network coverage for SIM 2 for instance Vodafone. This seems to affect only the SIM card in the second slot. It could also occur if you are entering into the OnePlus Fnatic Mode whilst playing any intensive game. Here, the phone could dynamically cut off the cellular network from SIM 2 temporarily which is an issue rather than a way to optimize the resources required for the gameplay.

Also read: How to Use Zen Mode On OnePlus 7 Pro & OnePlus Devices

Call drops are pretty self-explanatory. It occurs when you dial any digits or tap to call on any contacts, you’ll see the call screen but the call will disconnect immediately. Note that the call hasn’t been connected which means even if you try to call someone several times and call drop swings in, the recipient won’t know. Although I suspected it to be a network issue. Turns out this issue is pretty common and doesn’t limit itself to any specific network carrier or region. 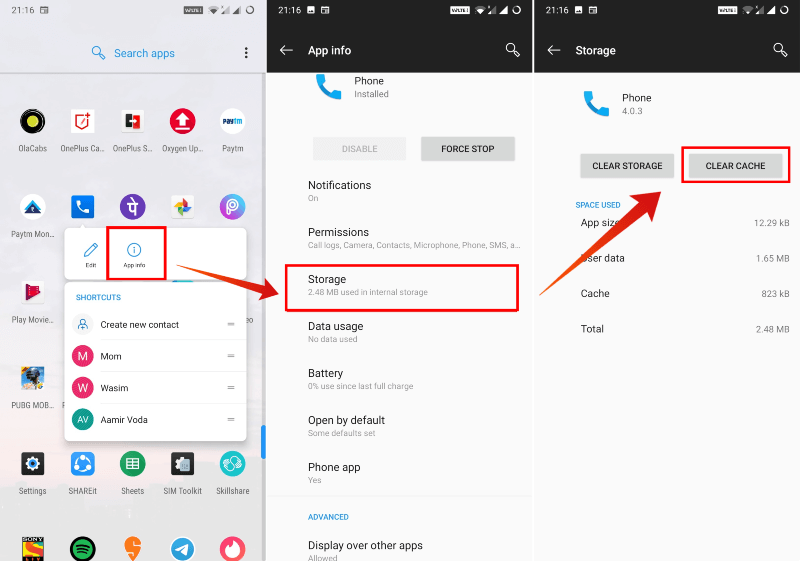 As said, OnePlus 6 is my daily driver so I know the bugs and glitches in and out. It’s a common issue whereby the network strength will be excellent and yet, you wouldn’t be able to use mobile data. Sometimes the 3G/4G symbol won’t appear on the status bar when data is enabled. At other times, the symbol might appear but will have a ‘limited’ sign as a suffix which signifies there’s no internet access. This tends to occur many times over a large number of users which is why I have listed it here.

To fix a broken or limited or ‘no internet’ issue even when the mobile data is enabled, toggling to Airplane Mode could help.

In case there’s no internet access or no symbol on the status bar, follow the said method.

Go to Settings >> Wi-Fi & Internet >> SIM & network and deactivate either of the SIM cards that you were trying to access mobile data on. Note that deactivating default SIM won’t work so you need to change the default SIM to use this method.

Okay, don’t misunderstand it for a OnePlus 6-only issue as it is universal. It could affect even the most high-end phone and yes, OnePlus 6 is not an exception. Wi-Fi connectivity is fairly stable on OnePlus 6 if you are in sight of the router/modem. However, once you start moving a bit far or say use your phone across walls or doors from the router, the signal strength is affected severely.

But turns out OnePlus 6 has a lot to do with Wi-Fi connectivity disruption issues. It tends to disconnect from any Wi-Fi network abruptly at times. This issue can affect any task that requires constant internet access such as online games or video streaming. There are a lot of workarounds and methods available on OxygenOS so here’s what you can do to fix the issue.

Since you are using OnePlus 6 with OxygenOS-based Android (v9.0 or 10), here’s how you can find a workaround for the issue.

Since Wi-Fi issues are common on smartphones nowadays, a simple workaround can help fix these temporary network-related issues.

OnePlus 6 comes with a rather smaller battery of 3,300 mAh with a Snapdragon 845 SoC with a 6.3-inch AMOLED display. This calls for higher power consumption since users usually have too many apps running in the foreground and background. This could be the reason why OnePlus 6T received the title of the best gaming phone of 2018. It shares every spec of OnePlus 6, except the notch, under the display FPS and a larger 3,700 mAh battery.

You can check out which apps are consuming the most power. Here’s a way to check it out.

Some if not all apps on OnePlus 6 tend to shut down almost abruptly. Google Chrome is one of the many apps that freeze temporarily or shut down abruptly which means all the work done is gone. I have seen a similar issue on PUBG Mobile many times where the game is loading and suddenly, it freezes the mid-loading screen. This is where a quick force stop comes handy.

I would recommend OnePlus 6 or practically any smartphone users is to simply get rid of apps once you are done with it. No, I am not asking you to uninstall the apps but to simply exit from the apps and squash it from recent apps as well. This should clear RAM and other resources that these apps consume even if they are in the background. This method when executed spikes the performance and hopefully should get you out of apps shutting down or freezing abruptly.

To summarize in layman terms, cache files are temporary storage files that store data of apps or websites you visit. This speeds up the retrieval process since the phone already has some data (as cache) to load to the main screen of the app without any overheads.

OnePlus 6 was released in April 2018 and became a smash hit. It undercuts its competition integrating a high-end Snapdragon 845 octa-core processor. It is a marvel of high-end specifications amalgamated with efficient software that makes it a lucrative device. OnePlus has upgraded its lineup a lot till now and yet, OnePlus 6 is a powerful contender. However, you end up with some issues on OnePlus 6. Until you get the right patch, you can try the above solutions to solve the OnePlus 6 issues.

How to Create HTML Signature in Gmail?