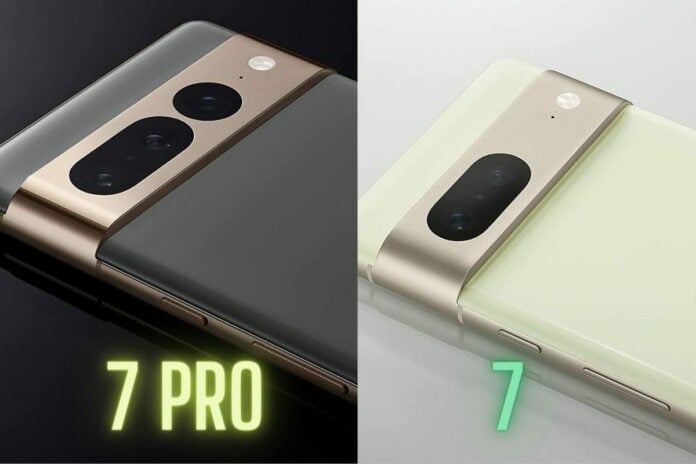 Google has launched the Pixel 7 and Pixel 7 Pro with more confidence than they have in the last few years. Because, this time, the new Pixel devices are available in more countries than previous Pixels. But, between the two, which one should you buy?

Let’s compare the Pixel 7 vs. Pixel 7 Pro, and hopefully, you will have your answer.

Pixel 7 vs. Pixel 7 Pro: The Difference

First, what’s different from the Pixel 6 lineup? What’s apparent foremost is that the black glass visor on the back is no longer black. On the Pixel 7 and Pixel 7 Pro, the visor housing the camera is made of the same metal as the sides of the phones. This makes the transition from the frame to the visor at the joints seamless, unlike the previous Pixel 6 lineup.

Google also seems to have given up on the two-tone approach, which has been present on the back of every Pixel phone before. Of course, there is also a newer, faster processor as well as some brand-new camera tricks.

Last year, the Pixel 6 and Pixel 6 Pro looked quite similar from the back. This year, the difference between the two devices is apparent due to the camera lenses being much easier to see, thanks to the colored, metallic visor.

Pixel 7 Pro has an extra telephoto lens that the Pixel 7 does not. Apart from that, the Pixel 7 Pro also features a curved display which, as usual, looks cool but can be a problem in practical use.

Related: Pixel 6 vs Pixel 6a: Should You Buy the Cheapest Pixel?

We used to live in a world where the smaller flagship phone was a little underpowered and just a little less in every way. Thankfully, we’ve left that world behind. Like most other flagship devices from other companies, the Pixel 7 and 7 Pro are more alike than different.

When you pit the Pixel 7 vs. Pixel 7 Pro, you find the same second-generation of Tensor chip. So, when it comes to performance, both phones should be able to compete with the best of the best. This year’s Tensor G2 is also on par with the competition from Snapdragon, Exynos, etc. Speed was one of the downsides of the original Tensor chipsets in the Pixel 6 lineup. So, it’s nice to see that’s fixed.

The cameras are the only major difference between the two phones, like last year. And it makes sense since the Pixel phones are all about those cameras… mostly. The Pixel 7 has two rear cameras. There’s a 50-megapixel primary shooter aided by a 12 MP ultrawide camera. On the front, we have a single 10.8-megapixel camera.

The Pixel 7 Pro features the same 50 mega-pixel primary shooters as well as the 12 mega-pixel ultrawide cameras. In addition, it also has a 48-megapixel telephoto lens that allows the phone to zoom up to 5X. Both phones also feature Google’s software zoom implementation called Super Res Zoom.

Both phones can record up to 4K 60fps video from the rear cameras and are armed with the new 4K cinematic pan feature.

For those who have never used a curved display, it comes with its own problems. The design has been popular amongst Android flagships. However, the screen’s curvature creates problems when viewing content, especially when you have a bright light source that shines off the curve and breaks immersion.

The other problem is accidental touches. Even though Android manufacturers have been making curved displays for years, accidental touches are still a problem. Even the mighty Pixel magic software is not much help. When you hold the phone, your palm or fingers are touching the sides of the display, creating unexpected reactions on the screen.

For these reasons, many people might actually prefer the smaller, flatter display on the Pixel 7.

Pixel 7 vs. Pixel 7 Pro is a much closer comparison than the price gap would suggest. At the same time, the differences are pretty clear and obvious. But that’s what you would expect with a $300 price gap. For $300, the 7 Pro gives you an additional 48 MP telephoto lens capable of 5x optical zoom and 30x Super Res Zoom.

What is the Best Deal? Which One To Buy?