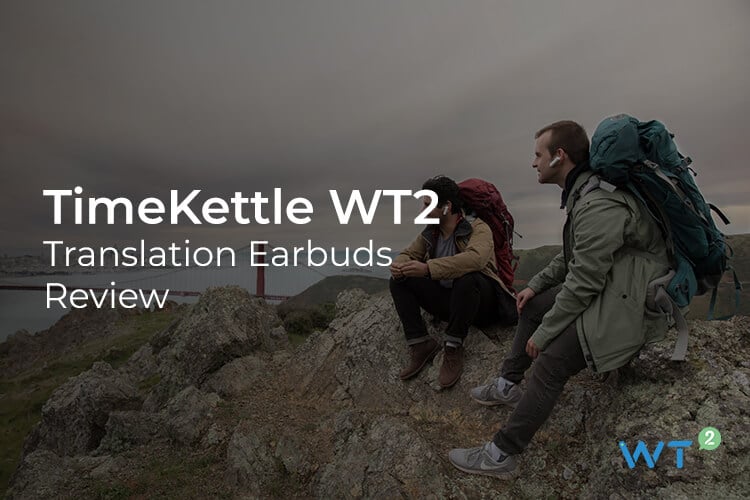 It has been over a century since English has become the lingua franca among different language speakers across the globe. However, you still have to deal with the ones who are not that fluent in English. In such cases, all you can do is to get the help of a translator who understands both languages. That can build a communication bridge. The China-based translator device manufacturer TimeKettle now introduces a new AI Live Language Translator earbuds. It can recognize and translate almost every language either way.

The TimeKettle WT2 Plus is considerably one of the best live language translator earbuds you can buy to speak with different language speakers wherever you are.

Time Kettle WT2 Plus is the successor version of the WT2 – World’s first Ear-to-Ear wearable language translator earbuds for bilingual conversations. Currently, there are many other translator earbuds available to use on a daily basis. But the TimeKettle offers you nearly real-time experience. Thus you would not need to wait for minutes to listen to the other person’s conversation. 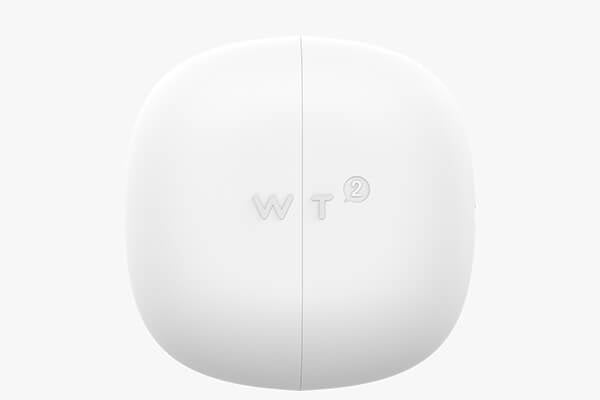 The TimeKettle WT2 Plus implements the “1+2” interaction method. That is, it does not only a pair of headphones to have your multilingual conversations. It also includes an app from the manufactures, that can act alone to translate your conversations into text formats. Thus, you could be able to show others what you meant, without even sharing the headphones.

Unlike most other translator headphones in the market, the TimeKettle WT2 Plus makes use of their AI-powered algorithms to recognize the speech and translate it into seamless, humanized conversations.

At a glance, the TimeKettle WT2 Plus Langauge translator earbuds may look similar to Apple’s AirPods wireless headphones. Maybe even slightly bigger than the AirPods. But it not the same when you try to open up the charging pod. The unique, award-winning split-up design of the TimeKettle WT2 Plus makes it one of a great deal to go with. 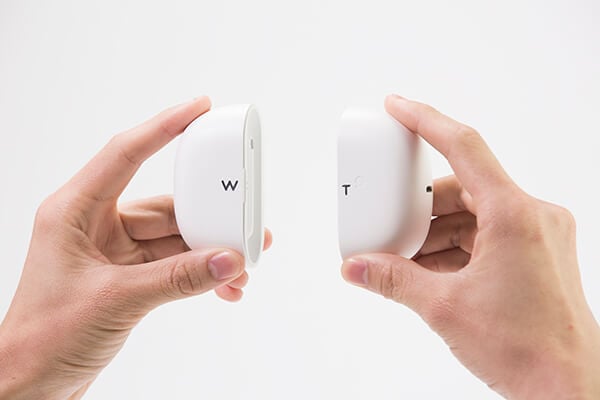 The company calls it the “Design for Sharing.” Since the headphone pairs need to be with two different people at a time for an effective, translated bilingual conversation, the design helps a lot.

You can split up the charging case by middle, and share it with the other person. There is no hassling lock or slide movement to split the case. Just pull it apart to split-open the case to start using. There is a separate battery for each half so; there is no need of closing the case lid to charge both of the pairs.

When it comes to the earbuds, it is almost like any other standard headphones in the market. The truly wireless design helps to keep it simple and compact. The microphone is at the lowest tip of the great earbuds, which could capture more sound when you speak.

Being one of the first companies to come up with such truly wireless earbuds for bilingual conversation translation, TimeKettle has improved its range of products all along the way. Therefore, the TimeKettle WT2 Plus, a live language translator earpiece device, has the best-in-class features and communication facilities to make it worth buying. Here are some of the best features listed out.

It is not quite common to see someone walking around carrying a translator earbuds through the town. However, this is one essential gadget that we urge you to have if you are a frequent international traveler. You would need a wireless language translator earbuds to explore different countries. So, it is essential to get a clear understanding of the real-world performance of the TimeKettle WT2 Plus. 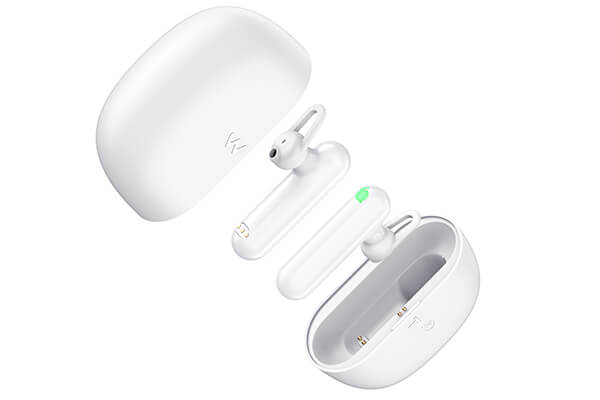 The entire device works based on the “2+1” protocol, i.e., you will have to have both of the earbuds pair and the TimeKettle WT2 app on your smartphone. In order to start using the headphones, you have to pair the headphone with the smartphone through Bluetooth or Wi-Fi. The company says that the app pairing is an essential step required; to get error-proof voice recognition and break-free translational voice output.

The smart algorithm by Timekettle keeps errors at bay and outputs almost accurate translation both ways. For better, enhanced performance, it has a smart voice recognition feature, which manages to avoid other noises to capture your own voice for translation. Therefore, they may not have to worry about the background noise while speaking with a stranger.

We have tested the device from various scenarios, which went almost more than 95% success rate, that not much language translator earbuds have to claim. Even it successfully ignored the words from other people talking nearby. 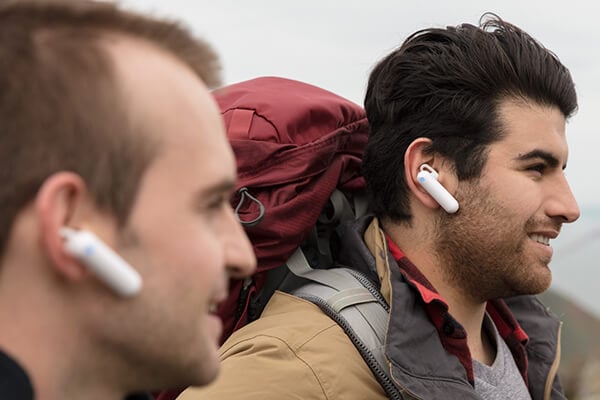 Talking of the translational delay, you would not feel that much lag in everything. The headphones keep the company’s claim of “almost real-time” experience. There is a delay of at most 3 seconds depends on the accent. The “2+1” connection protocol seems more helpful than a standalone device, as it makes use of seamless internet connectivity to fetch and translate more accurately.

There are three speech modes available to use on the TimeKettle WT2 Plus language translator earbuds – Simul Mode, Touch Mode, and Speak Mode. Three different modes are designed for business social and family/educational needs. You can either speak seamlessly for a continuous conversation translation, translate only when you need it. However, you cannot expect a complete humanized translation all along the way but is essential for business and personal needs.

Well, we have tested the translator headphone with Spanish and Hindi in speaker mode. The translator is performing almost above 90% accuracy for all the regular conversations. We saw some difficulty while translating technical words, street name, or shop’s name. The translation is quick, almost in real-time, and clear. 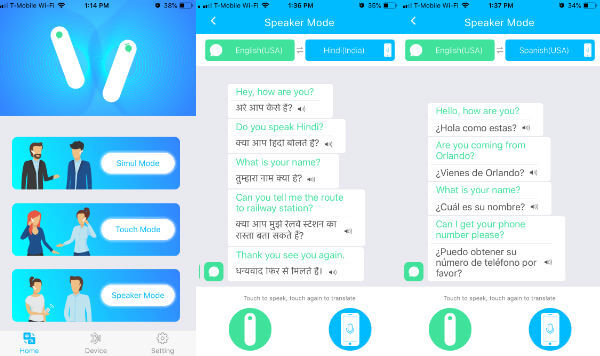 Based on our experience, you can rely on this translator device when you travel from your home country. You can’t expect that translator to work for you with 100% accuracy. However, this is pretty much enough to handle your translation requirement. The app is supporting 36+ languages to translate and pretty much enough for all around the world.

The battery life is one of the most highlighted pros wherever the device was showcased. Unlike most truly, wireless earbuds, the TimeKettle WT2 Plus translator earbuds can retain its battery charge up to 5 hours in a single charge. Additionally, the charging case has the battery pack enough to boost up the earbuds twice or thrice to 100%, which would, essentially, make it up to 15 hours of total backup on the go. 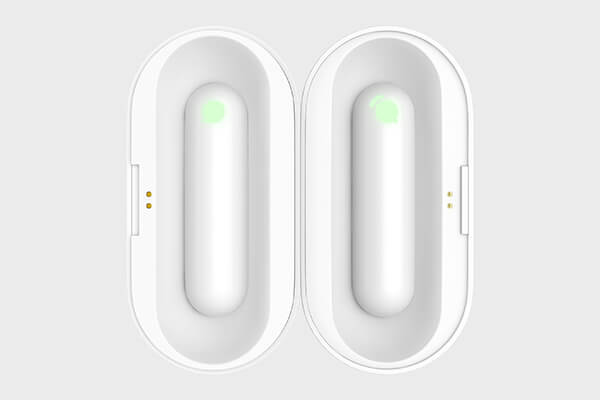 Since nobody is going to go around with the translation earbuds on the ear for five hours in a row, the battery backup is a good-to-go factor here. After all, every time you put those earbuds back into the pod, it gets charged to full.

TimeKettle’s WT2 Plus Wireless language translator earbuds are available to purchase from TimeKettle’s official International store at US$219.

The payment can be done through PayPal, and international shipping is available at no extra cost. For US customers, the translator device is available in the Amazon store for less than $200.

TimeKettle WT2 Plus Earbuds: Innovative Realtime Language TranslatorHaving a common speaking language is important to build a bridge between the communication gap among people from different ethnicities. TimeKettle WT2 Plus is an innovative device that can fill the communication gap because of the language barrier. this truly wireless device supports almost 36 languages and their accents as of now.