Apple AirPods was the much-hyped premium earphone from apple. Some saw it as an inevitable step to the wireless future after removal the removal of the headphone jack. Although AirPods is designed to support Apples’ iOS, it is compatible with pretty much every Android device. You can use AirPods with Android and get most of the features like, check battery status, control songs, receive calls, trigger Google Assistant, etc.

In this article, we’ll see the best Android apps that are compatible with the AirPods and provide most fo the features for Android users.

First off, we have AirBattery developed by Georg Friedrich. It is a utility app for Apple Airpods, showing you its current battery life. It also has and in-ear detection for automatic media playback. The latter only has support for a limited list of apps like Netflix, YouTube, and Google Play Music. AirBatterys’ Bluetooth Low Energy interface only works when the location is on. It means that you’ll have to keep the location whenever you need the app. 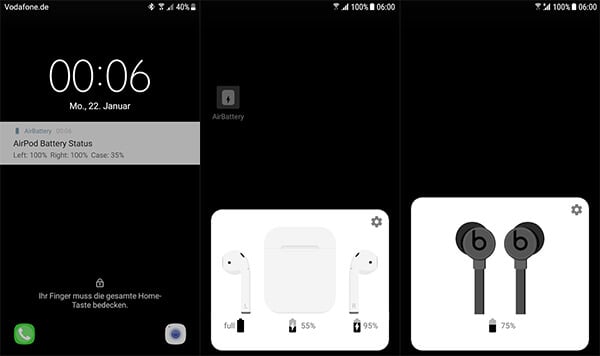 AirBattery also has a pro version which extends the functionality os the basic app. It has a notification with all the info so that you can comfortably see it. To know the battery status of the AirPods case, one AirPod has to placed in it. The case itself doesn’t have any communication capability. Along with AirPods, AirBattery also supports Beats by Dre devices,  BeatsX, and others.

Along with AirPods, AirBattery also supports Beats by Dre devices,  BeatsX, and others.

Assistant Trigger by DotArrow Inc is a utility app for Android that supports 2nd gen AirPods. It Displays the charge percentage of the AirPods and the case in the app and also as a notification. Assistant Trigger also detects when the AirPod is in the ear and resumes the media playback. 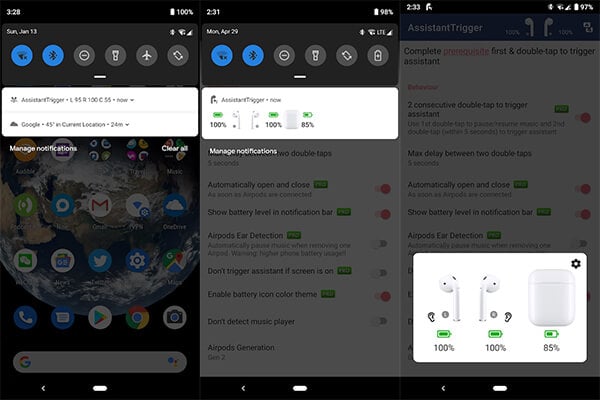 There is a nifty little feature for activating personal assistants on double taps. Single tap pauses or resumes the music. The notification shows the charge percentage with tiny icons that looks nice. Charge percentage is not accurate to the point and is shown with a buffer of 10%. There’s nothing the app can do about it though, that’s just the way the AirPods report the battery charge.

Note that in-ear detection and battery percentage on the notification are premium features. Purchasing the Pro version will set you back around $2.

Poddroid by Keonwoo Lee is an AirPod app for Android with the unique ability to theme the UI. Currently, there are three distinct themes, white, black and pink. Podroid also has the function that stops/pauses playback on the removal of AirPod from the ear. Yet, there is a warning accompanying it that this will cause high battery consumption. Setting a higher delay would help in extending battery life. 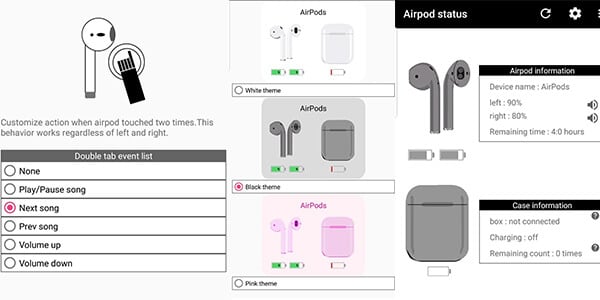 Like assistant trigger, Podroid can set user-defined functions for the tap features. Tapping on the gear icon on the top right will take you to the settings page where it can be customized.

AirBuds popup by Developer J captions itself Fast, Simply and Beautifully. And we can attest to that! AirBuds popup has a simple yet ergonomic feel to it. It does what it’s meant to do beautifully. 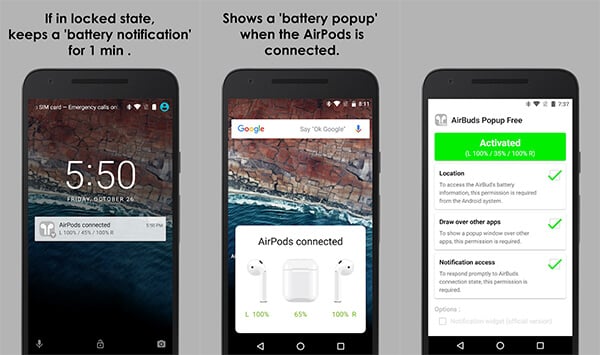 AirBuds Popup needs the notification access and the location permission to work properly.

Podscontrol is perhaps the most beautiful app that we’ve seen on this list. The UI that looks exceptionally neat is stripped down to the bare essentials. The main screen has split into four parts. The topmost portion displays the device name and connection info. It is followed by a battery charge section that contains the charge percent of the AirPods and its case.

There is a switch toggle for enabling the monitoring system. It can be disabled to save battery life. Next, we can set the tap assignments with customizable options for double tap and quad taps. But, the app doesn’t let you assign taps for each of the AirPods, taps on both AirPods are handled alike. 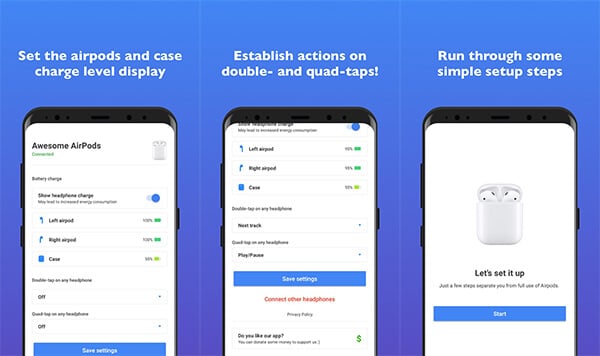 What we loved the most about Podscotrol is the ease of use. On the first startup, you’ll be greeted with a screen asking you to choose the AirPod from the list of connected Bluetooth devices. You can also scan for undiscovered devices from this page. After you’ve selected the device, you’ll be taken to the main page of the app with all the features.

Furthermore, PodsControl doesn’t have a paid version. All the features it offers are provided in the main app itself. There is an option to donate some money to the developer if you’ve found the app to stand out from the competition.

Droidpods is a utility app designed to work with AirPods by the developer Ctrl-s. It is a notification oriented app that does most of its functions from the notification area. Control for Apple AirPods is in the notification drawer and doesn’t need any overlay. Droidpods additionally sends you a notification when one of AirPods battery go lower than 10%, this also applies for the case. 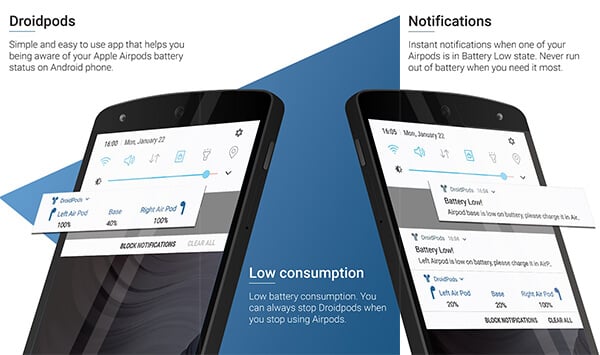 It seems that Droidpods developer doesn’t seem much enthusiastic in furthering the development. The last update to the app was on 1 February 2018. If active development doesn’t matter to you, we suggest you try Droidpod. Apps with simple use cases such as this one don’t benefit from continued development anyway. Except maybe to fix bugs. As the app is entirely focused on the notification drawer, it’s as simple as it gets. Droidpods doesn’t have a free version and costs around $2.5 for purchase.

AirPopup is a colorful little app with tap controls for AirPods. It comes with many of the features that AirPods do not natively support on Android devices. This includes features such as battery life, listening assistance, notification, connection popup. The app displays both the remaining battery percentage and average listening time left. Tap gestures can be customized for Play/Pause, Next and Previous tracks, and also for seeking forward and backward. 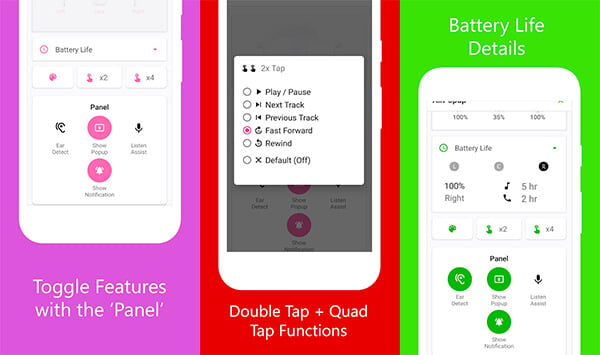 The displays the Airpod info as either a popup window or in the notification drawer. The notification looks sleek and beautiful. There is an option to disable the continuous monitoring for saving battery life. AirPopup also comes with ear detection feature for stopping playback when the user takes off the AirPod. You can also choose an accent color from the menu for a little bit of personalization.

It’s one of the best Android AirPods apps we’ve seen in the Play store. Like Droidpod, AirPopup doesn’t have a free version to get a taste of the deal before spending money. Users have to go all out and buy the full version at around $2.

We hope that you’ve enjoyed this article and found your choice for the best AirPod app for Android. There are a lot of options in the Play store and we’ve hand-picked the best from the crowd. If you have any suggestions or comments, make sure to let us know in the comments below!

How to Record WhatsApp Calls on Android and iPhone

How to Recover Lost Space on SD Card with Windows 10?