NFC is one radio, in many of the users’ phone, which has been little exploited even after years of the technology’s inception. It’s no surprise that the possibilities NFC technology presents are still not used widely.

NFC-enabled phones were a rarity couple of years ago and were limited to flagship devices of various OEMs. But plenty of smartphones belonging to the budget-range sports NFC these days.

What is NFC Tag?

NFC aka Near Field Communication technology is used in NFC Tags. These are essentially small plastic discs with an embedded passive circuit and microchip to control it. They are classified into 4 types as Type 1 to Type 4 based on their memory capacity and writing speeds. They operate at a very small range, say around 4 inches, which enhances the security. The NFC tag technology is no rocket science, but a simple electric circuitry.

The NFC Tags come in various standards like NTAG, Mifare, Ultralight, Desfire and Topaz. These are essentially different standards boasting of various qualities like memory, write speed, cryptography etc. However, at this point of time, the NTAG series is the universally readable NFC Tag across various smartphones.

How do NFC Tags work?

The NFC Tags are not self-powered as they are passive devices. A passive device works on the principle of electromagnetic induction, that is, the circuit is activated when current flows through the nearby device. The power required to activate the Tag is drawn from your smartphone NFC radio. Once powered, whatever data is written in the tag is transferred to the phone and it can trigger various actions on the phone.

The RFID wireless technology used in NFC technology means that NFC uses much lesser power than Bluetooth communications. Also, the inductive coupling method ensures that the pairing happens much faster compared to Bluetooth. Security breaches will be lower since the range is limited to about 4 inches versus 10 m in Bluetooth.

How to Write on NFC Tag?

NFC Tags have varying amounts of storage spaces based on the type they belong to ranging from 48 Bytes to 32 kiloBytes. Based on this, the amount of data or commands that can be stored in the tag varies. Most of the NFC Tags available in the market can be recycled or rewritten multiple times (manufacturers claiming up to 10000 write cycles). If you’re worried about your security, you have options to encrypt your data.

What can be written into a tag doesn’t have a definitive answer. The sky is the limit of what can be achieved using an NFC Tag combined with smartphone NFC. What can be achieved is completely dependent on how imaginative you’re. There are several apps available for Android users to write NFC Tags. However, NFC in Apple devices is currently limited to Apple Pay.

NTAG-The NFC Tag for your smartphone

NFC NTAG series has different variants in NTAG203, NTAG210, NTAG212, NTAG213, NTAG215 and NTAG216. The NTAG203 is the most popular and cost-effective among these. Memory and scan strength increase in the higher variants, but so does the price. 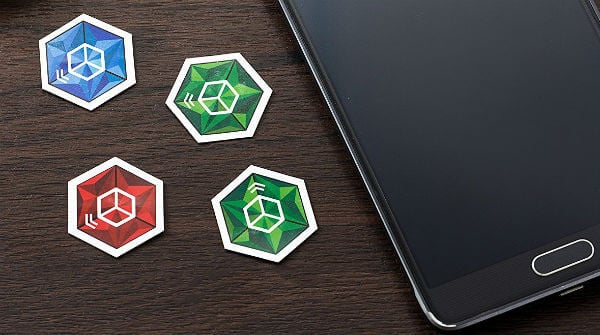 The available memory ranges from 168 bytes to 924 bytes in the NTAG series. This translates to a maximum URL length of 132 characters to 854 characters or 4 to 10+ vCards’ storage space.

Trigger – Task Launcher is a simple to use NFC tag writing Android app which has many pre-defined activities that can be triggered using NFC.

NFC Tools is another app available for the Android users which are slightly more complicated compared to Trigger – Task Launcher.

However, if you are slightly venturing and patient enough to figure out how Tasker can be configured, there is no limit to what you can do with a simple NFC tap. For those who find Tasker to be Greek, use MacroDroid or Automate, which have pre-defined tasks, whose trigger can be set to NFC tags.

How to Select right NFC?

The answer is dependant on where and what purpose you are going to use this device. There are industrial standard NFCs, which can be deployed in shops and malls with attach-clips. The standalone NFC tags are available with attached glue sticker, which can be used for personal purposes.

Currently, NFC Tags with a memory space of 4096 bytes or 4k is available. The Desfire 4k is one of this kind. This is equivalent to storage space of 2000 characters URL or 4000 characters text. The NTAG series has a maximum total memory of 924 bytes. Out of this, 888 bytes is available for the user, which can be used to write about 850 characters data. A simple instruction to turn on Bluetooth will be about 45 bytes in size. This means you would require roughly 150 bytes for 5-6 instructions on average.

Whether you want to use NFC tags at home or shops, it is advisable to keep the tags away from moisture. Wetness can affect the circuitry inside the NFC Tag and may affect its longevity. Industrial NFC Tags boast of data retention up to 50 years.

The NFC Tags are built in Plastic or PVC with waterproof protection, that can protect the tag’s internal circuitry from dampness and dust.

Make sure you are buying NFC tags that compatible with your Android phone for automating your devices. The NTAG series is a safe bet across various smartphones. However, if you are looking for higher memory, go for Mifare 4k or Desfire 4k.

As for industrial NFC Tags, dedicated NFC devices are designed to be programmed once. However, they are given lesser memory space, as they generally do not require to hold large data.

The NFC Tags can be written and rewritten plenty of times, say up to 100,000 times. You can password protect or encrypt your NFC Tag to prevent overwriting of data. This will mean that any NFC device can read your NFC Tag, but cannot over-write the data without the password. This feature is available in all NTAG variants, except NTAG203.

What can be Automated with NFC Tags?

Creativity and imagination are the keywords to this question. If you have clarity of thought and you are the kind of person who can visualise the flowcharts for execution, the NFC technology will do you a world of good.

Got a bunch of guests and you don’t want to reveal your Wi-Fi password? The solution is pretty simple if you have an NFC Tag. The InstaWiFi app available in Play Store lets you write your password to the NFC Tag and you can stick it on the wall, which your guests can tap on and get access to your Wi-Fi. 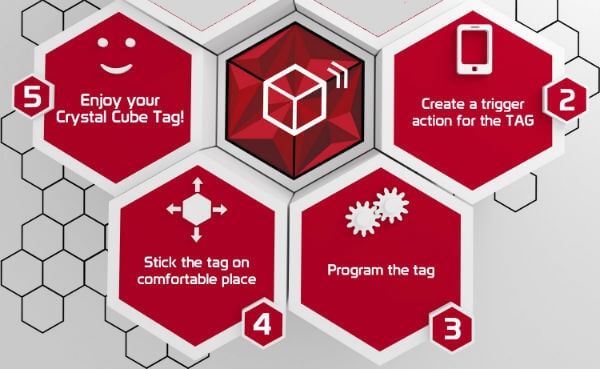 Back after a long drive and feel lazy to turn off the data, turn on the Wi-Fi, turn off the location and Maps, disconnect the car Bluetooth, set the brightness higher? Well, it won’t  take as long as the narration to get this done if you’re smart enough to write the required commands to NFC Tag at your door.

Stick an NFC Tag on your dashboard with commands to turn on location and navigation, connect your Bluetooth, turn off WiFi and turn on mobile data.

You don’t want your smartphone to ring too loud or ring at all in your office. You may not have a WiFi connection at the office, hence may want to turn on the mobile data. The scenario can be made more interesting by adding another command to send a text message to your loved one once you tap your NFC Tag. The message content can be automated based on a “Ïf condition” based on time. All these with a simple tap on the NFC Tag you can stick at your desk.

Payment using NFC Tags is already a popular thing using wallets like Google Wallet or Apple Pay. However, you can extend the use of the tags by adding more value added services like the link to your portal or grievance address systems. Individuals can add an NFC Tag to their physical business card which can directly take to your online LinkedIn profile or portfolio.

Those were few of the applications we thought would fire up your imagination on how to utilise an NFC Tag. We will put up a more detailed “How to write an NFC Tag” and different possible configurations that you can utilise in our next post.

The NFC technology has been out there in the market among smartphone users for a while but was limited to flagship phones until recently. With more and more smartphone models getting the NFC radio and NFC Tags being available at cheaper rates, we expect the technology to make major advances in near future.

Surprise Her: 14 Best Valentines Day Gifts for Her

Show Your Love: The Ultimate Valentine’s Gift Guide for Him

How to Create Your Own Stock Tracker using Google Sheets

How to Automate Android Phone for Office with NFC Tags