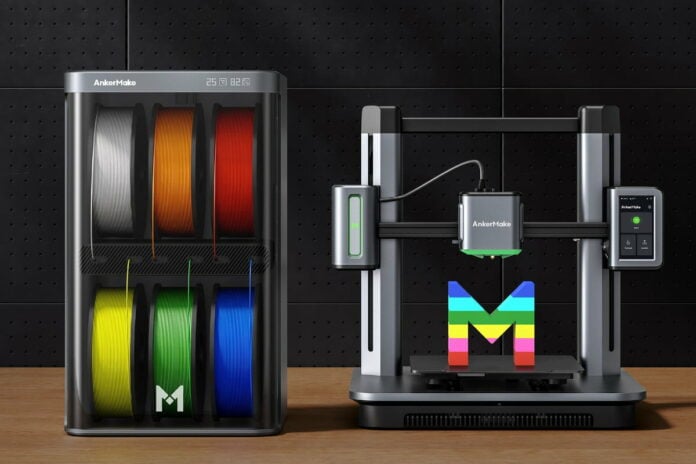 Anker is famous for its widely used charging cables, power banks, Bluetooth headphones, and mini-projectors. AnkerMake, the company’s new sub-brand, is intended to profit from the never-ending market for more advanced, eye-catching, and user-friendly 3D printing technology. The AnkerMake M5, its maiden try, makes the audacious claim that it will print five times more quickly than the competitors. Let’s have a quick view of it.

The AnkerMake M5’s printing speed, which is five times faster than comparable printers, is possibly its best selling point. The M5 offers a pretty decent operational speed of 50-250mm/s. The extruder temperature is a maximum of 500ºF, and the plate temperature is 212ºF.

The Anker M5 video shows the M5 quickly smashing through the initial layers, but we’ll reserve judgment on whether the results are respectable or as eerie as a haunted house on Halloween. It is telling that many of the images Anker offers on its campaign page show standard test prints scaled up significantly larger than they would ordinarily be printed.

The M5 spec is impressive, with 250mm/s speed offered by Anker with a print precision of ±0.1 mm. The M5 avoids the frequently disorganized appearance of desktop 3D printing thanks to a streamlined design with all modular-looking frame pieces and a closed-off print head encasing its direct extruder.

M5 has a 0.4mm nozzle and supports the filament diameter to 1.75mm. It can print ABS and PLA, PETG, and TPU material with an extruder temperature of 500ºF maximum. Everything appears to be relatively plug-and-play, which is probably the purpose. Of course, it is still unclear if this is the case. The built-in camera and app connectivity are unique, and we will see how Anker attempted to make this product user-friendly compared to the traditional 3D print concept.

The direct extruder on the AnkerMake M5 is “redesigned” and “super direct,” according to Anker. This speaks of a short filament travel path, which is advantageous, especially if printing quickly. The hot end should be close to the fine filament control to eliminate system slack, lower the risk of leaking, and ensure appropriate retractions.

Additionally, the extruder has dual hobbled feeder gears to pinch and push the filament as well as a 9.37 reduction ratio. The actual hot end doesn’t appear to be particularly nice. It has a conventional PTFE lining and heats to 260 °C, so it can easily handle materials like PLA, ABS, PETG, TPUs, and others. Additionally, dual part-cooling fans are also included in the print head, which should help the M5 handle challenging print features like bridging and overhangs quickly.

The M5’s X-axis gantry is supported by a significant amount of, shall we say, other equipment in addition to the print head. The touchscreen display, camera, filament sensor, and LED status illumination are built in for easy access and make it userfriendly. Moving so much extra weight about is difficult. In this case, including a second Z-axis stepper motor is encouraging. It should ensure stability and even move up to the extreme of the build volume.

On the AnkerMake, your prints have a build volume of 235 x 235 x 250 mm to fill, which is average for desktop 3D printing. Many businesses have concluded that most people don’t print anything larger than a balled-up fist; therefore, it stands to reason that the M5 will easily support most printing sizes.

The camera pod for the AnkerMake M5 is housed in the same housing as the touchscreen display and is located to the right of the X-axis gantry. One distinguishing feature of the M5’s design is a large green-framed lens pointed at the print bed. This lens contributes to the M5’s appeal in a number of ways.

Print monitoring is the camera’s main purpose, and it streams its feed to your Smartphone via Anker’s AnkerMake App (not yet available). According to the Kickstarter page, the system will also be able to capture time-lapse videos in high HD at 30 frames per second. Better than all is the true trick: mistake detection (and ultimately, mitigation, though we only see detection for the M5).

A secondary processor built within the AnkerMake M5 is responsible for examining the video feed and identifying common print defects such as layer shifts, spaghetti, blocked nozzles, and separation from the print bed. The printer will notify the user via its app if one of these print-ruining events is found. Though it is not a novel concept, it is one of the few applications that have surprised us.

M5 works with the Ankle Inhouse software AnkerMake Slicer. which supports both Mac and Windows. In addition to that, the dedicated mobile app can be used to control the printer. You can check the printing status with the smart home, including Google Assistant and Amazon Alexa.

The AnkerMake M5 campaign page makes a passing reference to the AIoT. An amalgamation of artificial intelligence (AI) and the Internet of Things (IoT), you could define this as a “smart device,” one with some level of self-diagnosis that increases performance or productivity.

The AnkerMake App, Anker’s answer to user control of the M5, tugs on this interconnectedness thread. We haven’t seen much of the app yet other than beta samples featured in a few videos and a few specifics on the campaign page. According to what we’ve been told, there will be active job control, setting adjustment, live camera monitoring, and some print problem handling.

AnkerMake announced that the V6 Color Engine, a companion device for the M5, will also be available. The V6 Color Engine claims to take the AnkerMake M5’s printing from 1 to 6 filaments in, well, as long as your print takes to finish, despite seeming like it will go from 0 to 60 in silly-seconds flat.

The point is that it’s a modern, integrated filament cabinet that complements the AnkerMake M5’s apparent speed to handle 3D printing in several materials. The V6 acts as an integrated component of the M5 printer, feeding information about temperature, humidity, and remaining material via the M5’s display and the companion app.

The M5 is in a murky middle ground between very inexpensive printers and more expensive systems where it’s easier to understand what you’re paying for because the MRSP, listed under all pledge options, is $759. The M5 printer is now available to pre-order for a price of $799 from AnkerMake.