360 Degree Cameras are the new face of technology in VR and Drone industries. Getting a globe view of a beautiful island or the New York Times Square; these 360 cameras captures details in 360 Degree angle. In addition to 360 Degree Recording, these are VR cameras are offering the best video quality in the 4K footage. The 360 Degree VR Cameras are famous among drone flyers, film shooters, cyclists, and even now start to use as dash cameras.

Based on the requirements of high-quality videos and 3360-degree recording capability, we listed the best 360 VR Video cameras available in the market.

Samsun Gear 360 is one of the best 360 VR Video Camera, coming with high-resolution 4K video. This nice VR camera packed in a sleek white beautiful case and extremely lightweight. The Samsung 360 degree VR camera can be also used for 180-degree shots. The product is also able to capture details in low light. With Samsung Gear, the photos can be taken remotely and directly shared on various social platforms and the photo quality ranges up to 30 megapixels. The product has a 4K resolution for videos.

Samsung built this VR Camera as water-resistant to capture stunning videos underwater with the same performance on Air. This 360 VR Camera has F2.0 lenses that are crystal clear and capture the smallest details. With the ability to take 180-degree shots, this VR camera is also able to merge two such photographs efficiently to gain a decent 360-degree photograph.

The 360fly 4K Video camera is a sleek black product with shows quality in the very first look. With a rough outer sphere, this 360 degrees 4K Camera produces precise details. 360fly offers a camera quality of 16 megapixels for photoshoots and 4K video quality, to be precise 2880×2880 pixels. With the support of the internal storage of 64 GB, the memories that are captured can be directly shared to social platforms. 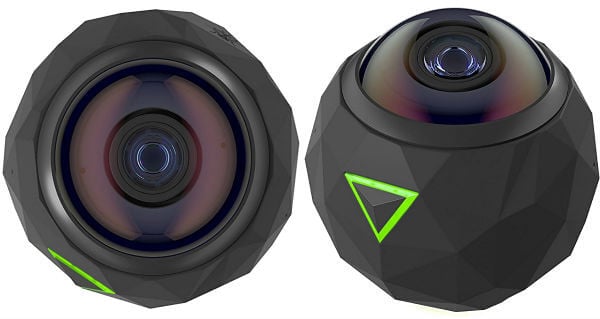 This 360 VR Camera is water-resistant to 3 feet and offers two types of recording. One is to capture a single 360-degree photo. The second type is when the photo can be captured in such a way that it shows the first person’s point of view.

The product has additional applications which include GPS, e-compass, and an accelerometer. The 360fly Camera Desktop Director App supports the recordings of this product and shows flawless trimming of the same for any edits in addition to Android and iOS support.

The sleek black 360 Camera from Nikon can shoot a 4K resolution video and stills in 360 degrees. With built-in Wi-Fi and Bluetooth support, Nikon has been voted to be a recommended product by many. Time-lapse and slow-motion sequences can be created by the Nikon KeyMission 360-degree camera. The camera is able to get a detailed and all-round capture of details within 2 feet from all directions. 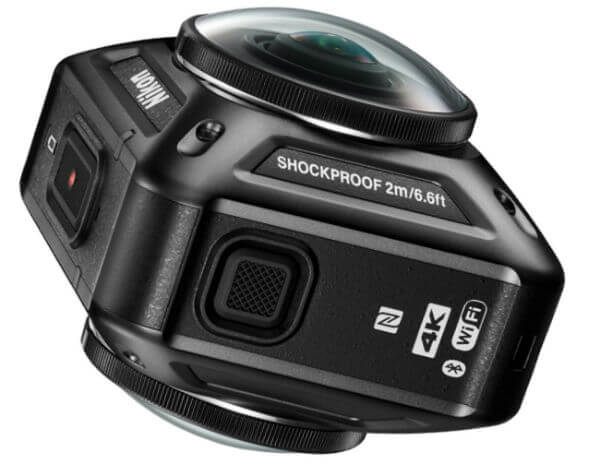 This Nikon 360 Video Camera claims to be freezeproof, waterproof, and shockproof from a drop of 6.6 feet. This HD Camera can go down in water up to 98 feet and can be used in freeze conditions of temperature 14°F. The captured photos and videos can be directly shared with social media or can undergo the necessary trimming and editing.

With a shutter speed of 60 seconds, the extreme black Ricoh is voted as one of the best 360 Degree Video Camera by the users. Ricoh tops in all cases of price, manufacturer, quality, and photo definitions. This VR Camera supports the direct transfer of media to the user’s smartphone without the usage of a computer. Ricoh Theta Digital Camera also can be used to function in live mode; where real-time views can be seen through the smartphone.

This latest version from Ricoh is an improved and more advanced option of cameras in the same line. With the support of the twin-lens optical folded system, spherical images of 14 megapixels are captured. This digital camera also has fair support from the image sensor which is (1/2.3 inch). This VR Digital camera can show the status of notification through LED light and the Wi-Fi speed is approximately 8 Mbps. This 360 VR Camera from Ricoh supports up to 25 minutes of video capture with built-in 8GB memory.

Recommended by hobby photographers, the LG product has a special feature of wide-angle lenses. With these lenses, the camera ensures that the 360 photo does not clutter into a sphere, but rather takes enough space while producing the capture details. This JG 360 Degree Camera supports the recording of 360-degree videos in 2K resolution. 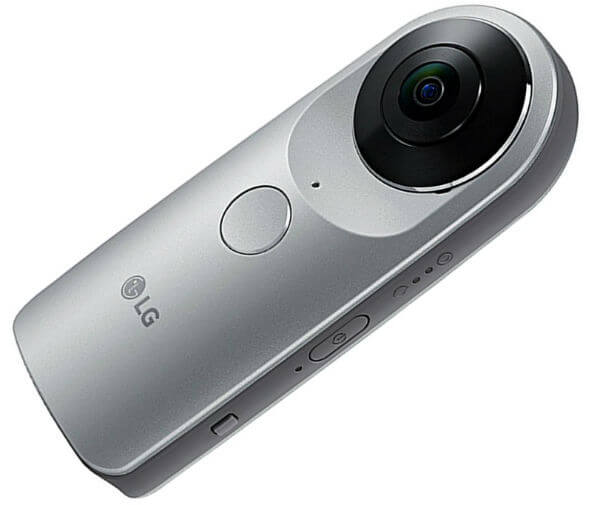 LG G5 has a battery life of 1200mAh and supported by 13MP image sensors. The photos are shown in high definition and video recording occurs at 5.1 Channel Surround Sound. The captured media can be directly shared with Google Street View as well as Youtube 360. However, the product cannot be activated without inserting an external memory card.

With a CES Innovation Award 2017 providing a halo for this product, the product has a fisheye lens. This means that it records the videos in a 210-degree first-person point of view. The product is compatible with iPhone 6, iPhone 6S, and iPhone 6S plus. Insta 360 Degree Camera also supports a real-time viewing from the user’s smartphone and the video capturing takes place in 3K resolution. 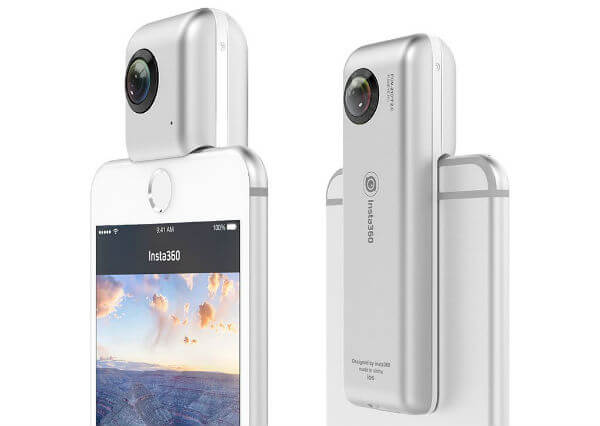 This is the first Apple MFi certified 360 Degree VR camera, also the first camera that supports Twitter and Periscope. Because of the lightweight option, many users recommend this for travelers. This lightweight VR 3D Camera also supports 360-degree live streaming. The Insta360 Nano camera is thus recommended in all sorts of habitats; be it sports, travel, or even at concerts.

With a battery charge of 1500 mAh, this 360 camera of TOPVISION has a dual spherical lens, that recommended and used for panoramic capturing. With an average video recording time of 2 hours, this VR Camera also provides a live view of the user’s smartphone. There are two modes for viewing the same. With the facility of VR already present along with the product, the media can be viewed in VR mode too. 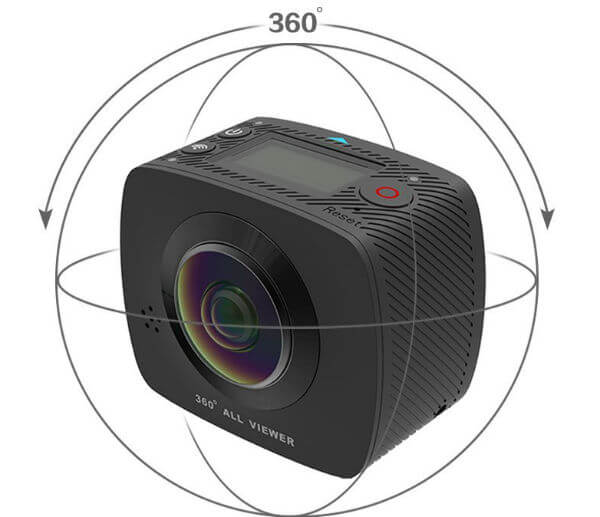 TOPVISION offers a free application is available for both Android and iOs devices for this 360 Degree VR Camere. For desktop use, the application can be download from the symax360 site. The VR Camera comes along with a one-year warranty, Wi-Fi support for direct sharing of media and supports up to 32GB SD Card.

The Kodak product is known for its water resilient and freezeproof characters. This 4K VR Camera can bear a temperature of -10ºC and one among those products that can be used in extreme climates. This 4K 360 Degree Camera supports a video capturing of 4K resolution. With an Ultra Wide lens, 4K Premier can capture photos and videos in 235 Degrees. 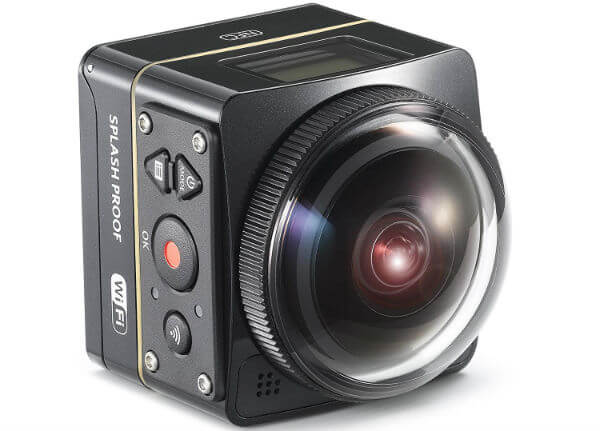 This VR Camera can be directly connected to the user’s smartphone via the PIXPRO app and to the desktop via dedicated software. The PIXPRO desktop editing software can take care of the required trimming and editing and the software is available for PC as well as Mac. This 4K virtual reality camera supports the sharing of media to social platforms and also provide a Stich Software which helps to merge to consecutive videos taken.

The silver black 360 Camera has a record battery life of 5000 mAh. With dual fisheye lenses, Insta360 is able to give the first-person point of view. The lenses extended to about 230 Degrees. This 360 Camera supports virtual panning via the user’s smartphone and also can transfer files via Wi-Fi networks. The product has a video capturing of 4K resolution.

Also, the support of image sensors of 2048 x 2048 resolution provides plenty of details in each capture. The Morjava Insta360 is functioned to provide real-time stitching. This 360 VR Camera is also able to go into a perfect transition from one image to another with no hassles, thus keeping a user-friendly experience. The camera is mainly used for high quality panoramic capturing.

When you go for next vacation, don’t miss anything from the mountain that you visit. 360 Degree Cameras can record you all angles at the same time. With the sudden surge from 180 to 360 degree, these 360 VR Videos gives us more exposure to the world we live and capturing everything our eye misses. Please make the video quality is one of the best by using a 4K 360-degree camera and pick the right one for you from the above list.

How to Auto-Delete Emails in Gmail and Reclaim Lost Space

How to Find Location Access History for Apps on Android: See Which Apps Got Your Location at What Time