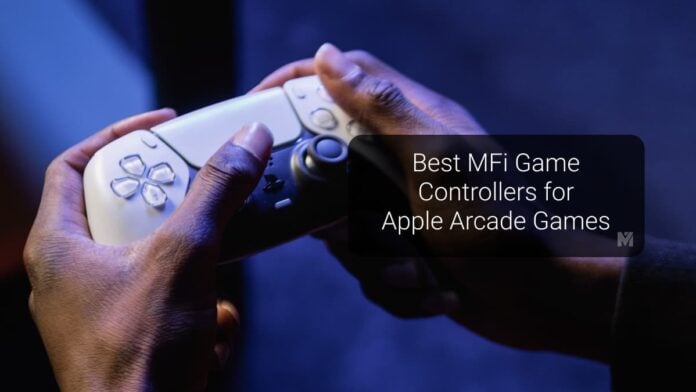 Here we list some of the best MFi Gamepads for Apple Arcade games to play using your iPhone, iPad, Mac, or Apple TV.

The GameSir T4 Pro’s asymmetric vibrating motor, which can be adjusted to one of five speeds, greatly improves the gaming experience. It offers a really lifelike and responsive gaming environment in real-time. You could assign extensive in-game macros to the customizable M1 to M4 buttons.

The translucent cover with a matte finish displays the internal components of the GamePad to the users. Also, the colorful LED backlighting makes the ABXY buttons and right joystick visible in the dark. The MFi game controller is compatible with iPhones and Android devices, as well as Apple’s Arcade games.

The Apple Arcade controller is equipped with a Type-C port, which charges quickly and has low latency. You will never have to worry about running out of juice again with this 600mAh high-capacity battery.

Related: 10 Best iPhone Games You Can Play with Game Controllers

Tactile D-Pad Buttons and directional arrows are Included on the SteelSeries Nimbus+ for instantaneous feedback. Joysticks with clickable L3 and R3 buttons provide players with additional input choices in a wide range of games.

Through authorized wireless connectivity, it provides access to all Apple devices, including iPhone, iPad, and Apple TV. An internal rechargeable battery provides 50+ hours of playtime on a single charge.

You can also get four months of free Apple Arcade subscription by purchasing the SteelSeries Nimbus+ gamepad. Also, it is recommended that you upgrade the controller by installing SteelSeries Engine to work with all your Apple devices.

Related: 10 Best Game Controllers for Android TV to Buy in 2022

The Rotor Riot mobile gamepad is compatible with all Apple devices that have a lightning port and runs on iOS. Play your favorite games on your iPod, iPhone, or iPad. The companion app called Ludu Mapp works with more than a thousand other apps. Play games like Fortnite, Call of Duty, and Madden 21 on your iPhone or iPad.

The wired connectivity means you will feel no lag in playing games on your iPhone. The pass-through charging feature lets you play for hours without worrying about your iPhone or iPad dying.

Play your favorite Apple Arcade game for up to 40 hours on the go with the Carbon Black Xbox Wireless Controller. If you already have an Xbox console, its controller must also be compatible with your iPhone or Apple TV for playing Apple Arcade games.

The 3.5mm headset connector allows you to use any headset that is compatible with your device. The USB-C port allows for simple plug-and-play connectivity to your gaming system or computer. On the back, you’ll find a slot for two AA batteries.

Use the app’s Share button to screen capture and share your gaming moments. Cross-platform play is possible across Xbox Series X or S, Xbox One, and Windows 10/11 devices via Xbox Wireless or Bluetooth.

Related: 20 Best Apple Arcade Games You Should Play on Your iPhone, iPad, and Apple TV

The PS5 DualSense controller has haptic vibrations that can mimic the sense of anything, including the recoil of various weapons. The L2 and R2 buttons on the DualSense are equipped with adjustable triggers to make you feel the weight of your actions. The Apple Arcade game controller has a long battery life thanks to a rechargeable battery that keeps it relatively light.

Connect a headset to the 3.5mm jack or use the built-in microphone to talk with friends online. The convenient mute button allows you to quickly turn voice recording on or off.

The Razer Kishi’s analog thumbstick is clickable for more precision and tactile feedback, while the controller’s performance buttons and d-pad allow precise control. It works with hundreds of Apple Arcade games on your iPhone.

The Razer Kishi controller has no latency because it connects to your iPhone’s lightning port instead of using Bluetooth. The controller has a USB Type C charging port, so you can use it to charge your phone or tablet in parallel as you play.

The ergonomic, bendable design makes it easy to get a good grip on, making it ideal for extended gaming sessions. Unlike other controllers, this one cannot pair with your iPad or Apple TV for playing Arcade games on bigger screen.

Related: These Apple Watch Games Are the Best Ways to Get Rid of Boredom

To play Apple Arcade games on your iPhone or Apple TV, pair the PXN 6603 MFi controller with your device through Bluetooth; this controller does not require an emulator or a jailbreak.

The iPhone gamepad’s high-quality rubberized unique finish on the surface provides a secure grip and can be stretched to fit phones between four and six inches in width. It works with nearly any game available on the App Store, including Fortnite, Minecraft, and Call of Duty, apart from the Apple Arcade games.

If you want to upgrade your cloud gaming experience, the GameSir G4 pro is highly compatible with all major cloud gaming systems, including Xbox Game Pass and Apple Arcade. Its magnetic ABXY buttons are swappable, making it possible to use a single controller for different games.

There is a six-axis gyroscope included in the G4 pro. Motion controls are supported, and the system is more responsive to the player’s movements represented in the game.

The MFi game controller is compatible with Cloud Games, Apple Arcade, and MiFi games. The gamepad also supports wired USB Type-C, Wireless Bluetooth, and 2.4 GHz WiFi. The retractable phone stand is for devices between 3.5 and 6 Inches.

Related: 15 Best MFi Gaming Controllers for iPhone and iPad in 2022

The BackBone One Controller is designed to provide the best iPhone gaming experience possible with its responsive analog triggers, tactile buttons, and clickable thumbstick. It has a Headphone jack, Passthrough charging, and offers fast gameplay on your iPhone. During gameplay, you can both charge your iPhone and plug in your headphone.

The included BackBone app organizes your games, suggests new ones, lets you chat with other players, records your screen so you can play it later, and works on any device. However, even without Backbone+, the Backbone can serve as a gaming controller for your Apple Arcade games. You also get one-month trial to Xbox Game Pass Ultimate, a $9.99 value.

The clickable L3, R3 buttons, and soft rubber grip make the GameSir X2 easier to hold on to for extended periods of play, and the micro switch buttons have a lifespan of 3 million clicks. The controller has no latency because it connects to your iPhone’s lightning port. The controller has a pass-through Lightning charging port, so you can charge your iPhone as you play.

As more and more games are coming to the Apple Arcade games, having an MFi controller is a must. You will be able to use your iPhone in your preferred spot, or you can gather your friends around the Apple TV and play together.

How to Use Car Crash Detection on iPhone or Apple Watch

How to Fix Unable to Check for Update Error on iPhone

How to Make Free Phone Call and Send Text Message from MAC?

How to Duplicate Someone Else’s Playlist on Spotify