HomeNews10 Best Game Controllers for Android TV to Buy in 2022

10 Best Game Controllers for Android TV to Buy in 2022 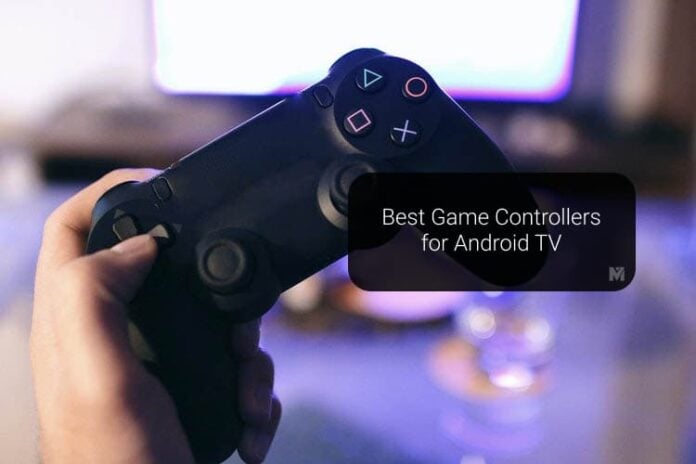 Playing games on the big screens does not always need PlayStation or Xbox consoles. If you have an Android TV in your living room, you can pair a Bluetooth game controller with it and play games on your TV. For that, you need to get compatible game controllers for your Android TV.

Here we list out the best Bluetooth game controllers for Android TV for big-screen gaming.

Designed by GameSir, This controller weighs just about a pound and is connected using Bluetooth. The wireless controller has an impressive battery capacity of 800 mAh that should last about 12 hours of gameplay. All buttons (A, B, X, and Y) can be interchanged or swapped according to your preference, making this controller highly customizable.

It also comes with a 6-axis Gyroscope that senses movement and adds to the immersion of the game. One AA battery is needed to operate this game controller for Android TV and is provided with the package. G4 Pro works on any android device running Android 8.0 and above and can be paired via a 2.4GHz USB dongle, Bluetooth, or by wire.

Related: How to Sideload Apps on Android TV Using Your Phone

EasySMX wired controller weighs around 0.6 pounds and has a 2m long cable for your comfort. The controller also features a turbo button as well as a home button. This Android TV game controller follows the design of the Xbox controller and sports some soft rubber grips to avoid sweating and slipping on the controller.

The dual vibration feedback function houses 2 separate motors inside the joystick to give feedback when needed. Overall all solid construction also ensures that no sound is made when the joystick is shaken. This controller is made of hard plastic meaning it can easily handle a fall or two.

Weighing only a measly 0.6 pounds, this controller made by IFYOO is both lightweight and functional. This controller’s ergonomic design conforms naturally to your hands and hence makes handling the joystick a breeze. This joystick also features a multi-mode that supports both Dinput and Xinput.

The vibration feedback and JD-Switch Function ensure maximum immersion while playing games. The joystick follows a button layout that closely resembles a PlayStation controller. Rubber grips on both sides of the controller provide a good grip on either end. This joystick comes with a backlight decorative board that comes in seven different colors.

This retro-looking joystick was designed and made by 8bitdo. Weighing slightly more than half a pound, this small controller fits perfectly in your hands. This controller is available in three different variations and three different colors as well.

Other than Android TV, the SN30 also works with Android phones, macOS, Windows, NES, and SNES. This controller comes equipped with a Lithium-ion battery that lasts an impressive 18 hours on a single charge. The charging time is only around 1 to 2 hours long so you don’t have to wait too long for your next game. This Android TV game controller works only on 2.4 GHz WiFi.

With a huge battery life of up to 20 hours, you can game all you like without the fear of your controller dying midway. Claimed to be ‘the most advanced controller from 8Bitdo’, they can operate even on AA batteries.

EasySMX wireless controller for Android TV has an Xbox-like design and weighs less than half a pound. It has a huge range of up to 10m or nearly 33 feet so that you can sit back and relax while you game without fear of losing the signal.

Insert two AA batteries and the controller is ready to run. This wireless game controller is compatible with almost all other OS including Windows, PS3, Android, Steam, and Nintendo Switch.

This is another wireless controller made by GameSir that weighs about 0.75 pounds. GameSir T3s wireless gaming controller for Android TV works perfectly on Android, Windows, Nintendo, and iOS. T3s have a built-in 600mAh battery that should provide up to 25 hours of nonstop gameplay.

This versatile game controller for your Android TV can easily swap the mode between Xinput & Dinput making sure your gaming never stops, no matter what. This hyper customizable controller lets you set your vibration intensity, range, turbo button, and turbo range all in one go. This wireless Android TV gaming controller can be converted into a wired joystick when you are out of battery.

Steelseries Stratus is perfect for any gamer, experienced or otherwise. The Stratus XL controller weighs about 0.6 pounds just like most controllers. This controller comes with 4 LED indicator lights that signify the connection status, so you won’t have to play the guessing game ever again.

Stratus XL gaming controller for Android TV comes with a considerably long battery life of 40+ hours and can be charged via AA batteries as well. Using their SteelSeries Engine 3 program you can even adjust the actuation point of the triggers, further improving your aim to pinpoint precision.

The wireless gaming controller for Android TV has a multi-mode meaning it can easily switch between Xinput and Dinput. ZD-V+ follows PlayStation architecture and closely resembles the PS controller. This controller also has a JD Switch function. Vibrational feedback and sharp responding controls make gaming on ZD-V+ an unforgettable experience. The smooth and streamlined design of this joystick feels comfy yet firm in your hand.

FANDRAGON A-038 gaming controller compatible with Android TV is wireless and so, it leads to a cordless and hassle-free gaming experience. It houses a high-precision D-pad that has a fused key system.

The wireless game controller has a range of up to 30 feet. Its ability to sleep and wake up makes this one of the best power-saving controllers available on the market today. Pressing the ‘home’ button for more than 7 seconds lets you change its mode from Xbox 360 to PC and PlayStation, further customizing your game playing ability.`

Adding a gaming controller to your Android TV lets you open a whole new world of living room gaming without getting a brand new PlayStation or Xbox. The above ones are those which are compatible with your Android TV without any additional setups.