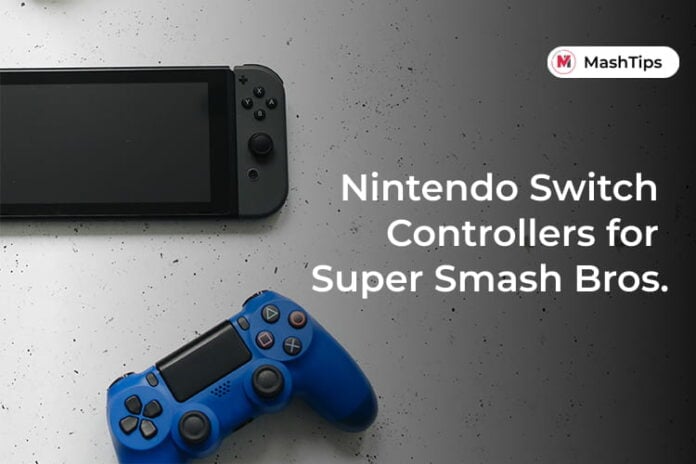 We know that the Joy-Cons may not be the best Super Smash Bros. Ultimate Nintendo Switch controller for docked mode. The buttons and sticks are simply too small and way too tactile and clicky to even consider that. The directional buttons don’t fare well either.

But what the Joy-Cons do have going for them is portability and handheld mode. The official Joy-Cons are pretty much the only way to play handheld mode on your Nintendo Switch. Granted that there are cheaper third party Joy-Cons. But they are not very good at all and don’t even come close.

One of the best things about Joy-Cons is that you can play Smash with a single Joy-Con. This is pretty good for the tabletop mode. When you are playing with a friend in tabletop mode on your Nintendo Switch, you can split apart the Joy-Cons and you both can play very well with each.

The official Joy-Con controller for Nintendo Switch comes with many features including HD Rumble, NFC, etc. Joy-Cons are way too good if you are outside or traveling at the moment. But, you might not always like the portable mode with the Joy-Cons to play Super Smash Bros. Ultimate on your Nintendo Switch.

When it comes to really intensive gaming, the Switch Pro controller is the best option you have. The shoulder buttons are in great places. The trigger buttons are clicky with shorter travel distances. Shielding and dodge rolls can be real quick with this.

The button layout might not be the best for Smash, but it’s still great for other Switch games. The D-Pad placement is not great for Super Smash Bros. Ultimate always.

Nintendo GameCube is a wired controller. But the wire is very long, so you shouldn’t really have any problem reaching any part of your room. The official 2018 version Nintendo GameCube controller needs a GameCube adapter to work with the Switch. And that is sold separately.

Mayflash GameCube Controller Adapter for Wii U, PC USB and Switch, 4 Port
Switch to “Wii U” or “PC” mode by using the switch located on the side; The driver is...

If you don’t like Nintendo’s own GameCube controller, HORI Battle Pad one of the best controllers for smash ultimate from a third-party vendor for Nintendo Switch. It is a very lightweight controller packed with everything you want.

Hori Battle Pad feels very cheap too. But the controller plugs into the Nintendo Switch via USB. So you don’t need to shell out extra money for an adapter. The Switch detects it as a Pro controller.

Unlike the Nintendo GameCube controller, this controller has all the buttons you need. It has buttons to start the game up, shut the game down, Home button, and Share/Screenshot button.

HORI Battle Pad has ZL, ZR, and L, and R buttons reversed. This is because the Z button on the GameCube controller is where the R button usually would be on a Pro controller or on the right Joy-Con. You can also flip these buttons without much effort.

The PDP Wired Fight Pad pro controller feels very nice in hand and exactly like an original GameCube controller. Unlike the HORI controller, the shoulder buttons are in the right places by default and not reversed.

The Switch detects this controller too as a Pro controller. And the trigger buttons are switches. So you can perform shields and dodge rolls very quickly. There is no turbo button or turbo functionality.

You can swap the classic C yellow stick with a bigger full-size thumbstick. You can use the controller on a PC too. As a wired controller for Super Smash Bors. Ultimate, you do not have to worry about latency and battery life.

There are no rechargeable battery options, which is a big downside to a wireless game controller for Nintendo Switch. You need to use AA batteries, which can last only up to 30-hours of playtime. You can instead use rechargeable AA batteries (which will cost you extra money).

Unlike the PDP wired GameCube controller, all the editions do have color-coded buttons for Smash. The trigger buttons are smaller and raised. But they have some travel distance and need a full press.

One great thing about this controller is that it has gyro motion controls. It also supports PC input, but it doesn’t have Xinput support. So you just need to enable Switch Pro controller support from Steam big picture mode for the controller to work correctly.

Related: The Best GameCube Emulator for Android In 2020

The Exlene Wireless Gamecube Controller is a great option to play Super Smash Bros. Ultimate. The controller works well with the Nintendo Switch, PC, and Mac. It features rumble, motion controls and comes with a rechargeable battery built-in.

The best controller for Smash Ultimate comes with most of the official Nintendo features including motion controls and Rumble. You get an exact design as the original GameCube controller.

One of the advantages of the smash ultimate GameCube controller over the original one is the wireless support. You can connect the controller over Bluetooth with most devices, and can recharge the battery using the USB-C cable.

Are you failing to demolish your arch-nemesis over and over again? The difference could just be down to the controller. Above is the list of the best available Nintendo switch controllers out there for Super Smash Bros. Ultimate. Any of these controllers should be good enough for Smash ultimate.

Fix Hibernate Option Missing in Windows 10 & 11 with This Trick

How to Automate Your Christmas Lights with Alexa This Year