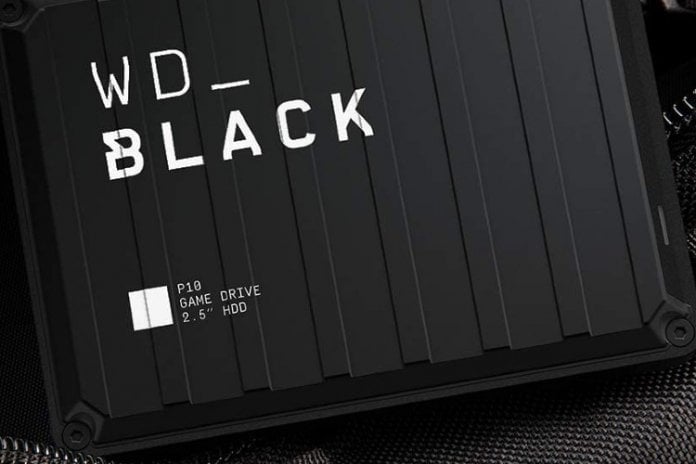 The battle between the Play station and the Xbox is never gonna seize anytime soon. So is their issues with limited storage. As more and more of our favorite games are getting updated each year in terms of graphics and storage spaces, its a fact that we need extra storage. Hence, we thought to deal with some of the best external hard drives for Xbox One and PS4, this time.

Our list consists of some of the best 1 and 2 TB external hard drives that can optimize the performance of the gaming consoles. They are assured to give the best immersive gaming experience possible.

The Western Digital gaming drive comes packed to meet the demands of your PS4. It is one of the most trusted portable hard drives you could ever couple up with your PS4. Coming in two variants, the 2TB and the 4TB is more than enough for your gaming needs. This portable hard drive has the capacity to store 100s of games within a small package. It is compatible with all PS4 and PS4 models and comes in a black and blue color scheme. The dimensions are also such that it could slide right into your pockets without much fuss.

The WD gaming Drive gets recognized quite quick when you connect it with the PS4. Its also rather fast in processing games that its own internal storage space. The hardware interface also has the new USB 3.0 tech this makes it more user-friendly. One thing to note that it can run up to 135 Mbps when transferring files from a standard PC with a 7200 rpm hard drive. Its compatible feature with the X Box remains a question as of now.

Portable Hard drive for PS4 and Xbox One

The Kesu Portable Hard Drive comes in 7 versions. They have models starting from 120GB to 1.5TB. What makes it in our list is the fact that you get mid-range storage hard drive with a fraction of what you pay for the high enders. Unlike other ones, this external hard drive works well with both the Xbox and the PS4. Apart from that, it is compatible with the Windows PC, Mac, and Linus OS.

It works by the plug and play mechanism. You need to connect it with your PS4 or the Xbox and there isn’t any need for any external software. It features the new USB 3.0 that gives phenomenal transfer rates. When it comes to gaming, this reduces the amount of time lag during game processing. Also, you can couple it with the USB 2.0 PCs as its reverse compatible. This makes copying games from your PCs kinda “quickish”.

Related: Best PS4 Games to Enjoy for All The Time

This portable hard drive you see here is a good way to expand your gaming delight. It can increase your PS4s gaming storage to 2 or 3 folds. This version of the WD external hard drive we got here is the 2TB version. There is also a 4TB version that costs around 120 bucks. It comes with the new USB 3.0 that makes gaming kinda smooth and crisp. All you need to do is to connect it with your PS4 and after some small initial setups, you’re done.

Coming to the design part, its a bit bigger than WD gaming drive, but yeah it is up to the mark. When it comes to gaming, portability doesn’t really play a great deal though. With the WD my passport gaming drive, you can store as many as 100 average sized games without any issues. Also, with the games loaded, you can connect and play with any PS4 modules without having them to reinstall. You might need some quick formatting while you use it for the first time, but that won’t be an issue.

The WD Black looks more rugged and stiff. The appearance gives you a sturdy look that is sure to turn some heads. The one we’ve got here is the 2TB version but there are 3 more versions available. You can choose from the 2, 3, 4 and 5TB versions according to your gaming needs. The portability factor is worth mentioning cause its the smallest in our list. It is like your personal gaming library while you are on the go.

This 2 TB external hard drive for PS4 has all it needs to give a smooth gaming experience. With the 2T version, you could keep around 70 to 90 average sized games without any storage issues popping up. With a transfer speed of 140 MBps, the Black P10 will push your console to new levels of performance, thereby enhancing the quality of your gaming. it comes with the USB 3.0 tech and is compatible with the PCs other than the PS4.

The WB My Passport you see here is built for the Xbox one and the Xbox 360. It offers quite a lot of extra storage for your Xbox consoles for immersive gaming. This version here is the 2TB one. But if you need more, then there are the 3TB and 4TB versions available. this external hard drive for Xbox comes with the new USB 3.0.

This enhances the transfer rates and gives a better ging performance from your console. The setup is quite simple. It takes just a couple of minutes to go through the on screen instructions to setup. The portability factor also makes you take it where ever you go. The build quality also makes it durable and sturdy. The minute tweaks from WD makes it the best gaming drive for your Xbox system.

WD 2TB My Passport X for Xbox One Portable...
Check on Amazon

The Maxone external hard drive you see here works fine with both the PS4 and the Xbox. It is a great solution for gamers who love to play with both consoles. The device is 0.4 inches thick and has a strong aluminum anti-scratch outer casing. This portable external hard drive for ps4 and Xbox features fast and stable gaming performance. It comes with the USB 3.0 that makes it faster than the basic 2.0 ports.

It works as a USB 2.0 backup drive allowing super fast transfer speeds up to 5Gb/s the version you see here is the 2TB one. You get a wide range of storage options for this model, from the 160GB to the 2TB. Apart from the PS4 and the Xbox, the Maxine 2Tb hard drive for pS4 and Xbox works well with the Windows PCs and Mac OS.

Related: How to Format External SSD for Mac Time Machine

The Seagate gaming drive comes in six variants ranging from 500GB to 8TB. The drive comes with 4 times (2TB) the initial capacity of the Xbox One. It is designed to work automatically with the Xbox consoles without any initial setups. With the Seagate gaming drive, you can add 100s of immersive games. You never even need to think of deleting the good old ones anymore.

It comes with a lush green design with the Xbox logo and is quite portable and slim. It might not be most compact but yes you could take it around for a spin without any issues. This Xbox one external hard drive of 2TB comes with the USB 3.0. This enhances the transfer rates and reduces in game delays to a great limit. With upcoming features such as DVR and backward compatibility coming to the Xbox One, the Game Drive is an attractive addition to any serious gamer.

The Fantom Drives GForce3 is an easy to set up external hard drive that is compatible with the PS4 and the Xbox One. It comes with the USB 3.0 that allows transfer rates that are 10 times what you get from the standard USB 2.0. The Fantom Gforce comes in 12 storage models, from the 500GB to the mammoth 16TB one. In our view, equipping a 2 or 4TB version is more than enough and does the job.

This external hard drive for ps4 and Xbox comes with a rigid metallic casing made of aluminum. It is great at dissipating excess heat that pops up during your intense gameplay. On one of the plastic ends, there is a series of vents for air to escape. On the lower portion has the USB 3.0 ports and a bright LED connection indicator. You also receive an external hard drive stand for vertical placement. Apart from the PS4 and Xbox, this device is compatible with the Windows PCs and the Mac OS.

The WD Black P10 in the recent year came up with the Xbox compatible model too. This hard drive is built to meet the Xbox One gamers out there. With this cool external hard drive for Xbox, you receive a free 2 month of membership of Xbox game pass ultimate. It lets you access 1000s of Xbox games and live gold. The portability factor is the key charm as its quite thin and tiny. It works like a mini gaming library for your Xbox console that you could carry with you.

The P10 comes with the USB 3.0 that offers a max 130MBps transfer rates. at optimum conditions, the drive can give you an average 110MBps transfer rates. It can in fact optimize and stabilize the console gaming performance to a great limit. The P10 for Xbox comes in 4 variants. You can opt from the 2, 3, 4 or 5TB versions as per your gaming desires. A small issue that you could feel is that it is a bit expensive compared to the other drives. You can see that you have to pay 50% more to get the standard 4TB version in this class.

The Toshiba Canvio Advance is the most budget oriented gaming drive you could get. It works well with the Xbox one and can store 100s of immersive games without compromising too much space. Apart from being an all out gaming drive, it suits the title of a backup drive or a personal storage space. The Canvio advance comes in 4 storage versions. It is a slim, portable hard drive that is a decent performer when it comes to transferring speeds. The portability factor is worth praise. You can slide it into your back pockets or small bag without others even noticing. It comes with a glossy plastic casing that is quite sturdy enough.

Apart from the Xbox one, it can work pretty well with the smartphones and the Macbooks. You need to format it to the FAT32, in order to couple it up with the Xbox series too. Coming the performance part, the Canvio Advance can give you up to 122MBps write speed. It can clock up to 140 MBps in reading speeds. This external hard drive for Xbox One comes with USB 3.1. Apart from the 2 TB version, there is the 1 TB and the 3 TB version for you to consider.

It’s really annoying when you have to get rid of your favorite games just to add new ones. The PS4 and Xbox still come with limited storage space and that’s why we went searching for some of the best external hard drives for you to make the best while you’re gaming. These hard drives we mentioned above comes with a compact and sleek design. They have phenomenal transfer rates thanks to the USB 3.0 tech. Also, most of them are not so expensive and don’t require maintenance of any of its kind.

Best Tips to Customize Chromebook And Make It Your Own

4 Essential Things you Should do Before Lose your Android Phone