Google Home is a perfect companion for your Home, despite the age of members in it. However, most of its users are adults who consider it as a gadget to save some time and stay away from a smartphone screen to get something done. Moreover, Kids find the piece of tech more interesting than parents or adults since they have a lot of time, of course.

Story reading time of children can be quite quiet and even sometimes boring for them. However, Google now comes up with this amazing feature on Google Home which makes the storytimes more “magical.” Literally, it could give life to the stories while your children read them aloud. Most of the compatible stories are from Disney. Your children can now read the same old Disney stories, but with a different way of music and interactive sound effects alongside.

The “Read with me” or the “Storytime” feature on Google Home works as a storytime assistant, which makes its progress along with the child who is reading along. When you command Googe Home to read a book alongside the side, it starts playing background music (based on the book/story).

The microphone will be stayed on, in order to listen to the child. The music will only get along with appropriate sound effects as the child reads the book forward. Do not worry, Google never records or saves the audio input during this time, and will take no input other than “Hey Google.” Here is how to use the “read with me” feature on Google Home.

If you are wondered which of the books are compatible with the “read along,” following is a complete list the same Google confirmed so far. Most of them are from Disney and they are The Three Little Pigs, Alice in Wonderland, Cinderella, Coco, JJack-JackAttack, Mickey Mouse and his Spaceship, Moana, Toy Story 3, Peter Pan, Ara the Star Engineer, Aladdin, Lion King, Mulan, Frozen, Mickey’s Christmas Carol, and Mickey Mouse Goes Christmas Shopping. Google will soon add new books in this list.

Google Home will also bring some background music and sound effects with most of the design books you select to “read along with”.

As your children grow, there is a necessity in concentrating on their language skills. Even though there are tons of resources available on the internet, nothing could help them as much as a personal mentor does, but Google Home can. As Google turned it into a complete personal assistant, anyone can get any help, from academics to the dish recipes. Children can play with words and vocabulary on Google Home. Here are some features and commands for Kids to play with words.

When your kids are writing some homework or trying to learn themselves in English, you can train them to get used to Google Home to get word spellings. Thus, they will no more need to ask someone for the word spellings. Google can spell check for their writings and even learn spelling bee words.

Get Word Meaning from Google Home

Google Home can be your personal dictionary for the whole academics period and in your daily life. When a word seems to be confusing your kid, they can just ask Google Home to get the meaning of the word. The command goes as “Hey Google, what does [word] mean?”

Google Home as an inbuilt translate based on the Google Translate platform, that could convert any sentence from and to any language. The new interpreter feature can continuously translate the sentences from any supported languages. This can help children with their foreign language studies.

Command, “Hey Google, translate from [langauge] to [language].” When the Google Home device beeps you can start speaking in the known language and the Google Home will instantly translate it into the other language.

Ask Google “Tell Me a Story”

Google Home has an inbuilt audiobook playing feature, that plays books from the PlayBook repository. However, the default storytelling mode is reserved for the kids and you will get to listen to the Disney stories and other fables. Google starts some fairytales or fables when you command “Hey Google, tell me a story.” If your children want to listen to the Disney bedtime stories, ask “Hey Google, tell me a (Disney) bedtime story.” Instead, you can also specify the book name to be narrated.

Google Home can be a great assistant with homework and study time. Plenty of tools and features on the device can enlighten your kids with new information, help with mathematics and general knowledge. Following are some of the commands for kids to help them with the learning process.

Children can set alarms based on their favorite animation or movie characters. You can simply ask for an alarm, followed by the character name. Here is an example,

You can get fun games for kids online, through tablets or PCs. But, they are not really like playing in the real world. So, if you want your children to play physically without sitting on a chair by staring at the screen, Google Home is there for you. Since there is no screen provided for the basic Home devices, your children can be anywhere near the device to play fun games for kids with Google Home.

Following is a list of the most interesting games and their commands for kids on Google Home.

Ding Dong Coconut is a tricky brain game that can help you train your memory with some crazy games. The game pattern includes sounds and words, which you should remember to win.

The Riddle Room is Google’s version of the escape room game. It needs you to go through adventures and puzzles to solve, in order to escape from the Riddle room.

Get your friends and dance along with the Music played on Google Home. Freeze when it says “freeze.” Whoever moves will be eliminated.

The same old musical chair game, but the Google Home as the host. It can play some interesting music for any duration based on the number of players involved. 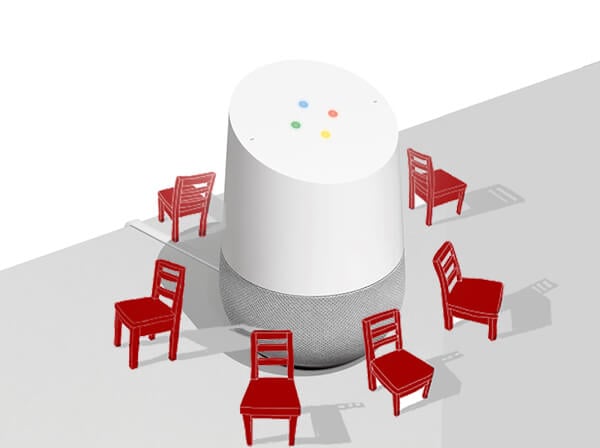 Google makes a genie appear on your Google Home and it will start shooting tricky problems. You need to choose the best solution from the sacks on Genie’s hand.

It is a family game that everyone would like. Google randomly asks every player a certain set of questions and the winner will be announced at the end. It can be ones of the best educational games for kids on Google Home.

If your taste is adventurous games, you can go with Jungle Adventure. The decision-driven game takes you through an immersive experience of wild jungle and streams to get to a temple.

Let your children learn more about space, galaxies, and constellations through space trivia.

More Games and Commands for Kids

Other than the above-listed ones, there are plenty of other fun games for kids available with Google Home. Here are the games and commands for Kids to play more fun games on Google Home.

Google Home is the perfect device for your Kids if you want them to stay away from computer displays for a while and interact with educational/funny things. Google Home has packed it all for you.
Facebook
Twitter
Pinterest
WhatsApp
Telegram
Previous articleHow to Connect AirPods with iPhone
Next articleRecover Deleted Files/Photos in Windows 10 with EaseUS

How to Turn Lights on at Sunset with Google Home

Automating tasks on Google Home was never been this easier. Even though Google Home or Nest speakers have options to set routines that can...
Read more
Google

How to Use Google Home Family Bell for Dinner Time & More!

Pretty much everyone is getting used to working from home and learning from home. There is no more fun as we used to get...
Read more
SmartHome

Google Home or Nest speakers are a great addition to your smart home. But, they only allowed music streaming from Spotify, YouTube Music, and...
Read more

How to Get YouTube Music on Google Home for Free?

How to Undo Sent Email with in Gmail?