A desktop environment is not something most people in the world know of or care about even if they’re using computers every day. That’s because most users use either Windows or Mac both of which have pretty a single desktop environment or shell developed by their respective companies with no other options. On Linux though, you do have plenty of options to choose from, even in the case of your desktop environment. This is why there is a common question that many Linux new-comers face.

What is a Desktop Environment?

Wikipedia describes a desktop environment as, “an implementation of the desktop metaphor made of a bundle of programs running on top of a computer operating system, which share a common graphical user interface (GUI), sometimes described as a graphical shell.” It is a little complicated to understand. In layman’s terms, a desktop environment is simply the GUI that allows interacting with the OS and different parts of it such as apps.

Related: 15 Best Lightweight OS for Old Laptop and Netbook in 2019

It would be difficult and near impossible to name a perfect desktop environment since everybody has different needs and uses. Everybody even has different workflows and thus uses their desktops differently. For some, a desktop that gives the freedom to customize it any way they prefer would be the best but for some, it may be too complicated. While we cannot name an absolute best, the perfect Linux desktop environment there ever was and is, we can tell you about the best ones around.

A personal favorite of mine, KDE Plasma is easily the most customizable desktop environment on Linux, at least amongst those I’ve tried. Most other desktop environments require certain tweaking tools so that a user can tweak a few things here and there. On the other hand, KDE Plasma has all the tools baked right in. You can download widgets, wallpapers, themes, icons, etc. all from the KDE Plasma interface. You don’t even have to go looking around the internet in your browser. 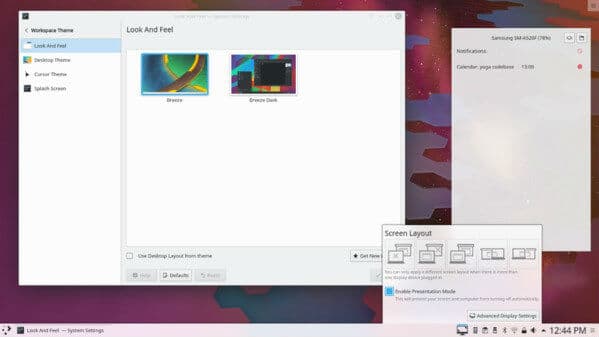 It’s less a desktop environment than it is just a collection of different modules and apps. The KDE Plasma desktop itself is a bunch of these modules combined together to create a desktop. Not only does this make KDE Plasma the most customizable desktop but also the most flexible.

The Plasma desktop environment contains a good collection of built-in apps. Moreover, it also works nicely with apps that are not built using the KDE Development Platform. All of that flexibility also comes at a price though. It uses a lot of transparency and blur effects. These are quite pleasing to the eyes. However, they’re not so easy on the hardware and won’t work nicely with older PCs.

While KDE Plasma is the most customizable and flexible, you’re going to be spending quite some time trying to understand how things work if you’ve never used something like it before. Certain simple features such as the ability to right-click an image and set it as wallpaper are also missing. Discover, the default app manager on KDE Plasma is pretty inconsistent, freezes often, and also refuses to work right at times. Things like these make the desktop feel like a work in progress rather than a polished product which it actually is.

This is another favorite of mine, but not as much as KDE Plasma. GNOME is the default desktop environment of Ubuntu, since Ubuntu 17.10. It is also my desktop environment of choice when I want a change from KDE. GNOME is not nearly as customizable as KDE Plasma, nothing really is. But when it comes to customizability, GNOME can hold its own against KDE. GNOME is one of the most popular desktops around in the Linux world, might even be the most popular. 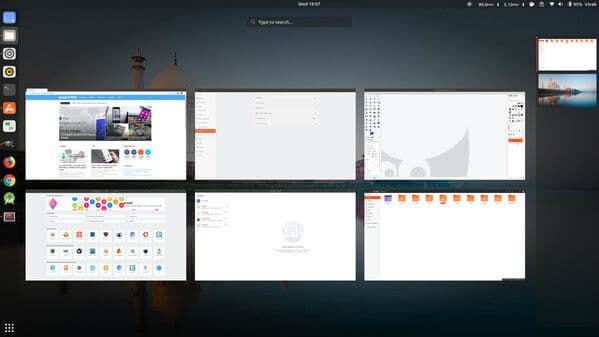 Customization does require installing a GNOME Tweak Tool and a bunch of other things called extensions. Extensions are what make GNOME as great, as usable, as customizable as it is. Without them, I can’t imagine using GNOME at all. With the help of these extensions, you can make GNOME look and work like Windows, like Unity desktop from earlier versions of Ubuntu, or a like macOS, to an extent.

There are a few quirks here as well. For one, GNOME is not meant for lower end or older PCs at all. It is counted amongst the most polished Linux desktops. And it is also counted amongst those that require decent hardware to run smoothly. Further, even with the best hardware, animations on GNOME are always a bit jittery.

Since we are talking about GNOME, let’s also discuss MATE. When GNOME 3 came out, a lot of GNOME fans didn’t like the radical change from GNOME 2. This is Linux though and almost everything is open source. MATE is a fork of the GNOME 2 desktop, based on the now unmaintained GNOME 2 code. The target audience for MATE is clearly those who want to stick with GNOME 2 and still have a modern desktop. 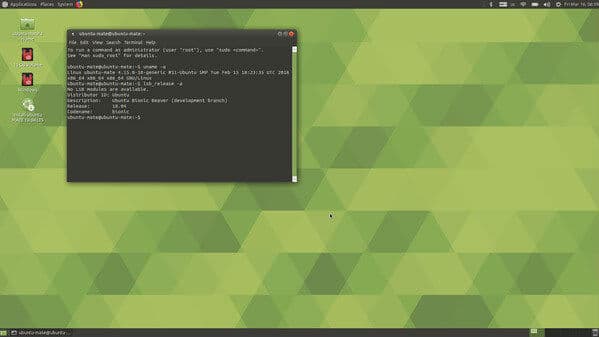 For those who are new though, MATE is still a pretty amazing choice. It looks modern and also makes use of modern technologies and features. The code-base it is built upon maybe old but that also means it has stood the test of time. It has a dual panel system like GNOME 2 making use of menus, applets, indicators, buttons etc. which can be arranged however the user wants.

The desktop comes with a good selection of pre-built apps which are also mostly forks of GNOME 2 apps. The best part about this modern desktop experience is that it isn’t as resource hungry. MATE can run fluidly on any older, lower-end PCs that are having trouble running anything else.

Like MATE is a fork of GNOME 2, Cinnamon is a fork of GNOME 3. You’re probably starting to get just how popular and widely used GNOME is. Cinnamon is the default desktop environment of Linux Mint and was specifically developed for this. It is known mostly for its similarity to the Windows user interface, although it looks more like a customized Windows XP or 7 than Windows 10. 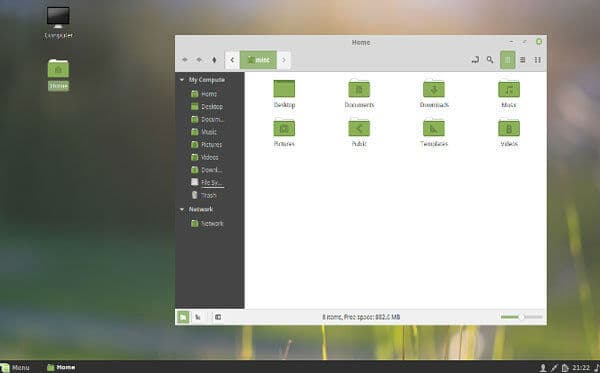 Cinnamon features a single panel at the bottom like Windows, but it can be placed differently if the user chooses to. This panel has the main menu, application launchers, a list of open windows and the system tray. Cinnamon is one of the easiest desktop environments to use for someone coming from Windows. That is its biggest strength.

It also contains other panels, supports themes, applets, and extensions. In other words, it is also quite customizable. However, don’t expect as many options in terms of extensions here as you would for GNOME.

This is another desktop environment based on GNOME. Budgie was created for Solus Linux and is, therefore, the default desktop of the said Linux distribution. The simplicity of the intuitive and elegant interface made Budgie quite popular amongst users. Thus, it has now been made available for many SUSE and Arch-based Linux distributions as well as the Debian-based Ubuntu. Ubuntu even has an official budgie flavor which ships with Budgie as the default desktop instead of GNOME. 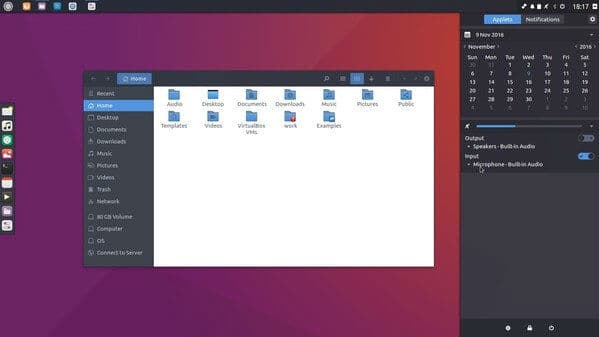 Budgie even uses the same settings app as GNOME. All Budgie related settings can be configured right on the desktop in Budgie settings which is but a panel instead of a separate app. Users can tweak the looks and colors of the desktop from these settings. Budgie does not have support for widgets, extensions, etc. It’s pre-configured in a way that most users may prefer.

The lack of customization options does make Budgie quite resource friendly. While isn’t the most light-weight desktop environment, it is also not the most resource hungry.

Pantheon was developed to be the default desktop environment of Elementary OS, another Linux distribution that uses Ubuntu as its base. This means Pantheon desktop can be easily installed on Ubuntu. However, you might not want to do that if you already have either Unity or the GNOME desktop because it kind of messes them up slightly. 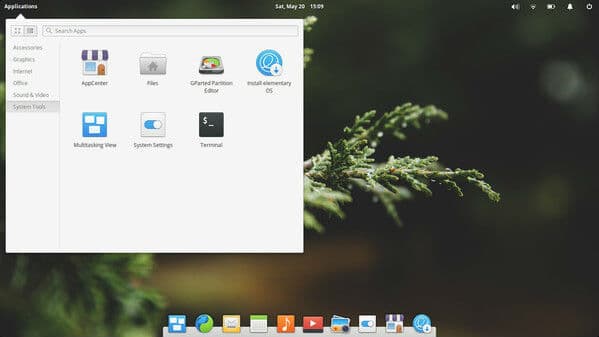 Just a quick look at the desktop can tell you it has been made by enthusiasts. I’ve always wanted the option to make the Windows taskbar transparent, or the top bar in GNOME transparent. Technically that is possible on both of those desktops but on Pantheon, that option is available right out of the box. The bottom edge of the screen has a macOS style dock which is again, something enthusiasts would want.

It’s far from the customizability of KDE or GNOME though and even some other light-weight desktops. Elementary OS is designed to be simple and to look great and this carries on to the Pantheon desktop as well. If you need something that works right away and doesn’t have much room to cause confusions, Pantheon is perfect.

If you’re looking for something really light-weight, XFCE was specifically designed to be that. With an average memory usage of just around 100-200 megabytes, XFCE is one of the most light-weight and yet feature rich desktops you can get. It’s also highly customizable and works similarly as KDE Plasma, except the transparencies and blur effects. 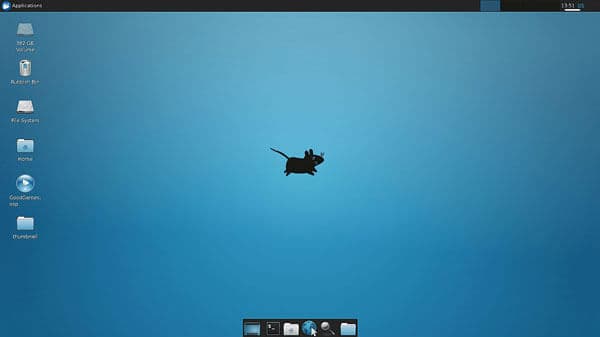 You can add panels, add items to panels, add launchers, switch menus, change the dash style interface, add a customized dock, change themes, icons, etc. And all of that doesn’t even require using an additional tweak tool. It’s all baked in.

There are, of course, a few compromises you’ll be making to get this modern desktop environment running with as little memory usage as it does. The pre-installed list of applications is a little less which can be a good or bad thing depending on your requirements. While the desktop looks visually modern and appealing, all elements are mostly opaque.

How to Customize Google Home for Indian Users?