How to Check Battery Health On Android

Smartphone battery health has always been an issue. However, since the whole iPhone slowdown fiasco, it has been highlighted more than ever. Android smartphones don’t have similar slow-downs, not due to the battery at least. However, it is still a good idea to check battery health on Android devices.

For one, it tells you what the battery capacity used to be and what it is at the moment. Thus, it gives you a better idea of what to expect.

Can You Check Battery Health On Android

The problem is that unlike iPhones, Android battery stats don’t show the battery health. Now, something of that sort may appear in the final build of Android 11, or 12 or some time in the future. But as of Android 10, in 2020, Android does not show battery health in Settings. You can see other battery stats and related features in Settings > Battery. You can also tap on the three-dot menu button to see Battery usage.

While you can’t quite check battery health, you can see which apps are affecting battery life the most.

Like a lot of other things on Android, however, if Google doesn’t do it, third-party apps can. But there’s also another way through dialer codes. Although, this does not work on many devices and is therefore not a consistent method.

Also read: How to Get Google Search Bar Back on Android Screen?

Android has a lot of hidden dialer codes. These codes are meant for developers or service staff. These provide easy access to information that the end-user might not need. On some devices, you can also check battery health with a dialer code.

Unfortunately, on our Pixel 3a, there was no battery information available. But your mileage may vary depending upon the make and build of your device.

Also read: How to Enable Split Screen & Multitasking on Android 10

There are many apps on the Play Store that can provide you the desired information. But most of them are either ridden with ads or seem shady. AccuBattery is one of the most highly-rated apps for gaining additional battery information. If you have a rooted Android device, you may find a better app that provides even more info. For the average non-rooted Android user though AccuBattery provides more than enough information.

It’s worth noting that the app does a lot more than just gauging your device’s battery health. However, that’s all we’ll be focusing on here. 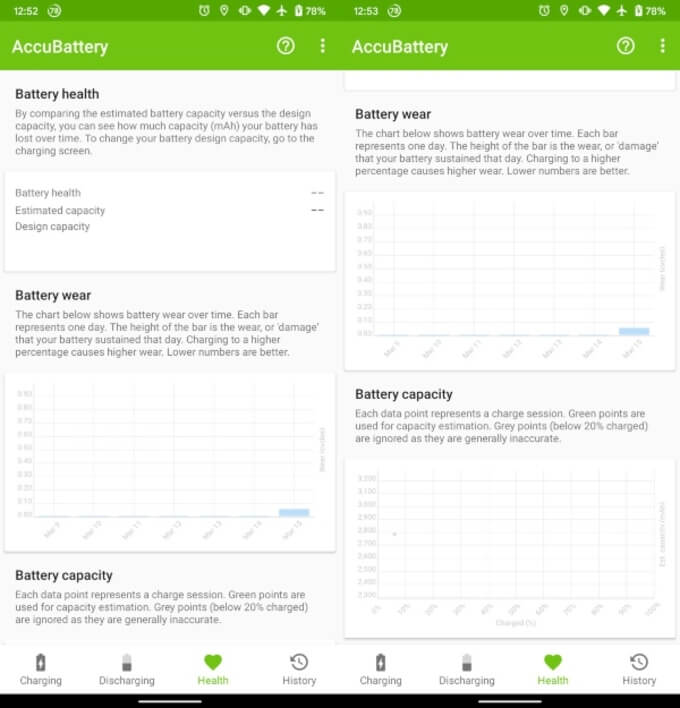 Here, you can find information about the Battery health of your Android, current capacity, and original capacity. There are also charts showing battery wear.

As you’ll notice, at this point this screen is just full of blanks. That’s because the app has no information to provide yet. Android does not provide historical information about your app or battery usage to other apps. Therefore, AccuBattery will have to start from scratch. Over time the app will track your battery wear and battery capacity of your Android. Similarly, the other numbers will also be populated over time.

Before smartphones, batteries in mobile phones weren’t really a big deal. Phones used to last several days on a single charge. But when smartphones happened, battery-life took a real hit. Early smartphones couldn’t even get through a day without needing a top-up charge. Most smartphones still need to be charged once a day. This makes the battery health deteriorate faster. Keeping tabs on the battery health is never a bad idea.

How to Fix Nintendo Switch Joy-Con Connection Problem (with Pictures)

How to Hide and Lock Photos in Google Photos