How to Customize AirPods Double-Tap Controls?

Apple AirPods is undoubtedly one of the best wireless headphones available so far. Among its top-rated features, the double-tap controls on AirPods turned into the most favorite of most of the users. Apart from the built-in functionalities to the AirPods Double-tap controls, there is a lot you could do extra with it.

In this article, we will guide you through the steps to customize the AirPods double-tap controls using your iPhone.

How to Change AirPods Double-Tap Controls?

If you want to change the double-tap options on your Apple AirPods, follow the steps. 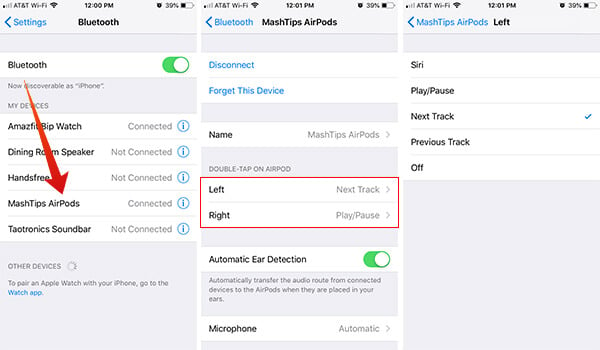 Generally, you will be able to set the following actions for the double-tap on AirPods: Siri, Play/Pause, Next Track, and Previous Track. You can also opt for turning off the double-tap feature in order to avoid false touches. The Siri trigger feature will be shown only if you are using the second generation AirPods since it carries an in-built Siri feature.

There are many wireless earbuds available for both Apple and Android devices. But none of them are anywhere near the Apple AirPods’ compatibility with iPhone. Apple made it possible by using the W2 Chipset that drives the entire wireless Bluetooth system including the double tap controls.

The company announced all of its features to work well with Apple iPhone and iPad devices. Speaking of the truth, the superior audio quality and connectivity features can avail by connecting to an iPhone only. However, you can now pair Apple AirPods with Android smartphones and makes use of its key features to an extent. The AirPods Double-tap controls are also available in such a way. 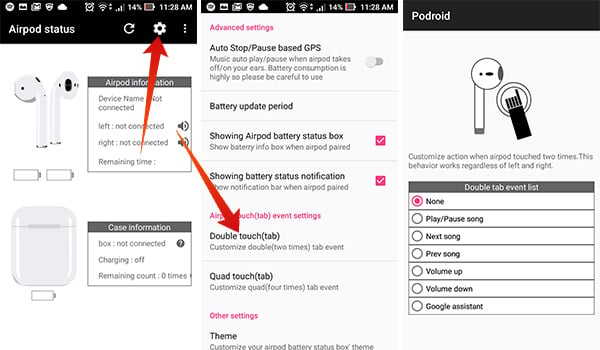 The double-tap on Android works the same, despite which earpiece you are tapping. However, the quad touch can help you add an extra action for tap gesture. You can tap four times on a side or twice on each side to trigger the features on AirPods when used with Android. Apart from the Podroid app, you can make use of tons of other Android apps available to do the same including Assistant Trigger, PodTap, etc.

Currently, there are Windows 10 features or supported apps available to control the double-tap gesture when paired with a PC. Therefore, the double tap gestures become useless when you want to listen to music from your PC.

Customizing the double-tap feature change the way you use your AirPods to listen to music. You do not have to pick your iPhone up from your pocket every time when you have this turned on.

Wake Your Android Phone Without Touching the Screen Like Google Pixel

How to Get Battery Percentage on iPhone Status Bar