How to Get iPhone X Animoji on Android Phone and Tablet?

Well, talking about the new iPhone X animoji feature, Apple developed this fun and super cool feature. With iPhone X, you can create short clips or GIFs of your own emoticon and send it to friend and family. At first, it might feel a bit clumsy but believe me, it’s awesome. Now coming to the reality, well affording an iPhone X is by far, more than expensive. The question arises on how to get the iPhone X Animoji on Android? The quest for a good alternative for the animoji leads us to certain apps in the play store. Among them, we found an app that can do almost a similar job for Android users to make iPhone Animoji on Android platform.

Editors Note: The iPhone X Animoji uses Apple’s facial recognition technology, which captures facial expression with extreme accuracy and creates a 3D imagery. You can’t get the same accuracy or feel with this Android Animoji App, but so far this is the “best in town” for Android Animoji fans.

After testing dozens of Animoji Android apps, the Android app called Animoji for phone X was found to be an alternative for the iPhone X’s Animoji feature. This Android Emoji app is developed by the Animoji Team and could be downloaded from the PlayStore for free. 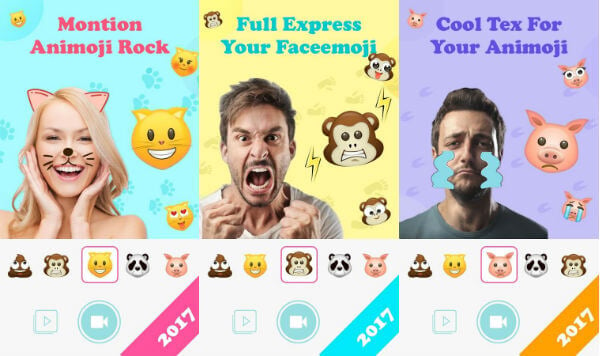 To proceed with Animojis on Android, download this free app and install on the Android. When you open the App the home screen bring you a selection of over a dozen live avatars. This Android Animoji app is using the Face ID hardware and also the face-scanning feature of your Android Phone X to create a custom version of 3D, based on the facial expressions that detect by the App. The home screen features the camera access, and the choice of Emoji, which helps you to convert your face to 3D Animoji on Android.

Related: How to Convert Selfies to WhatsApp Stickers& GIFs?

Swiping to the left gives access to other random and popular emojis. All that you need to do now is to just hold the phone straight to your face and tap on the required emoji. The iPhone X emoji (live) could be made by tapping the video capture button either with no emoji or with any required emoji from the home screen of the Animoji App.

Please hold the phone camera straight to your face, and the app records a short 10 sec video with your face to convert to 3D Animated emoji, that almost looks like iPhone Animoji (we know it’s not perfect like your iPhone Animoji). You can stop in the middle of recording by taping on the video button if you want to get short video less than 10 seconds. Based on our test, the app can detect one or two faces on the camera and apply the same mask to both faces.

Convert Video to Animoji on Android

While recording the video with the Android front camera, the app will display the selected Animoji on the screen. If you don’t like the low-resolution front camera, you can switch the video to the back camera for more clear video. 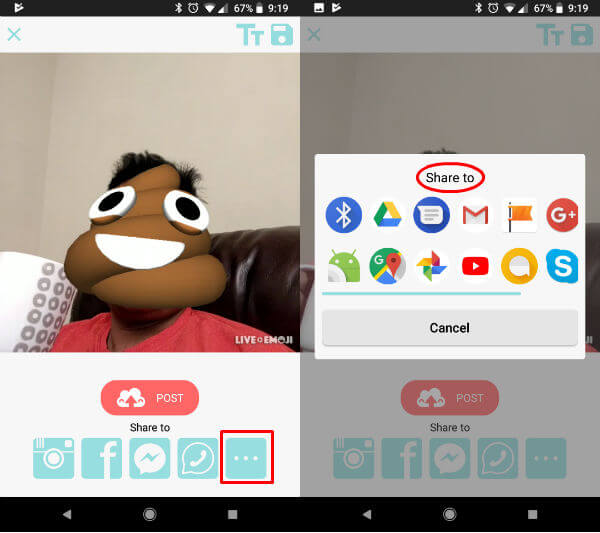 Within no time, the Animoji app will process a live 3D animated emoji according to the user preferred facemask. The share option that pops up soon after the video gets saved in .mp4 format. This custom made iPhone X type Emoji could be shared with all social media directly from this screen.

Use Animoji on Android for WhatsApp

Tapping on WhatsApp icon from the share option directly takes you to its basic share screen from where you can send these processed videos either to your family, friends or to anyone on your list. 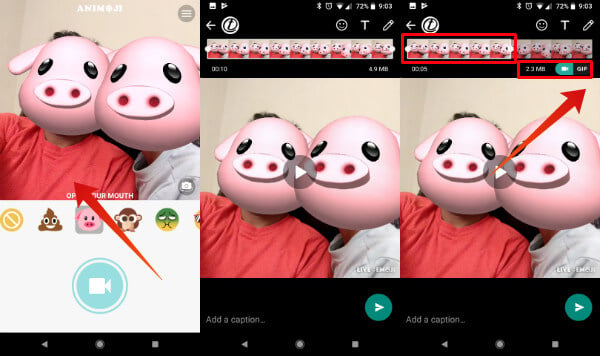 WhatsApp also gives the feature to convert the .mp4 video into GIF. This can be done by just selecting the required part of the video. You have an option to select the beginning and end part of the video to trim and the GIF button will automatically pop-up when you select the video to a short length of time. Usually, the trimming process is quick and the GIF button will pop up for the videos for a length of 5 seconds or less. The GIF format is comparatively small in size to the .mp4 format and yes it’s more convenient and user-friendly.

Get Animoji on Android for Snapchat

Now you have iPhone X Animoji on your Android Photo gallery in both .mp4 or GIF format. You can repeat the process of making Animated Emoji like iPhone for multiple Emojis. 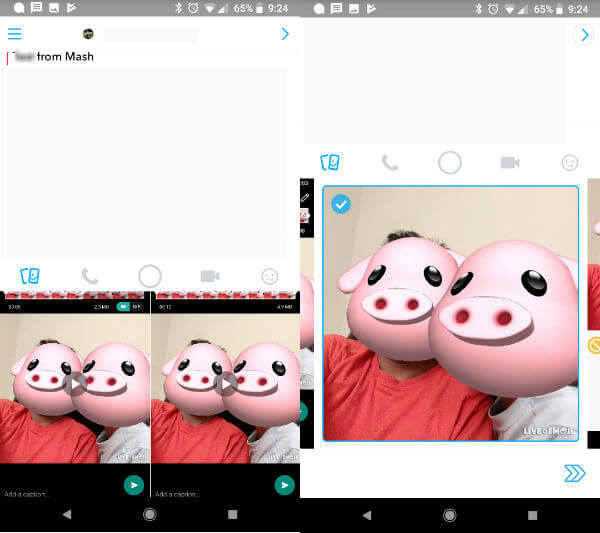 The collection of these Animojis Android you created could be shared through Snapchat. For Snapchat Animoji, all you need to do is pick up the converted android Animoji from the gallery or saved folder and just tap the share button with whom you want to share. If you have a good collection of iPhone Animoji on Android, you can use for multiple users for fun.

Another cool alternative which we found was the emoji maker. This free Emoji App from PlayStore was by far a pleasant one, letting you create our own customized emoji the way you need. The emoji maker takes us to the home screen filled with some popular emojis and an ‘add new button’. Tapping on the ‘add new’ button leads to the next screen stuffed with dozens of unbuilt emojis. Just swipe to the left that gives access to tons of new scrappy emojis. These Emojis could be made into a brand new avatar as you wish. The best results could be obtained by pairing this iPhone Emoji app with Kika keyboard Android App. The keyboard lets you send these new custom made emojis with your friends, family with Kika as the default keyboard. 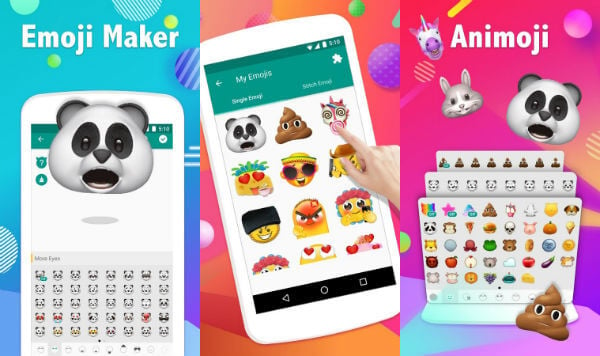 The developers provided a short startup tutorial about this Android Emoji app to help you make some cool and funky emojis. And yes, the app could be taken as an alternative if you can compromise a bit. However, personal Emoji App doesn’t let you create Animojis the way the iPhone does. That’s right, this app doesn’t recognize your facial expression to process 3D emojis. The biggest flaw which we came across is the presence of ads (oh! this app has a real issue with the ads). Literally, numerous ads pop up each time we touch the app. The emoji maker gives you a good emoji making experience if you can compromise the Ads on the app.

The iPhone animoji uses this image as its base image to process out fun and cute emojis based on specific expressions. This Animoji app on Android could be only considered as distant only alternatives for generating iPhone X Emoji on Android. They cannot be taken as a replacement of iPhone’s animoji feature and not so accurate as compared with the real iPhone X Animoji feature but as a whole, these apps really do a decent job, if you could compromise on certain aspects. We are sure you will certainly have a pleasing time with this iPhone Animoji app. It wouldn’t be quite long for Android OS to catch up with these modernist features of the iPhone.

Protect your iPhone and iPad with Strong Alphanumeric Passcode Lock

A Complete Guide for Parental Controls on Fire TV or Firestick