How to Identify Fake Apps in Google Play Store?

Google Play Store is home to millions of Android apps. At the same time, it is also home to fake apps looking to steal your data. There are strict guidelines in place, and Google has deployed many methods to curb this practice. Google Play Protect and the Granular Permissions feature in Android are just two of them. Even though, fake Android apps or Apps with malware and adware are unavoidable completely. Some way or the other, these app owners manage to find their way into Play Store and worse, stay there.

The question is, how do you identify fake apps from genuine ones in the Google Play Store? What can you do about them to make sure that neither you nor any other Android user installs such apps on their devices? Let’s share a few tips to identify these fake Android apps from Google Play Store and stay away.

The first step involved in downloading and installing an app is to search for the name of the app. While in most cases there would be only one version of the app. If someone is trying to mimic and fake a popular app, they would definitely try to copy the name and icon of the app.

For example, the original Asphalt game developed by Gameloft, but a search on Play Store shows copycats. 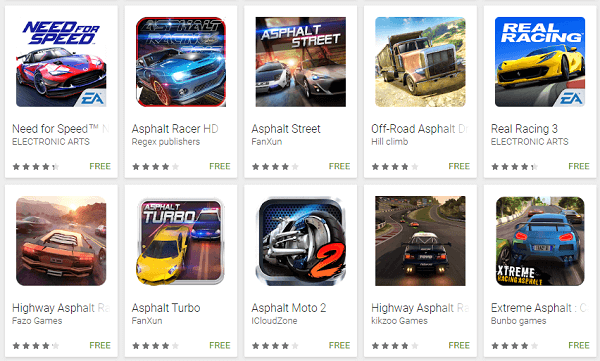 So, when you search for a particular app in the Google Play Store, and you are getting many results with the same app name or icon, chances are most of them are fakes. You should check at least few of these factors mentioned below that may raise some red flags:

If you are not able to identify or differentiate between the real and fake developer, just click on the name of the developer to see whether they have published any other apps on Google Play Store or they have solid positive ratings from the users. If any of these criteria is not satisfied, then the app might probably be a fake one.

Sometimes, almost everything else about the app’s listing in the Google Play Store seems familiar or indistinguishable from the other apps. However, it is always good to read the app’s description written by the developer and the screenshots of the app.

Genuine developers provide high-quality screenshots of their app’s UI along with a description that explains the features and highlights of the app. If you do not find such screenshots or app descriptions for an app with a similar name to that of a popular app, then you might be looking at a fake app here.

Since there are millions of people who use Android phones, there is a good chance that many people have already used the app that you were about to download. Most of these users may have shared their reviews and rated the app too. Always go and read a couple of reviews before you jump to the installation process. Just for a sample, see a bunch of reviews from a Photo Gallery app from Google Play Store that may alert you. 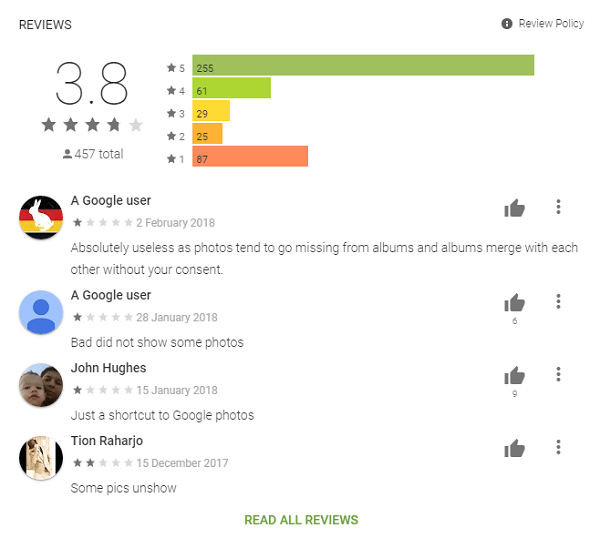 While it is true that some developers buy fake reviews, you can sort the reviews by “most helpful”, “most recent” or even based on the app versions. This is a good practice to learn what other users have said about the app and to know whether it’s a genuine app or a fake one.

Most fake apps aim to get as many downloads as possible so that they can earn money by either displaying a ton of adware or Spamware to the users or collect users’ data.

So, before you install any app, look closely at the list of app permissions mentioned on the description page. If anything seems odd, like a gallery app requesting a contact’s details, song app requesting for camera permission, they are more likely fake Android apps.

Also read: How to Change Google Assistant Voice on Android

Actions You Can Take Against Fake Android Apps

So, you found an app in the Google Play Store which you think is fake. Now what? There is actually a simple but efficient way to tell Google that there is a fake or malicious app listed in the Play Store. All you have to do is to open the app page and scroll down to the description section.

Under the heading Report, you will find an option to “Flag it as inappropriate.” This will take you to a page where you will be asked to choose a reason for reporting the app. Select the reason as Copycat or impersonation among other reasons. 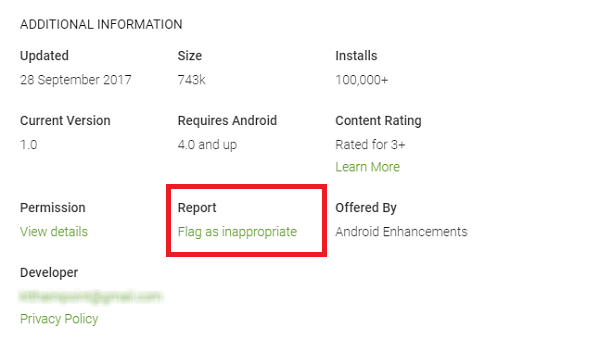 Once you have selected the appropriate reason, click on Submit and your report would be directly sent to Google. Google will then review your submission and take necessary actions towards the app listing if the app is fake. 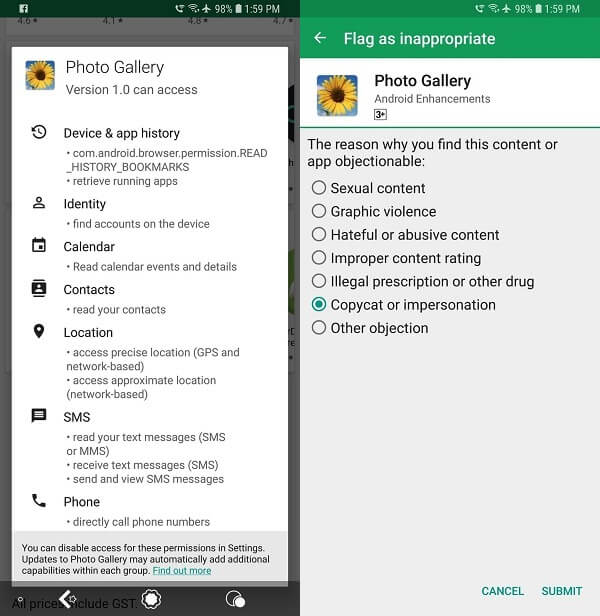 You can also do your part by warning other fellow Android users about the fake app by asking them to review the app and Flag the App Inappropriate.

How to Identify Fake Android Apps & What to do?

You easily uninstall these fake Android apps, if you find these apps are fake or if they don’t serve the purpose you were expecting them to. The better alternative is not to install them in the first place because prevention is always better than cure.

How to Block a Website on Browser, PC and Router Level

How to Change Country on Amazon Shopping App