While there’s not one single best dock for Linux, here are the best Linux docks to try on Ubuntu, Fedora, Arch, and any other Linux distro.

The dock allows different layouts as per your preference which can include one, two or even multiple panels. Unlike the native KDE panels, Latte Dock lets you change the color, transparency, and blur manually. Which brings us to another unique feature, blur. You won’t find many Linux docks that allow background blur.

Integration with the Plasma desktop also brings the ability to pin Plasmoids or Plasma widgets onto the dock. This isn’t possible with most other docks. Latte dock is also quite customizable. While you cannot change individual icons in the dock, you can change just about everything else.

Cairo is a former favorite of mine and perhaps the most customizable Linux dock out there. The customization does come at the price of complexity though. Cairo Dock’s settings are so deep and complex that the configuration settings default to a simpler layout. However, if you plan on using Cairo dock, the more familiar you make yourself with the Advanced mode the better. 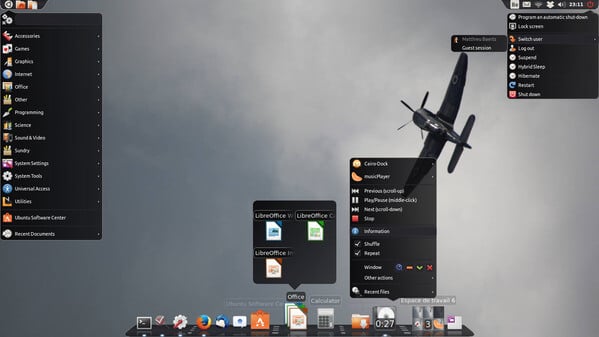 The dock features a plethora of different customizable animations, themes, effects, etc. Anything that you want to change about the dock can be changed. This includes changing icons and other properties of individual app icons. It can display open apps, minimized apps, or only the pinned apps as per the user’s preference.

It is simply one of the most flexible and advanced Linux docks available. The dock is not made specifically for a particular desktop environment. In fact, Cairo Dock creates its own environment upon installation that you can log into instead of your regular desktop. Cairo dock can display not only apps but also system tray icons and all the other information you expect to see on a desktop panel. 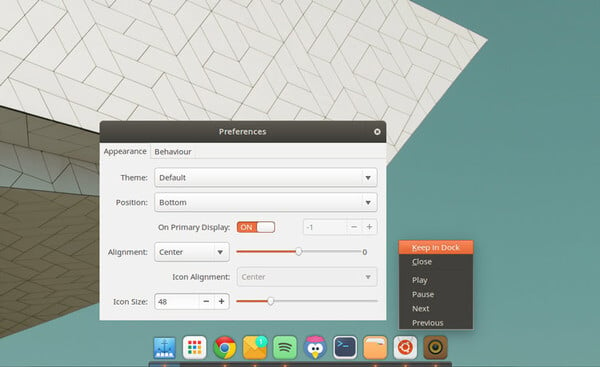 Plank Dock is the simplest dock you’ll ever use. Its only purpose is to be the kind of dock users want and do just that, out of the box. Plank’s configuration module called Plank Preferences doesn’t offer a lot of room for customization. You can change the icon sizes, space between them, use one of the built-in themes and a few other things. There are plenty of plank themes that can be installed from the Internet but the process is not quite as simple as using Plank.

It ships by default on some desktop environments such as the Pantheon Desktop.

Dash to Dock is not counted amongst Linux docks mainly because it’s not a dock. Not in the traditional sense anyway. It is, in fact, a GNOME extension which brings the Favorite apps from the GNOME overview menu to the desktop in the form of a dock. This means you cannot install or use this on any other desktop environment but GNOME. 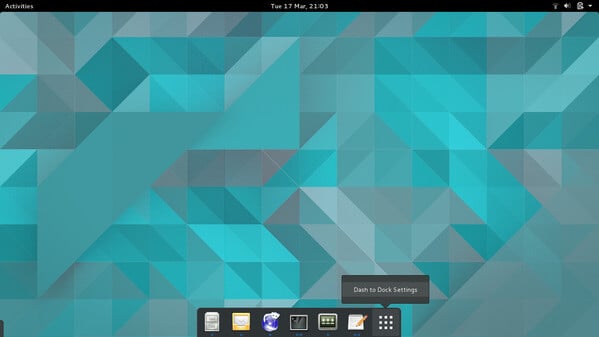 Technically, it does bring or create a dock on to the (Ubuntu) GNOME desktop so it’s on our list of the best Linux docks. And it deserves to be because it gives you so many options that some other docks don’t. These options are also hidden away in a configuration module which can be accessed only from the GNOME Tweak Tool or the Extensions extension (another GNOME extension). Since GNOME is the default desktop on Ubuntu now, this extension becomes even more important as it provides a more customizable Ubuntu dock.

By default, the dock simply displays pinned app icons and currently open apps as well as an app drawer button. Basically, how the Ubuntu dock is supposed to behave. It can be used as a traditional bottom-centered dock or a left-placed Ubuntu-like dock. The dock can even be extended to cover the entire width and act more like a panel for a more Ubuntu-like experience. Being a GNOME extension, it features integrated support for desktop notifications, timers, etc., windows previews, and multiple monitor support.

Dash to Dock is a GNOME shell extension and can, therefore, be found on the GNOME Extensions website. If you don’t know how to install GNOME extensions, check out this link.

Like Plank, Docky provides a straightforward experience and is actually as simple to use as Plank. It differentiates itself by being a more MacOS like dock out of the box. Not only in terms of looks but Docky is just a more advanced version of Plank. It gives you more animations, effects, and features in comparison while still being as simple as it can be. 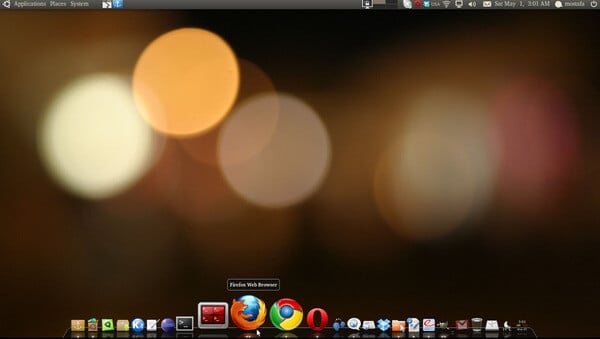 Although, MacOS has long moved forward from the 3D tray like look Docky hasn’t. Not by default, at least. Not many Linux docks can boast of being as polished of an experience as Docky. All the polish and nice animations do mean that Docky is not quite as lightweight as Plank. It is still not as resource hungry as something like Cairo Dock though.

Recently, the dock has even gained integration with the GNOME desktop making it even better as an Ubuntu dock. Even if you don’t use GNOME, you can still switch between 2D and 3D style dock, change themes, enable or disable intelligent hiding, add or remove docklets, and turn on or off a panel mode. The docklets or Docky widgets help provide information such as a clock, weather, and CPU usage.

Docky is available officially in the Ubuntu repositories so there’s no need to add any PPAs. 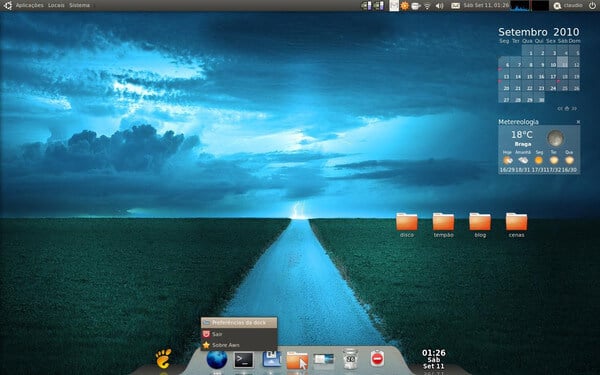 Being as old as it is means there has been a lot of time for development. Features include theme support, different view-modes (3D mode, curve mode, edgy mode and etc), an expand mode that lets the user turn the dock into a long panel, window grouping, and support for many different plugins.

Besides Cairo Dock, AWN is one of the most configurable Linux docks available. It has excellent support for themes coupled with the ability to embed external applets with ease. For some, the aging might be a bit off-putting but it has resulted in a stable, solid, reliable experience.

Avant Window Navigator is available officially in the Ubuntu repositories so there’s no need to add any PPAs.

That said, DockbarX is a standalone dock first, which can be integrated into Xfce for a better experience. That means you should still be able to use it fully on any other desktop environment.

DockbarX is compact, lightweight, nice looking, very configurable, and has a sufficient amount of functions.

To have more themes for DockbarX and DockX use this command

If you do use the KDE Plasma desktop, KSmoothDock is a cool option featuring a parabolic zooming effect like the MacOS dock. It still follows the traditional Linux model of a desktop panel. Thus, the dock comes with an application menu, launchers, the pager, the task manager, and the clock. KSmoothDock currently does not support the system tray.

One of the major disadvantages though is that installation is not quite as simple as adding a PPA and installing a package. Clear instructions are provided on the dock’s Github page though.

After installation, KSmoothDock can be launched from the application menu.

Simdock is another MacOS inspired Linux dock with Avant Window Navigator-like pseudo-transparency. It has been around since 2007 although the original developer no longer maintains it. Currently, a PPA is maintained for Ubuntu by onli along with an AppImage for other distros. Features include customized launchers, smart implementation of Xrandr, MacOS-like zoom effects, and working without a compositing window manager. 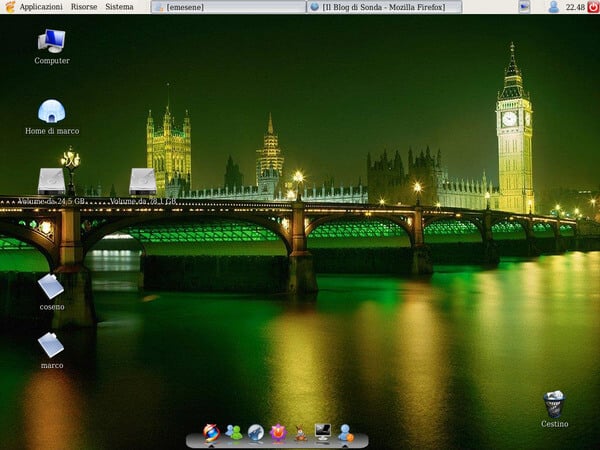 tint2 is basically a lightweight panel, not a dock. But a dock too, is a panel, after all, with bigger icons that are aligned centrally. It’s already included in the repositories of most Linux distributions. And it can be configured to look and behave like a dock.

tint2 obviously works with any desktop environment or Linux distro as long as it is using Xorg. It can be configured to display a system tray, battery monitor, task list, etc. It can display a bunch of things such as displaying all open applications in specific or all desktops, display multiple instances of the same application, display output for user commands, etc.

While the list of the best Linux docks above is in no particular order, you can expect the options towards the bottom to be more of a hassle than the ones on towards the top. Moreover, Linux has a number of other app launchers that don’t look and behave like docks. But if you’re looking for docks, there is hardly a name that is still around that you won’t find on this list.

5 Best iPhone Apps to Detect WiFi Thieves and Block them