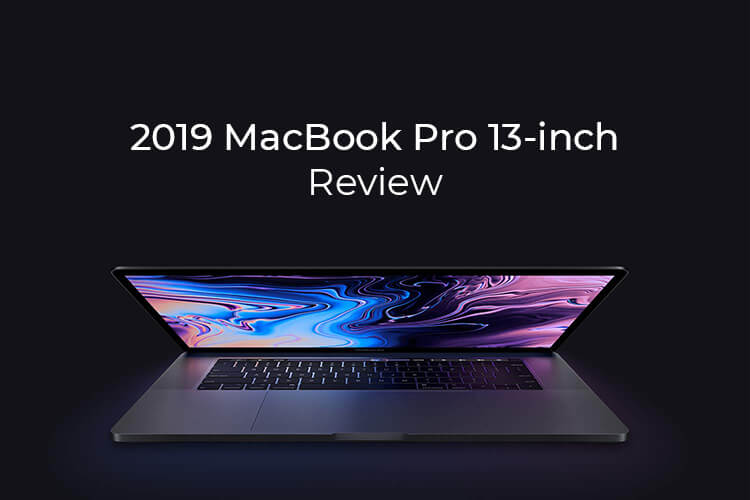 Apple, as usual, upgraded their MacBook lineup with the new series of 2019 MacBooks, Air, and Pro. The new series of MacBook Pro is aesthetically similar to the older variants of the MacBook Pro, with a touch bar, Touch ID and the butterfly keyboard. However, on the hardware side, it is quite an upgrade and well-tuned to perform at its best as an ultrabook.

Here is a quick review if you were looking into knowing more about the new Mid 2019 MacBook Pro 13-inch.

Well, it is obvious that Apple may have something new in the internal structure or the technology used with a new series of MacBook, while the external structure stays the same. Apparently, there is a major up-gradation of Intel processors from 7th generation to 8th and 9th Gen. The 13-inch 2019 MacBook Pro comes with a quad-core Intel i5 8th Gen processor, clocked at 2.4GHz. On the other hand, the 15-inch model comes with an octa-core 9th Generation Intel Core i5, i7, and i9 CPUs, which essentially is the top-notch variant in the series. Apple knocked off the 12-inch MacBook for the 13-inch series.

The retina display has been replaced by the True Tone Retina display, which gives pixels more brightness, contrast ratio for enhanced user experience with the 13-inch MacBook Pro. The T2 Chip offers the Siri trigger and protection from security threats. There is only one RAM variant, which of 8GB and the storage options of 256GB as well as 512GB SSD.

Apple claimed to have fixed the previous version’s faulty Butterfly Keyboard mechanism, which often used to pop up with many units sold. The new MacBook Pro 13 2019 also includes a similar butterfly keyboard mechanism, but you will get an improved experience. There is a touch bar above the keyboard, and Apple has focused on to brining larger touchpad/trackpad to the MacBook Pro 13. The processor is coupled with an Intel Iris Plus Graphics 655 onboard graphics card.

Also read: How to Free up Storage Space of Mac Mail App?

Apple introduced the MacBook Pro as a midrange performer, for those who want a compact design running macOS. The latest model, MacBook Pro 13-inches (2019), comes with a powerful processor onboard which can perform well on a daily basis. The new “Coffee Lake” microprocessor architecture is much faster than the previous versions, so you can expect a decent output every time. As an average daily user, you can feel the optimized performance which synchronizes well with the memory and the processor. 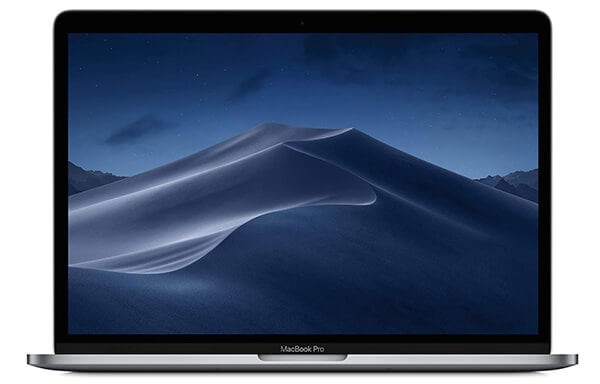 The inbuilt memory is not at all bad but as a beginning performer. The 8GB variant is an “okay” choice to go with. However, there is no 16GB variant launching as of now, which leaves you this as the only choice. The new MacBook Pro 13 uses 2133 MHz LPDDR3 8GB RAM, which performs well with less power usage. The lightweight ultrabook, performance, wise, is suitable to use as a daily driver with coding, small video editing, and other normal usages. The Intel Iris Plus Graphics 655 GPU provides an enhanced view through the True Tone Retina display, but not enough to render 3D in the long run.

As mentioned above, Apple’s new MacBook Pro 13-inch comes with a 13.3-inch WQXGA display, having the resolution of 2560×1600 px. The display has a pixel density of 277ppi, which delivers amazing picture clarity. On the brightness side, the 500nits of luminosity literally lit up the room when you use it. The T3 Wide Color Gamut ensures an enhanced color view through the screen. Also, it switches the white balance based on the surrounding light automatically. 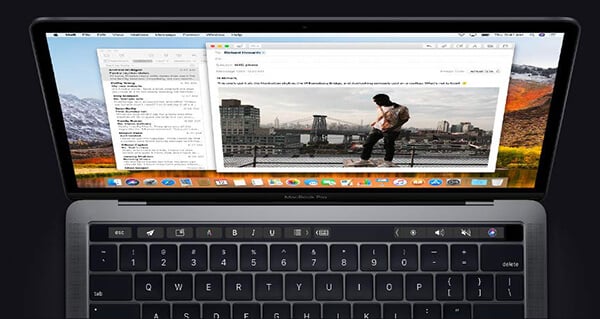 Similar to the preceding variant, the screen has a thick bezel around it, but not as thick as you see on MacBook Air. The screen is more immersive now. Since the size v/s resolution is greater, images and displayed in better clarity.

Apple’s T2 chip embedded with the new MacBook Pro provides excellent audio control. Just as before, the stereo speaker outlets are located on both sides of the keyboard, with amazing sound output.

Few of the most amazing factors which Apple users brag about their MacBooks are the keyboard and the trackpad, which drives more productivity. Apple recently replaced its traditional scissor-cut keyboard technology with the new butterfly mechanism for the keys. The Butterfly, as the name suggests, is a two-sided hinge mechanism, which divides key tap force equally to both sides. It did reduce the typing noise and hassle in pushing the keys. However, many of the sold units faced big issues, which pulled off the keys following long-time usage. Now, they have finally addressed the issues and fixed the same with the new MacBook Pro (2019). 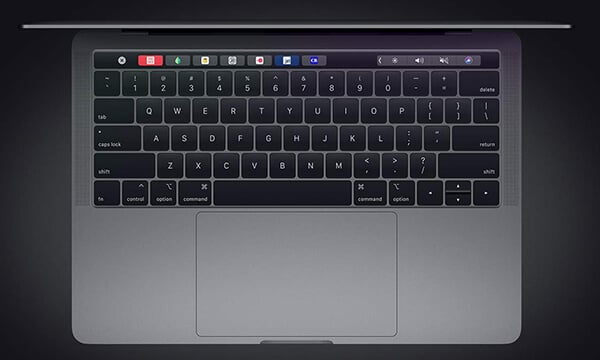 Keys are more silent and ergonomically better now. The travel distance of keyboards is very small but crispy. So, there is no false key tapping. Above the keyboard, you will get a lengthy touch bar, which lets you use controls based on which software you are in. Talking of the touch bar, it is the smart control panel for everything on your MacBook. From changing speaker volume to choosing color palette in photoshop, there is nothing you could control with this tiny touch display panel on your MacBook Pro. On the right goes the power button with the Apple TouchID. You can also make payments using TouchID, thanks to the Apple Pay.

The spacious trackpad on the MacBook Pro is another thing to mention when it comes to the ergonomics. The Force Touch-enabled trackpad takes up a wide space, so you can move the cursor along so easily.

The 2019 MacBook Pro 13-inch is an amazing ultrabook Apple released this year, with much-upgraded hardware for tuned performance. The key features including TouchID, TouchBar, Force Touch trackpad, and newly released Intel Core i5 CPUs on the board. This is one of the best laptops to go for in 2019 if you are looking for a compact device to use at work or wherever else. The 8GB of RAM ensures smooth performance with decent multitasking.