On the Android phone, you can set your Google Voice Number as a secondary or primary number instead of SIM card number. When you set as Primary Number, all the outgoing calls can be made through this Google Voice number. This is going to be a free solution for those who want to hide their primary number. Google Voice number is free (with a bunch of features), and it can act on your phone just like a dual SIM phone. You can switch between the number for each outgoing calls when you make from Android.

Let us see how to set Google Voice number as the primary number for Android users to make all outgoing calls.

First, you have to log in to Google Voice and make sure that you have an active Google Voice Number. If you already have a Google Voice, you can see the number on the left sidebar just like the screenshot below. 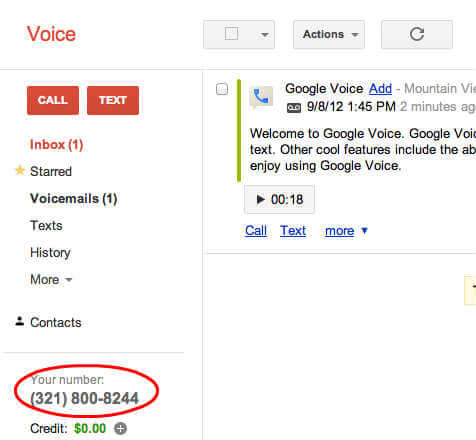 Please go through the instructions to get  Google Voice Number if you don’t have already one. This is pretty easy to follow, and you can get a Google Voice number for free.

We are assuming that you already have an Android phone witha standard SIM card on it and an assigned phone number for that. By default, all the calls will originate from your SIM number when you dial a number. Now let us see how to switch this default number on Android phone. 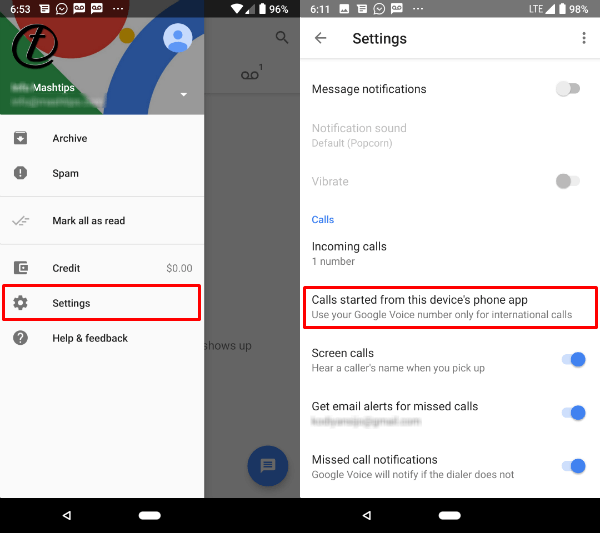 Open your Google Voice App on Android, and tap on Settings. Scroll down on Settings screen to the Calls section. Now tap on “Calls started from this device’s phone app” to chose the outgoing calls number.

Google Voice is free to call in US and Canada. However, if you are living in the US and calling to Canada number with AT&T or Verizon, they may charge you for international calls. 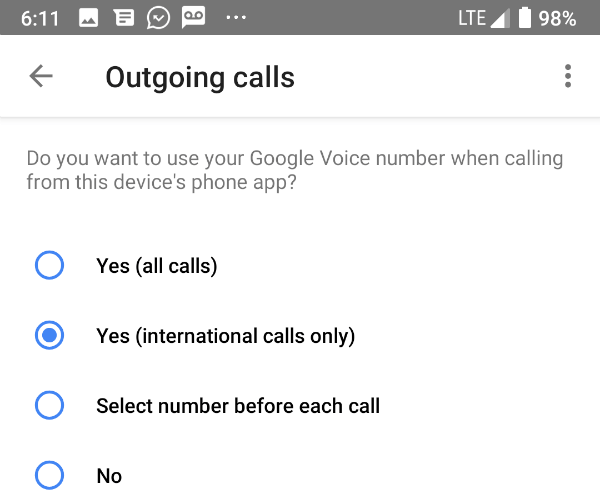 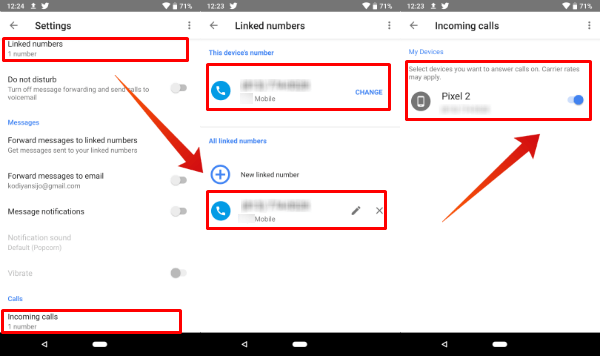 Now, from Google Voice Settings > Calls > incoming calls > My Devices > Select the device you want to answer calls. Make sure your current device set to receive the calls for all incoming Google Voice Calls. Once you set this, you will receive all carrier number calls and Google Voice number to the same phone.

Once you start to route both mobile phone calls and Google Voice calls to the same phone, it is not easy to recognize the incoming calls. The quick solution to turn on “Incoming Call Options” for Google voice. Now you have to press number “One” to accept incoming calls to Google Voice Number. The calls to cell phone number will work as usual. This is a bit annoying, but you have other options to record calls to incoming calls, etc., are the free bonus for using Google Voice.

Now you can have a dual phone number on an Android phone. The good thing about this is, Google Voice is a free service, and you don’t have to spend a penny for this extra number. In addition to this, those who are using Google Voice number for international calls, you can set Google Voice number exclusively for international calls. You can call outside the US just like regular number dialing, and Google will redirect calls through their server. The Android users can use this Google Voice Number and SIM card number on the same phone just like a dual SIM Android phone.

How to Use Instagram Reels and Create TikTok-Like Videos

How to Find AirPods with Find My AirPods Feature?