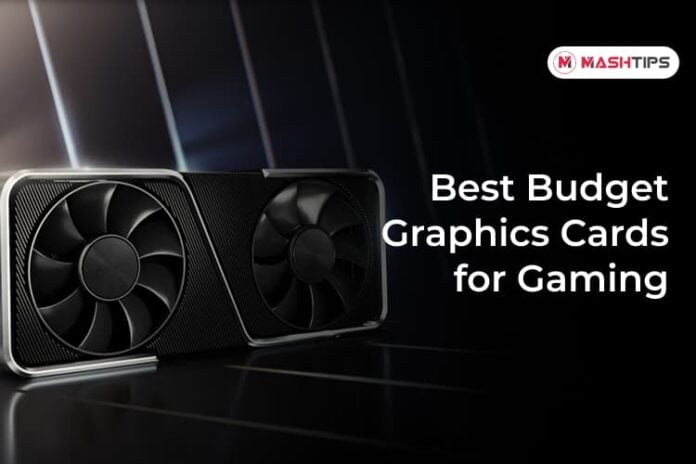 Even though we have a long list of Graphics cards that offer great performance, Most of them are highly expensive. There are even good performing graphic cards you can buy within your budget to meet your needs.

Here is a list of the best budget graphics cards for gaming you should look for in 2021.

Nvidia Geforce GT 1030 is an entry-level GPU from Nvidia. This is a 2GB GPU with Gddr6 memory. If you have any plans to play games on your GPU this is the least possible GPU that you have to go for. This is an entry-level low budget graphics card. The GT 1030 comes with Pascal architecture and has a memory size of 2GB.

The GT 1030 has two outputs, SL-DVI-D and HDMI 2.0. The Graphics card has HDCP support. The GPU requires a 300-watt power supply to run in which the GPU consumes about 30 watts of power. The GT 1030 does not require an external power cable.

The Graphic card supports DirectX version 12 and Open GL 4.5. The GPU works fine in windows version 10, 8, 7 (32/ 64) bit. Compared to other graphics card in this price point, GT 1030 offers decent performance for a very low price. This GPU is great value for money and it provides a good experience for entry-level gamers.

The GTX 1650 requires a 350-watt power supply to work perfectly from which it consumes 75 watts power. The GPU does not require an external power connection. The graphics card has support for DirectX 12 and Open GL 4.6. The graphics card support windows 10 / 7 64 bit.

The Radeon RX 570 is a GPU produced by AMD. The RX 570 is a decent GPU that provides smooth 1080 P gameplay. The GPU supports most of the games on high settings in the 1080p resolution.

The Radeon RX 570 comes with 32 compute units and a base frequency of 1168 MHz which can be boosted up to 1244 MHz. It has 2048 stream processes and 128 texture units. The GPU can provide up to 5.1 t flops of power. However, the GPU is a bit power-consuming. The GPU needs 450 watts PSU to perfectly run. It draws 150-watt power and it also requires an additional input power cable.

RX 570 is a mid-budget GPU that offers great value for money. The GPU is great in terms of its performance, but it has some heating issues and higher power consumption. Even at a very low price point, the GPU offers smooth 1080p gameplay. It is one of the best budget GPUs.

GTX 1650 super is a GPU manufactured by Nvidia with Turing architecture. This GPU comes with a super compact design and 4K HDR-ready output. This GPU has dual fans to make It much cooler while working. The GPU comes with a 128bit 4GB gddr6 memory. It has memory speed of 12 GB per second.

The 1650 super can provide up to a boost clock of 1725 MHz. The GPU can support up to 3 displays. It has DisplayPort 1.4, HDMI 2.0 b, and a dual-link DVI d. The GPU requires a 350 watt power supply to run. It requires a 6 pin input connector to power the GPU through which the GPU consumes about 100 watt of power.

The 1650 super offers a great gaming experience providing a 1080 p high pressure nearing 60fps. The GPU is less power-hungry and has better cooling mechanics. The lower-priced 1650 4gb edition is very less power compared to the 1650 super.1650 super is one of the best budget GPU and an ideal choice for a mid-budget gamer.

We decided to include the old RX 580 rather than the new RX 5500 XT GPU since RX 580 costs less and performs almost similar to this GPU. RX 580 is a 3-year-old card that still has relevance. The Radeon RX 580 graphics card is a graphics card manufactured by AMD.

The RX 580 has 2 memory variants 4GB GDDR5 and 8GB GDDR5 memory with a 256-bit memory interface. the GPU has a memory speed of 8GB per second. The graphic card has a display port that can support HDR and an HDMI port that supports up to 4K 60fps.

The AMD Radeon RX 580 is a good option if you have a decent PSU that can provide the required power. AMD RX 580 is one of the best budget GPUs considering its price to performance.

The GTX 1660 6gb GDDR5 edition GPUis built on Turing architecture. It comes with a super-compact design along with a metal wrap-around backplate. The GPU provides 4K HDR-ready output. The GTX 1660 is a highly powerful GPU with 1408 Cuda cores. It has 6 GB gddr5 video memory with a 192-bit memory clock.

The GTX 1660 supports PCI.e 3 and has a memory speed of 8GB per second. It has 3 display ports 1.4 which provide up to 8k 60fps output and an HDMI 2.0 b that provide 4K 60fps output. The Graphics card can support up to four displays. The GPU requires a 450-watt power supply to work smoothly. An external 8 pin connector is required to power up the GPU. The graphics card consumes about 120 watts of power.

The Graphics card can provide decent frame rates at the ultra quality and provides stunning visuals. The GTX 1660 is a future proof best budget graphics card, It can also be used for the entry-level 1440 P gameplay.

We decided to include 1660 super over 1660 ti since this list is meant to be budget-friendly. The GTX 1660 ti graphics card is slightly more powerful and costlier than the 1660 super. But 1660 super is very similar to 1660 ti in performance when it comes to 1080p gaming.

The GTX 1660 super also comes with the Turing architecture. It comes with a dual-fan design and a metal wraparound backplate. The 1660 super has 1408 Cuda cores and 6gb gddr6 memory. The Graphics card has a 192-bit memory clock which provides speed up to 14 Gbps.

Finding a GPU will be a difficult task due to the wide variety of graphics cards available in the market. However, not all graphics cards are good in terms of price to performance ratio. Since we are in the budget segment we have to find graphics cards that offer maximum value for money.

All the above-mentioned budget graphics cards come under the affordable segment. They offer great performance and some of them are even future proof also. All these cheap graphics cards offer smooth 1080p gameplay.

You Can Get 100GB Storage For Your Tablets. Absolutely Free.