HomeGames12 Best PS4 Games You Can Play on Playstation 5 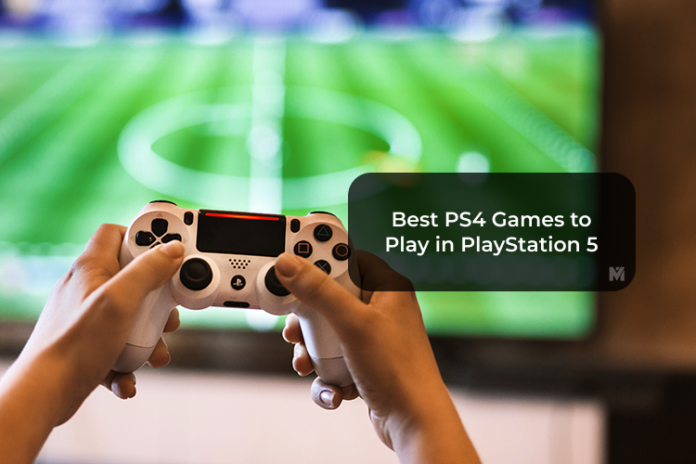 With the launch of the new generation PlayStation 5, Sony introduced a new level of hardware capability to its consoles. PlayStation 5 comes with top of the charts specifications and capabilities. You can also play a lot of PS4 games on the brand new PlayStation 5.

Here, let us discuss some of the best games that were initially released for PlayStation 4 but can be played on PS5.

God of war 4 can be undoubtedly said as the best game made for PlayStation 4. Santa Monica studio utilized everything the PS4 could offer and made an exceptionally good game. It is a linear open-world game that is excellent in all areas. The game had a solid story, exciting gameplay with dynamic combat mechanics, and breathtaking visuals.

Even on PS4, the game delivered a quality experience that never let down the god of war fans. Sony has now made it possible to re-experience this masterpiece in the PlayStation 5 with better frame rates and resolution. The game has considerably better performance on the PS5. If you haven’t had the chance to experience it on PS4, don’t hesitate to try it on PS5, it won’t disappoint you.

Related: 10 Best PS5 Racing Games You Should Try out on Your PlayStation

Ghost of Tsushima was a visual masterpiece made exclusively for PlayStation. The game was a visual treat for the gamers mixed with an exciting samurai combat system. The open world is filled with lots of activities and camps to raid if you want to spend some time away from the thrilling main story.

Sony has now released a director’s cut edition for its new PS5 with an addition of a new island. The director’s cut features a whole new island to explore. The frame rates have been enhanced from PS4 and resolution has been pumped up. If you wish to have a pleasant time playing as a samurai and exploring the beautiful open world, the ghost of Tsushima is your pick.

Horizon Forbidden west is announced as a launch title for PlayStation 5. So if you want to refresh the story of Aloy and once again explore the beautiful open world, it’s a great time to play horizon zero dawn. Horizon zero dawn is an open-world action-adventure game that features the main protagonist Aloy.

The main story of horizon zero dawn is focused on Aloy, an outcast, and her journey. The story takes place in a post-apocalyptic world where the modern world has gone extinct. The open world is filled with metal creatures and beautiful landscapes. The game offers a large variety of weapons, outfits, and other usable materials.

The Last of Us was initially made for the PS3, which turned out to be the best-looking game on that console. Then the popularity of that game made it to be remastered on the PS4 and now you can enjoy the masterpiece in PS5 also.

The Last of Us is a semi-open-world zombie game that has a deeply emotional story. The story part is so strong that we get attached to the main characters named Joel and Eliot very easily. The main story is based on the outbreak of a zombie virus that turns humans into zombies. The plot has been executed greatly by adding key emotional elements and strong side characters. The last of us also received a sequel which added more depth to the story and a good ending. So if you haven’t tried the series yet, this is the best time to do it.

The Last of Us Remastered Hits - PlayStation 4
Check on Amazon
Today's Deal: $23.00 Off

The Last of Us Part II - PlayStation 4
Check on Amazon

Related: How to Take a Screenshot on PS4 and PS5

Uncharted the thief’s end is a game that was designed for PlayStation 4. The last game of the Nathan Drake series was good in almost all ways. It has a decent storyline, thrilling combat, exceptional graphics, and a beautiful world to explore. The game has many strong points like camera movements, climbing mechanisms, combat, etc.

Uncharted was a visual treat for the PS4 gamers. Now it can also be played on the PlayStation 5 which provides better resolution and frame rates. The game also features a multiplayer mode with various modes to choose from. Even though the game has so many good elements, there are some things that pull the game back. The story feels predictable at times and some missions feel repetitive. Altogether, Uncharted the thief’s end is a must-try for a PS5.

Insomniacs Spiderman and Spiderman Miles Morales are two great open-world games. They implemented the marvel character with its full potential in the game. The swinging climbing and freefalling make the gamers want to return to that feeling. The developers used the most powerful marvel villains in the spiderman comic series which gave the game a connection to all the spiderman fans.

The open world in spiderman feels very alive due to all the activities and collectibles lying around the map. There are a large variety of suits and equipment which can be swapped between easily in the game. With the newer techniques like ray tracing, the game looks stunning on a PlayStation 5. With higher frame rates and increased visual quality, Insomniac’s Spider-Man is an unavoidable game on a PS5.

Related: 10 Best Gifts for Gamers to Surprise Them on Christmas 2021

Days Gone is another well-developed zombie apocalyptic game on PS4. Now it has been remastered to work on PS5 as well as pc. Boosted frame rates, better visuals, and small tweaks made the game even more enjoyable. The game progresses along with the journey of Deacon St John and his search for his wife Sarah.

The open world of Days Gone is beautiful but filled with terrifying zombies that attack you in packs. They become much stronger in the night and can easily chase you down. Before learning how to get rid of these zombies, your only option is to run and escape. Defeating large herds of zombies, destroying the zombie nests, and protecting your shelter, all make days gone a wonderful game.

Final fantasy 7 is a classic game that had addictive elements to it. Many fans around the world loved the way the game is built. Now, the developers are remaking this game in parts. The first part of the final fantasy 7 remake has been released and it is a great game. It can also be experienced by the PS5 gamers in the best output.

Final fantasy 7 is a JRPG game that has turn-based battles. The game merges cinematics along with the actual gameplay which gives them an exceptional feel. The hack and slash combat mixed with powerful enemies and slow-motion special attacks is a visual treat. The remake has added much more content which added many side missions. Most of these missions are actually time waste which makes the game a little bit sluggish.

Rockstar has managed to build an exceptional open-world game that is equally strong in single-player as well as multiplayer. GTA 5 was initially released for PS3, due to its popularity, it was then remastered into PS4, PC, and now PS5. The PS5 version was announced during the announcement of PlayStation 5 and it is yet to be released.

Grand Theft Auto is one of the finest open-world games ever produced. The details, graphics, gameplay all had a rockstar touch. The game allowed the players to create a world they like and bring in their friends to it. The developers are still adding content into the game on a periodic basis. It is one of the most played games of all time. If you haven’t had the chance to experience this game, this is a perfect time.

The most detailed game ever produced, nothing less than that can be said about Red Dead Redemption 2. The sequel to Red Dead Redemption was tailor-made for PlayStation 4. The marshlands, tropical forests, and vintage towns are a visual treat to our eyes. The main protagonist Arthur Morgan is the spine of the game. The emotionally touching story is one of a kind. The developers succeeded in adding depth to the main characters as well as the NPC’s. The way the characters react to various actions of the main character is exceptional and highly detailed.

RDR 2 is a game that is good in all aspects. It excels in the story, gameplay, graphics, art design, and all other aspects. It can be said as a masterpiece of this century. RDR 2 can also be said as an RPG since various decisions we make during the game can affect the ending. The beauty of the game is unparallel to any other game and it looks extremely good in the newer PlayStation 5.

Bloodborne is a horror game that is very hard to complete. It focuses on fast and tactical combat that is very hard to master and requires skill. Bloodborne has a stunning horror world that is dark and dull and puts the players in a frightening situation. Even though the game is graphically enhanced to a good extent, PS4 had a longer loading period which spoiled the experience. But with the introduction of PS5, this is solved and you can have the utmost horror experience. Bloodborne is a great game to try on your Playstation 5 if you love hard combats and frightening bosses.

Bloodborne - Game of the Year (PS4)
Check on Amazon

Related: How to Use Apex Legends Crossplay to Play with Anyone on Any Console or PC

Quantum break was one of the finest games made by the remedy studio. Control which is also made by remedy studio is a more refined version of quantum break. Telekinesis is utilized to its maximum potential in all parts of this game. This makes it a very brilliant piece of work to enjoy. The main character Jessie is filled with lots of questions and looking for answers. The whole game revolves around an office that has many layers to it. The world is filled with supernatural abilities to uncover, paranormal activities, and secrets.

Initially, control was released on PS4 and pc. The game came with extreme ray tracing functionality which changed the entire look of the game. But the PS4 was not able to pull off its full potential in its older hardware. But now, the PS5 comes with its enhanced ray tracing ability and makes control even more enjoyable with eye-catching visuals. Control is a beautiful-looking game with superior ray tracing capabilities, so if you own a PS5, never this one.