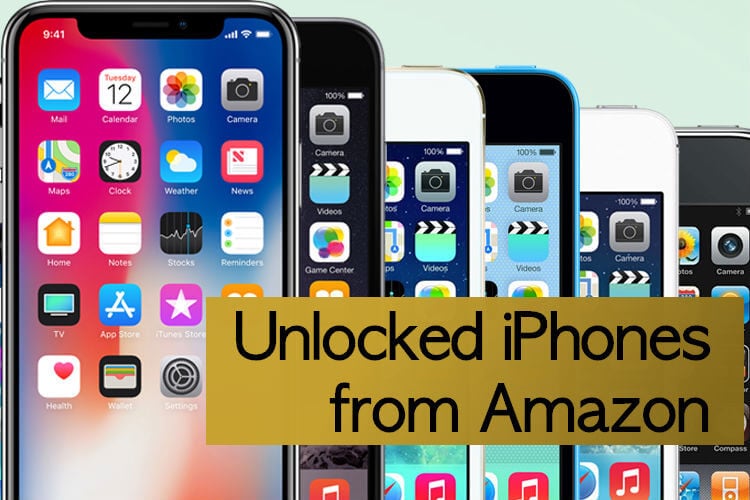 The iPhone 11 has been out for a while now but it costs north of a thousand dollars in the US, and it is even more expensive in other parts of the world. If you’re looking to buy an unlocked iPhones from Amazon, buying the iPhone 11 might not be the best option.

Here we have compiled a list of the best, unlocked iPhones you can get from Amazon, starting from an unlocked iPhone XR and going all the way to the iPhone 6S Plus and iPhone SE. 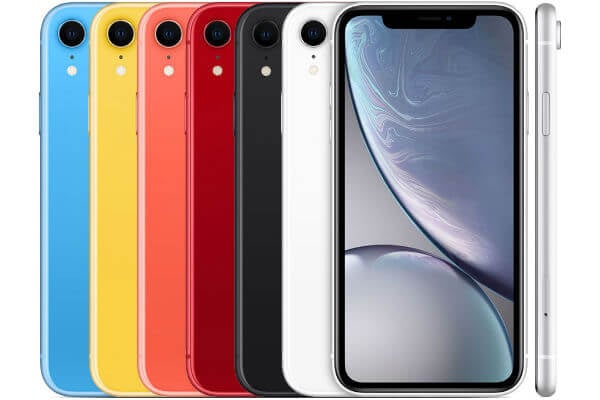 The iPhone XR looks similar to any modern iPhone, comes in at a much lower price point, and offers the best battery life outside of the iPhone 11 lineup.

Apple iPhone XR is the best selling iPhone from last year. Barring the low 828 x 1792 pixels resolution of the 6.1-inch display, the iPhone XR was a great device for the price.

While the display is low-res, it is still a Liquid Retina IPS LCD panel and looks good enough with 326 PPI. It is scratch-resistant glass and has an oleophobic coating. Underneath lies the powerful Apple A12 Bionic hexacore processor. It’s coupled with 3GB of RAM and either 64GB, 128GB, or 256GB of storage.

There is a single camera on the back featuring a 12MP shooter with support for OIS (optical image stabilization). It can record video up to 2160p at 24, 30, or 60fps. The 7MP front-facing camera is limited to 1080p at 60fps.

In terms of real-world usage, the camera does not hold a candle to the iPhone 11 lineup, nor the Pixel 3/4, and is comparable to last year’s Galaxy Note 9 and S9. With the low-resolution display and a 2942mAh battery, the iPhone XR won’t die easily. The iPhone XR also has support for wireless charging and is available in Black, Red, Yellow, Blue, Coral, and White colors. 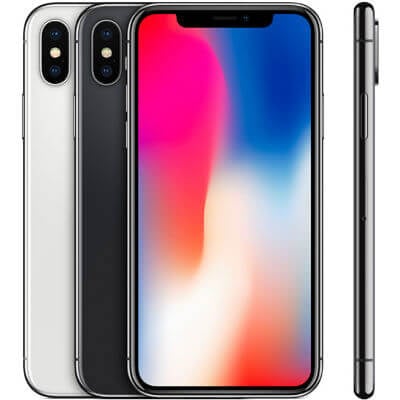 The iPhone X was the first of its kind and it will always be one of those special iPhones if you’re into nostalgia. It looks and feels like the most premium iPhone you can buy but comes at a slightly lower price.

The iPhone X brought an end to the aging iPhone 6 design and brought the iPhones into the new era of near bezel-less displays. It even one-upped the competition with the notch design.

The iPhone X features the Apple A11 Bionic chipset which is two years old at this point but still very capable. Storage options include 64GB and 256GB with 3GB of RAM. The back of the phone sports two 12MP lenses, one of them being a telephoto lens.

It can record video up to 2160p at 24, 30, or 60fps. On the front, you get a 7MP shooter capable of recording at 1080p at 30fps. The 2716mAh battery should get you through the day but don’t expect a lot. There is support for wireless charging, and it comes in Space Gray and Silver. 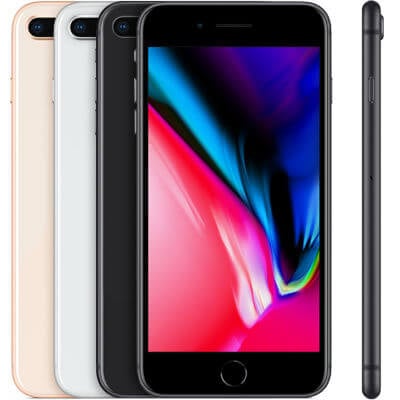 If you just want an iPhone that works, and works well, and you don’t care about the design much, the unlocked iPhone 8 Plus will be an excellent choice.

The iPhone 8 Plus is powered by Apple A11 Bionic chipset with 3GB of RAM. It ships with iOS 11 out of the box but can be upgraded to iOS 13.3. There are two storage options available with 64GB or 256GB of storage.

For selfies, it packs in a 7MP sensor capable of recording 1080p video at 30fps. Apple launched the iPhone 8 series alongside the futuristic iPhone X. These new iPhones were only marginally better than last year’s iPhone 7 series. Naturally, the iPhone 8 Plus is only a little better than the iPhone 7 Plus.

iPhone 8 Plus features a 5.5″ Retina IPS LCD touchscreen with a resolution of 1080 x 1920 pixels at a 16:9 aspect ratio. The pixel density comes out to be around 401 pixels per inch. The display also supports a wide color gamut and 3D Touch. It is protected by Ion-strengthened glass and an oleophobic coating.

The smaller iPhone 8 doesn’t pack in as much as the iPhone 8 but it works just as well if not better. It packs in pretty much the same internals but has to drive a lower resolution display.

iPhone 8 packs in the same Apple A11 Bionic chipset as its bigger sibling, the iPhone 8 Plus. This is also the same processor powering the iPhone X. While the display is also still Retina IPS LCS, it is smaller at 4.7-inches with a resolution of 750 x 1334 pixels.

The aspect ratio is still 16:9 and the pixel density is 326 pixels per inch. Barring these differences, the display is identical to the one in the iPhone 8 Plus. Meaning you do get support for a wide color gamut, 3D Touch, and Ion-strengthened glass protection along with the oleophobic coating.

The phone ships with iOS 11 and is upgradeable to iOS 13.3. With the smaller iPhone 8, you get 2GB of RAM instead of the 3GB on the Plus version, but the storage variants are the same at 64GB or 256GB. The iPhone 8 also comes with a single rear camera compared to the dual lenses on the bigger model.

Make Sure These Pins are Unlocked When you Buy Used iPhones 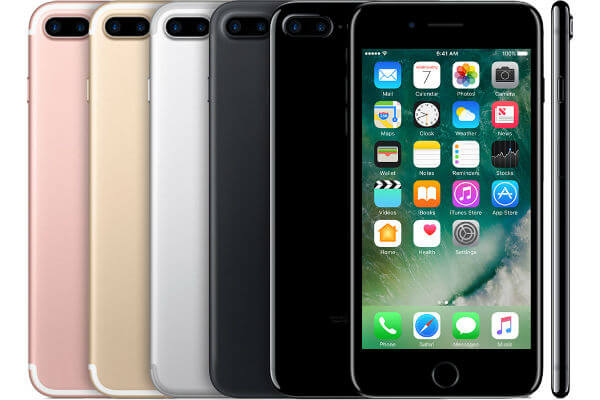 iPhone 7 Plus, along with the iPhone 7, was one of the first iPhones to ship without a headphone jack. Other than the lack of wireless charging, this is quite similar to the iPhone 8 Plus, but a whole lot cheaper.

Launched all the way back in September 2016, the iPhone 7 Plus is still a pretty good phone to buy if you don’t care for the Android side of things. It has the same 5.5-inch Retina IPS LCD display as the iPhone 8 Plus.

That means you get the same 1080 x 1920 resolution, 401 pixels per inch, and a 16:9 aspect ratio. It even supports features such as a wide color gamut, 3D Touch, has the same 625 nits of brightness, Ion-strengthened glass protection, and oleophobic coating.

Being a generation older, it is powered by an older Apple A10 Fusion chip and ships with iOS 10.0.1 out of the box. The A10 is still a pretty powerful chip and iOS can be upgraded to iOS 13.3. In terms of RAM, you still get the 3GB that you would on an iPhone 8 Plus. There is more flexibility in storage options with 32GB, 128GB, and 256GB.

The camera setup is also the same with dual 12MP cameras with f/1.8 and f/2.8 (telephoto) apertures. The Quad-LED dual-tone flash is also here. The front-facing camera is a 7MP shooter with an f/2.2 aperture. Yes, it’s the same as the iPhone 8 Plus. The video recording capabilities are exactly the same as well. The one thing you don’t get is support for wireless charging. 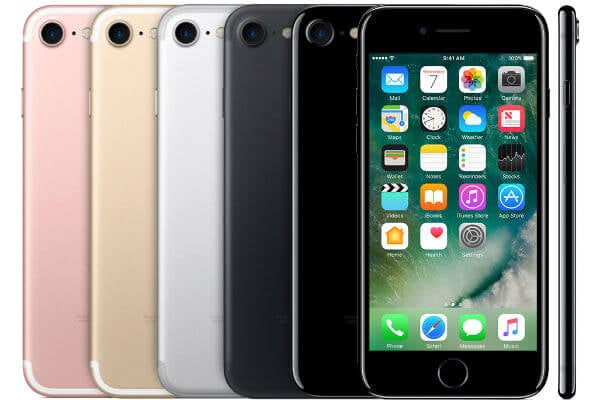 The smaller iPhone 7, like the iPhone 8, doesn’t pack in as much as the bigger sibling but it also doesn’t cost as much. You get the same power as the iPhone 7 plus in a smaller, compact device.

It has a 4.7-inch Retina IPS LCD display with a resolution of 750 x 1334 pixels, a 16:9 aspect ratio, and 326 PPI. It has the same Ion-strengthened glass protection, oleophobic coating, and supports both wide color gamut and 3D Touch. 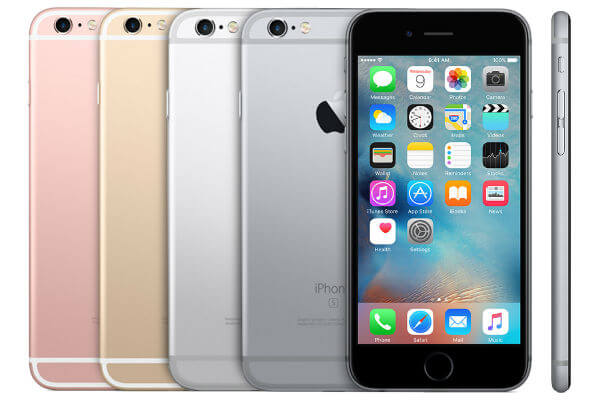 The iPhone 6S Plus is one of the last iPhone models to feature a 3.5mm headphone jack. This is a pretty unique feature on this list and only the iPhone SE below has it. Other than that, you get an older Apple A9 processor and iOS 9 out of the box.

You will be able to upgrade it to iOS 13.3. It’s also one of the last iPhones to ship with 16GB of onboard storage. Other storage variants include 32GB, 64GB, and 128GB. All of these have 2GB of RAM which is not so great in 2019 for multitaskers. However, it doesn’t result in any lag whatsoever.

The display is a 5.5-inch Retina IPS LCD, with the same 1080 x 1920 resolution as all the other Plus models. The 16:9 aspect ratio is also the same as is the pixel density of 401 pixels per inch. The display is protected with Ion-strengthened glass and an oleophobic coating.

The rear camera is a single 12MP shooter with an f/2.2 aperture with the same video recording capabilities as the iPhone 7. On the front, the iPhone 6S Plus features a 5MP camera compared to the 7MP on newer iPhones. It can still record 1080p videos at 30fps. Helping the camera is a Dual-LED dual-tone flash, as opposed to the Quad-LED flash found on newer models. 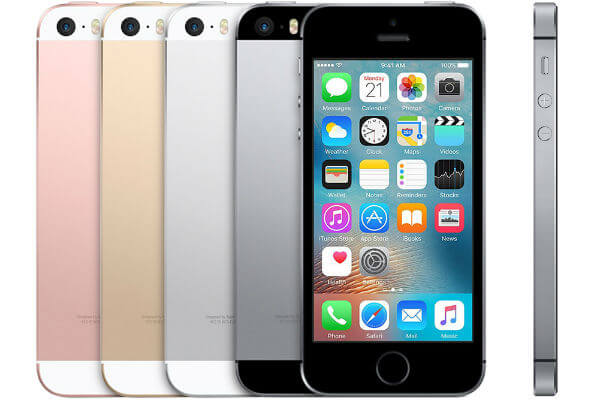 iPhone SE is the last actually small smartphone that still works decently in 2019. If you just need something for iMessage, and some light use, an unlocked iPhone SE is still a great buy.

It was released all the way back is 2016 but the Apple A9 chipset powering this device still works okay in 2019. It won’t compete with the fastest phones, of course, but it is enough to get the job done.

If you need a small iPhone or just a small smartphone, there’s still no competition for the iPhone SE. With a 4.0-inch IPS LCD display, it offers the most comfortable single-hand usage you can get on a smartphone today.

The selfie camera is a mere 1.2MP sensor with an f/2.4 aperture, capable of recording 720p videos at 30fps. It also has a Dual-LED dual-tone flash at the back and yes, it does have the 3.5mm headphone jack.

That was our list of the best-unlocked iPhones you can buy from Amazon right now. If you know Amazon, you know the deals keep changing every day so if you find a great deal, make sure you don’t wait for it to get away because the next one might not necessarily be as good.

How to Measure Current Elevation on iPhone from Anywhere