WiFi analyzer apps are a set of essential tools to troubleshoot WiFi networks. You can check the connections speeds or can be used to find out the blind spots in the WiFi coverage. The WiFi analyzers are available for almost all the platform. This includes Mac, Windows, iPhone, and Andoird. The Analyzer apps can check the signal strength and reduce interference in-home WiFi. We’ll introduce you to leading WiFi analyzer apps for PCs, Macs and mobile phones running Android and iOS.

The smartphone apps are always handy to use and we’ll kick off with Android WiFi Analyzers giving you quick info on your WiFi environment.

Let’s begin with our favorite WiFi analyzer app for Android. WiFi Analyzer by farproc is a comprehensive WiFi analyzer tool. This analyzer app is coming with a variety of useful features. This Android WiFi app has a channel graph to display all the WiFi within the range of the device graphically.

The same channel WiFi signal may overlap each other. If you see the overlapping graphs, then there is a possibility of interference between the WiFi signals. Such interference will result in poor performance and reception of your WiFi signals. You can change your WiFi signal to an unused channel from your router settings. This will avoid teh channle overlaping and lower interference, improve reception and connection speed. There is also an AP list page which lists out the frequency, channels, reception and encryption methods of all WiFi networks in your vicinity. 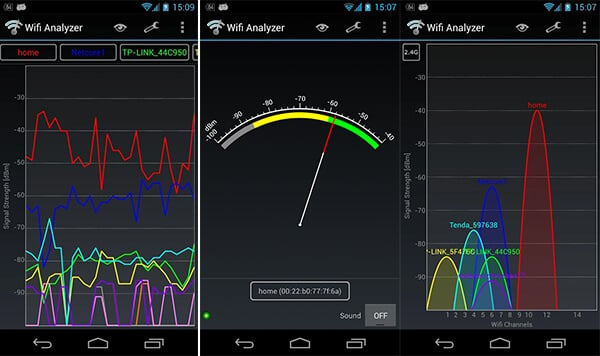 This WiFi app is surely one of the most functional WiFi analyzer apps on the play store. But it does lack the elegance and material design of modern android apps. Though what it may lack there, this analyzer app definitely makes up for in utility. It has a Play Store rating of 4.4 out of 5.

WiFi Analyzer by Zoltán Pallagi is another WiFi analyzer app available in the PlayStore for analyzing WiFi hotspots. This Android app also has almost all the features of the app reviewed before. This Android WiFi Analyser app displays both the link speed. Also, the app can show the AP latency (time delay of the communication between the router and the device). Lower latency translates to better responsiveness in online multiplayer games.

If you are scouting for WiFi networks most suitable for gaming, this app may come in handy.

WiFi Analyzer by Zoltán Pallagi feels much better in the user interface than the wifi Analyzer by farproc. The app also has a Pro version for users who would like to use the app without the hassle of ads.

Network analyzer pro by Techet is our go-to choice for wifi analyzer app in iPhones. This iPhone WiFi app has a wide range of tools. These features are to help users to assess the quality and capability of WiFi networks. This iPhone WiFii analyzer offers a variety of tools including standard diagnostic tools. These tools help to ping, traceroute, in addition to the port scanner, DNS lookup, whois, Internet speed test, etc.

The feature we love the most is the WiFi LAN scanner. It enables users to scan devices connected to the WiFi network the phone is currently connected to. Great to identify any intruders or freeloaders in your network leeching your valuable bandwidth. iOS WiFi Analyzer app can ping the discovered devices to check whether the device is reachable. The WOL (Wake On Lan) function can wake or turn on sleeping devices over WiFi. The WiFi analyzer app also provides Speedtest feature to measure the maximum bandwidth of the network connection. This app is useful to check that your ISP provides the bandwidth it promises. 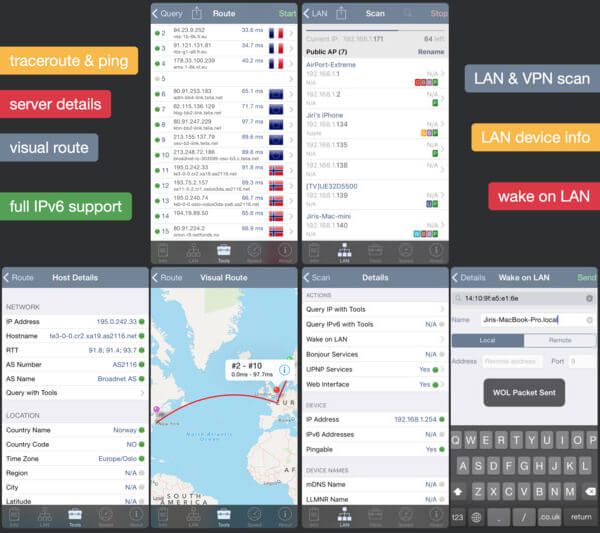 The app has almost all the features you may wish from an analytical standpoint. What’s even more impressive is that it has a really user-friendly interface that even beginner users can effectively utilize. It currently has an App Store rating of 4.7 out of 5.

WiFi Analyzer Network Tools is another WiFi analyzer app for iPhone users. This WiFi app is capable of analyzing WiFi networks. While it doesn’t have all the features of Network analyzer pro by Techet, it’s still a very competent app in itself. This iOS WiFi App shares the DNS Lookup, Port Scanner, Traceroute, Ping, etc.

The WiFi app has WiFi LAN Scanner with Network analyzer pro by Techet. Yet curiously, it seems that this one is priced a little higher than Network Analyzer Pro even though it lacks features when compared with the former. It has an App Store rating of 3.7 out of 5. 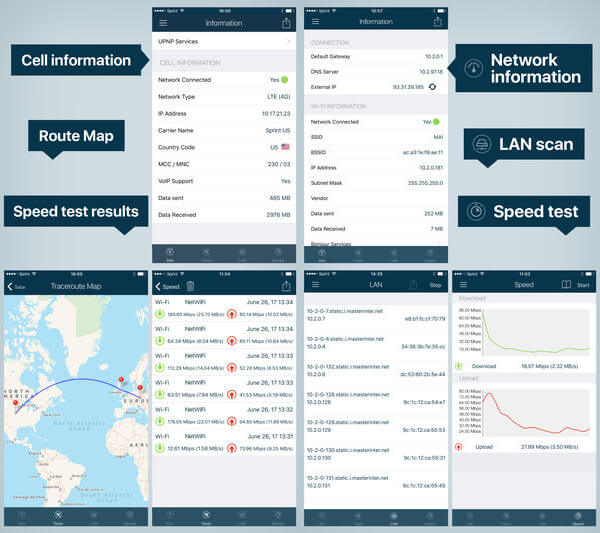 Don’t you have Android or iPhone handy? Well, you can have WiFi analyzers on your PC. The Windows WiFi analyzers are more powerful than a smartphone version. In addition to this, with Windows WiFi Analyser apps, you have more flexibility to keep those results in system or print easily. For Windows users, we’ve listed WiFi analyzer apps below, those are up to the par. Windows store doesn’t seem to offer many choices regarding such apps. If you want to install third party Apps direct from a product website, you may get good featured apps.

WiFi Analyzer by Matt Hafner is an analyzer for Windows operating system. This Windows WiFi app has a channel graph feature showing a channel diagram of all detected WiFi networks around the device. The app also has a feature to find blind spots in your WiFi network. 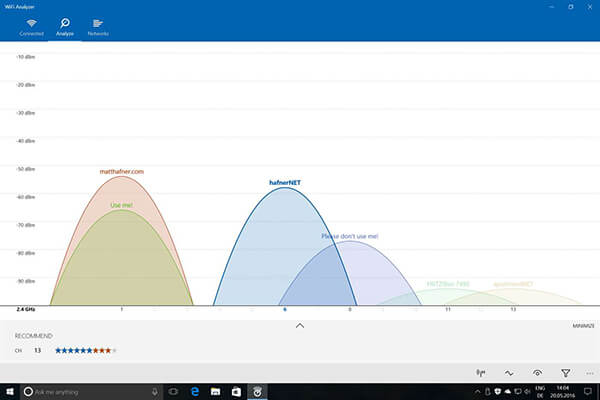 With this WiFi blindspot info, you can rearrange the router to eliminate them. This Windows WiFi tool also lists detailed information about the WiFi network. This includes the frequency, bandwidth, protocol, and channel number. It has a Windows Store rating of 4.4 out of 5.

WiFi Tool – Analyzer & Scanner is another WiFi analyzer app meant for Windows. This WiFi tool has all the features we’ve so far seen in WiFi analyzer apps for Windows. This app has a sleeker design. This app also has ease of use setup. The presence of a dark theme is really useful in dimly-lit environments. The Windows WIFi Analyzer app currently has a Windows Store rating of 4.4 out of 5. 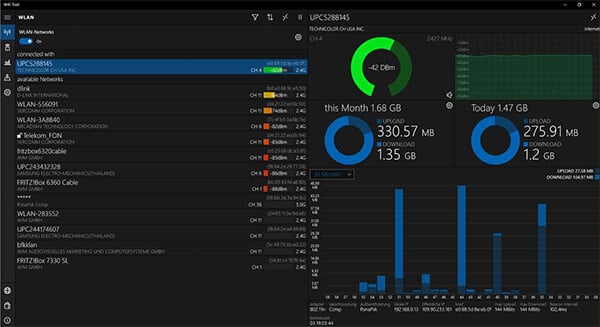 You don’t see may WiFi analyzer apps for mac on App Store. However, we have collected some information about good WiFi Analyser Apps for Mac. Here we’ve gathered apps meant for the Apple Mac ecosystem. There seem to be only a few good WiFi apps in the AppStore, we’ve picked the best!

Now that we’re done with android, windows, and iPhones, let’s move on to Macs. WiFi explorer by Adrian Granados is according to us the best WiFi analyzer app for Mac. This Mac WiFI app has a simple looking yet powerful UI. All the WiFi networks in your vicinity will be listed out in an extremely detailed layout. This allows you to glance at all the relevant information from one screen. It also features a channel graph like most other such apps. 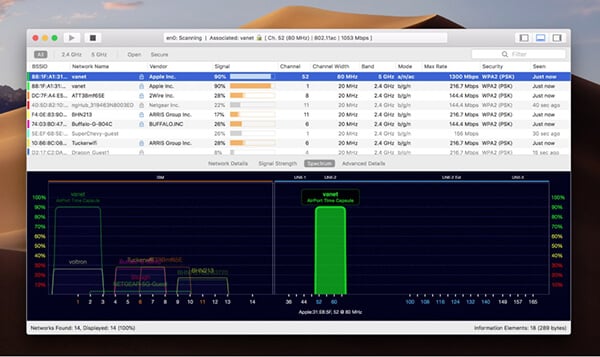 The Mac WiFi Analyser also has a full-screen mode and split view support, adjustable graph timescales. Another distinguishing feature is that you can save the data from the current results for future reference. It has an App Store rating of 4.9 out of 5.

WiFi Scanner by AccessAgility is a fairly user-friendly app, an alternative to WiFi explorer. The layout of the app is very similar to WiFi explorer. This Mac WiFi scanner features a list of all nearby WiFi devices with detailed info on each. It has a WiFi speed testing option to measure the download and upload bandwidth. WiFi scanner can search the WiFi connection for other connected devices. The Mac WiFi Scanner can find the IP address, MAC address and also the device type (router, phone, laptop). This WiFi Mac app can also display wireless connection statistics in the form of graphs like other such apps. It has an App Store rating of 3.3 out of 5. 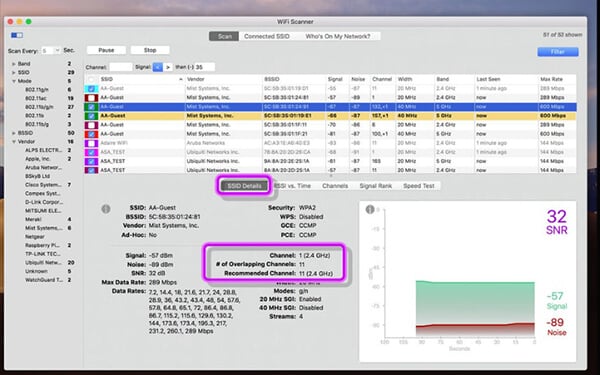 WiFi analyzers are useful tool to identify the issues with your home or office WiFi network. The Analyzers can optimize your WiFi coverage and performance. They can also scan for connected devices to the network. The WiFi analyzers can help you to hunt down unrecognized devices. The WiFi tools listed above are hand-picked by us to be the best for each platform. We hope that you’ll try them out and share your experience in the comment section below.

How to convert your old Android to a Motion Detector Camera?

How to Connect Two AirPods to One Phone and Listen Together

How to Make a Collaborative Playlist on Spotify