Spotify Can Now Show You Full Song Lyrics; Here Is How

Spotify is going through some feature updates in order to improve usability. The music streaming platform is adding more and more features, which the users have been waiting for a long. Now, Spotify has started rolling out the full song lyrics options for users. You can now get the full lyrics of the doing you are listening, from within the app.

Here is how you can get full song lyrics on Spotify.

Get Full Song Lyrics on Spotify in Android and iPhone

Many streaming platforms including Apple Music already have the song lyrics option. This lets the users get the complete lyrics of the song without leaving the app. Apple Music even highlights the line which is playing, helps you follow along with the song easily.

When it came to the Spotify, the streaming platform had been using the “Knowledge cards” from Genius for selected songs. It showed a few lines from song lyrics, and mostly the facts and knowledge about the song playing. Even though it was supposed to attract more users, it did the exact opposite. 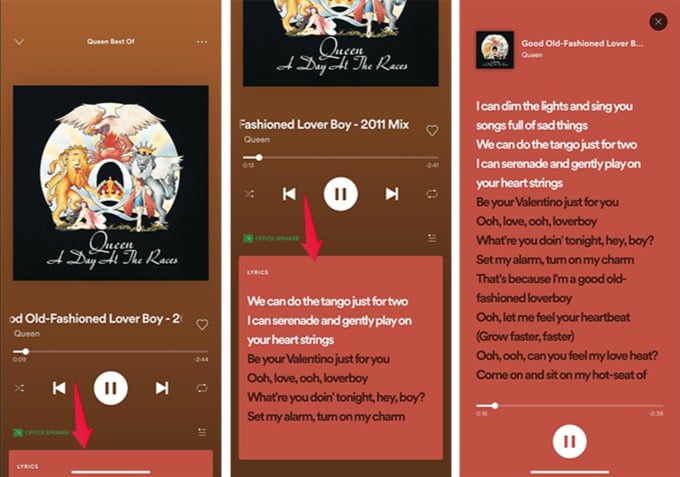 Unfortunately, unlike Apple Music, you cannot jump to a certain line from the lyrics on Spotify.

The Spotify lyrics feature is rolling out to its users worldwide. Spotify free account users can also get the full song lyrics on Android and iPhone. Song lyrics will be hidden when the Spotify Car View is active.

Show Lyrics on Spotify for Windows and Mac

Windows 10 and Mac devices have their own standalone Spotify apps. The Spotify Lyrics is currently rolling out to desktop users as well, after Android and iPhone users. To get full sing lyrics on Spotify on your computer, click on the Microphone icon button on the player control bar, left to the Queue button. 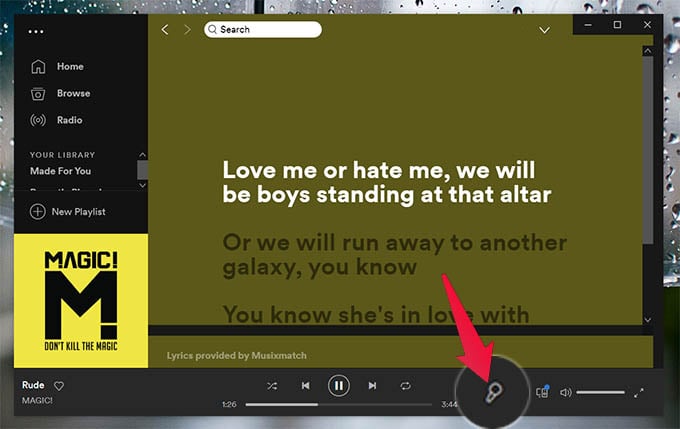 Spotify lyrics is not yet available for Spotify Web player. There is an even lesser chance for that since Spotify limits the Web player for some reason. You can simply get full song lyrics on Spotify with the standalone app on Spotify.

Here are some of your questions answered about the new lyrics feature on Spotify.

Can Everyone Get Spotify Lyrics?

Yes. The Spotify lyrics is available for everyone. If you do not have it, you can wait and the feature will roll-out eventually.

Can Spotify Free Users Get Full Song Lyrics on Spotify?

Absolutely yes. Both the free and premium users of Spotify can have full song lyrics on both Android and iOS apps.

How Does Spotify Lyrics Work?

Get Beautiful Custom Spotify Widgets on Android With These Apps

How to Take a Screenshot on Android Auto

How to Track Friends Using iPhone or Android.

How to Report a Message in Discord DM