The iOS 14 is almost here with some stunning features and major facelifts. You must be eagerly looking forward to trying the latest iOS version update with your iPhone. But wait, does your iPhone support the latest iOS 14 update? Find it here.

We will guide you through the latest iOS 14 update, and you can find all details here.

When Apple released the iOS 13 update last year, several evergreen iPhone models from iPhone 5 and iPhone 6 have been removed. Although, Apple still keeps those devices with iOS 12 updates for major tweaks and security updates. Therefore, there have been many questions raised this year. Mostly, the iPhone 6s users were worries since it was the oldest iPhone model that was compatible with the iOS 13 last year. Will your iPhone or iPod receive iOS 14 and next iOS updates? Find out from the list below. 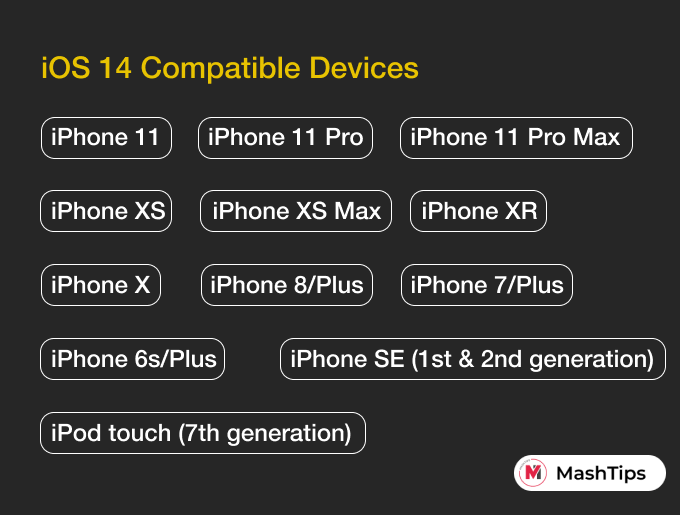 Even though Apple has extended the iOS 14 support to iPhone models back to iPhone 6s and 6s Plus, there is nothing much to hope for next year. Both the iPhone 6s and iPhone 6s Plus are less likely to get iOS 15 updates on 2021.

Things to Do Before Updating to iOS 14

Are you ready to update your iPhone to iOS 14? Here is a checklist that we think should go through before updating your iPhone to the latest iOS update, iOS 14.

Here are some commonly asked questions and troubleshooting tips for installing iOS 14 on your iPhone or iPod.

When is iOS 14 Releasing?

Apple announced the iOS 14 in WWDC 2020. Following the Developer Beta, the iOS 14 Public Beta is available. You can now install the iOS 14 public beta by enrolling in Apple Beta Software Program.

The iOS Beta or iOS 14 Beta by Apple is the pre-released version of the iOS that you can install and test the features on your iPhone even before it is released for public users worldwide. The Beta version of iOS 14 may contain lots of bugs and issues, that might affect your usability. Apple releases the stable version for iOS only after rectifying issues from the Beta version. As of now, only the iOS 14 Developer Beta is out and the public beta will release very soon.

Yes. You can get iOS 14 Beta on your iPhone if you are using a model that supports the latest iOS updates. Go to the Apple Beta Program to enroll your iPhone in the iOS 14 public beta program and then you will get update after installing the profile.

To get the public beta version of iOS 14, visit Apple Beta Software Program and install Beta Profile from the Safari browser on your iPhone. After verifying the profile from Settings, you can check for updates from Settings > General > Software Updates.

If you have a beta profile installed, you can get the update automatically on your iPhone. To install iOS 14 on your iPhone, go to Settings > General > Software Update. If you see the “Download & Install” button with the iOS 14 update, tap on it to start the installation. make sure your iPhone is connected to a stable Wi-Fi connection and is having enough battery charge.

Yes. iPhone 6s users can get iOS 14 updates. But, unfortunately, iPhone 6 users will still not be able to get the latest iOS updates.

What Can I Expect With iOS 14?

As Apple’s one of the biggest software update in an entire year, the iOS 14 sports tons of new features and changes fr the iPhone users. Here are some of the latest additions you will get with iOS 14.

How to Downgrade from iOS 14?

How to Undo Last Activity on iPhone By Tapping Back

How to Setup Legacy Contact for Your Apple ID

How to Enable Check for Sensitive Photos in Kid’s iPhone

How to Schedule WhatsApp Message on iPhone

How to Block Websites on Home WiFi Router?

How to Backup Old Apple Watch and Restore to New Watch

How to Install Adobe Flash Player for Android

How to Run Windows 8 on your iPad