A Complete Guide to Using Microsoft Launcher on Android

Here is a complete guide to get started with Microsoft Launcher on Android.

How to Get Microsoft Launcher on Android?

You can also pick the APK file of the app from third-party websites if the Play Store version is not showing for your region. You can get them from websites like APKMirror. The Microsoft Launcher is no similar to the Windows 10 Home screen Interface on Windows 10 Phones. The company has it exclusively developed for the Android-like environment.

Also Read: 4 Top Android Apps to Make the Most out of your Smartphone

How to Signin to your Microsoft Account from The Launcher?

When you are using the Microsoft Launcher, or even any Microsoft products, it would be greater to sign in using your Microsoft account. If you have a Microsoft Account using on your Windows PC, you can log in using them simply. It will bring many benefits including syncing calendars and to-dos over the in-built Cortana.

Here is a complete guide to logging into the Microsoft Launcher using your Microsoft Account. 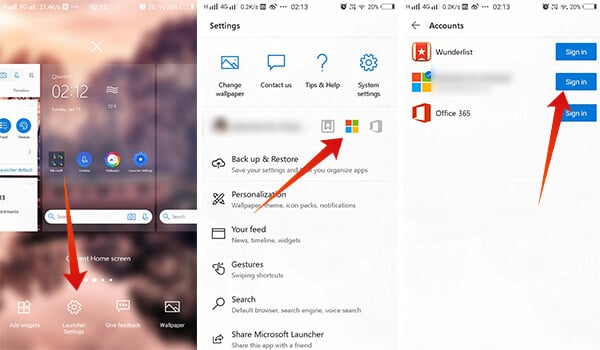 If you skipped this part and using the Microsoft launcher, you can log in using the below method.

How to Change Wallpaper on Microsoft Launcher?

Well, this should not be here, but it is not as same as in every other launcher. So, if you find it difficult to change the wallpaper on the Microsoft Launcher, compared to the stock one, here is how. 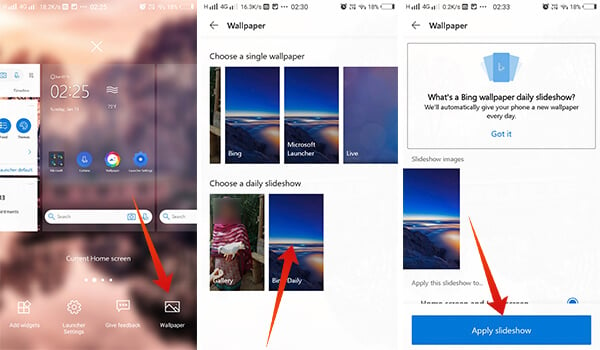 After choosing the wallpaper, you will see the image as your background for the home screen or lock screen (as per your choice).

How to Backup/Restore your Launcher Settings?

Since Microsoft needs you to sign in using your account, it takes advantage of it by backing up your settings. The backup and restore setting preferences over the cloud is very helpful when you reinstall the app. It can be retrieved and reapplied to revert back into old condition in the case of accidental uninstallation. Also, you can migrate the launcher preferences from one smartphone to another using this simple method.

Here is how to backup and restore settings on Microsoft Launcher. 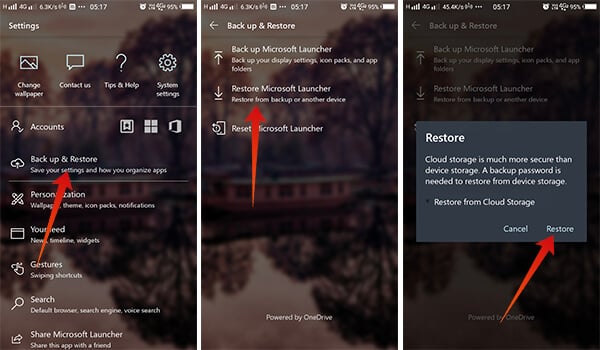 How to Customize your Home Screen?

There you might find many options that you can utilize to customize the entire look of the home screen of your Android UI. The settings will be in effect with the Microsoft Launcher on Android. Here are some of the customization option.

The theme option on the customization window from the Microsoft Launcher settings allow you to choose the default background accent colors. There are mainly three options available – Dark, Light , and Transparent. The Dark mode will add a grey or ash color to the launcher settings window, widgets, and other default elements. Also, you will get solid backgrounds on certain windows. Things are also same with the Light mode. 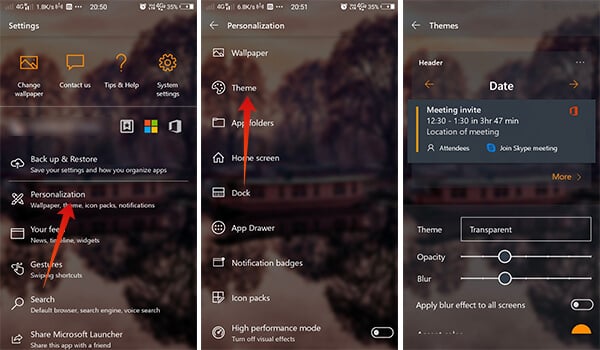 However, if you choose transparent, you could be able to experience the translucent UI feature which is currently on Windows 10 PC Operating System. From the same screen, you can switch the transparency of the window, opacity of the background theme tint, etc. 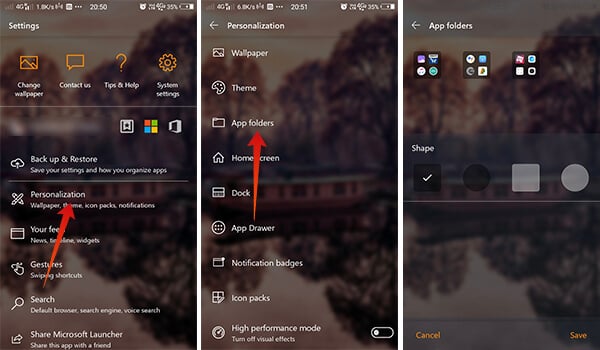 Tapping the App Folders option from the Personalization section, you can easily change the folder preferences for the Microsoft Launcher on Android. You can choose between the app folder shapes and types (rounded square and circle are available).

If you are looking on to changing the layout of your home page, adding more elements and making it entirely different from what it is, you need to enter the Home screen menu. From this, you can do various actions to turn on/off features, set header, and footer, icons, etc. Following are some of the available key options you can use from the Home screen editing menu. 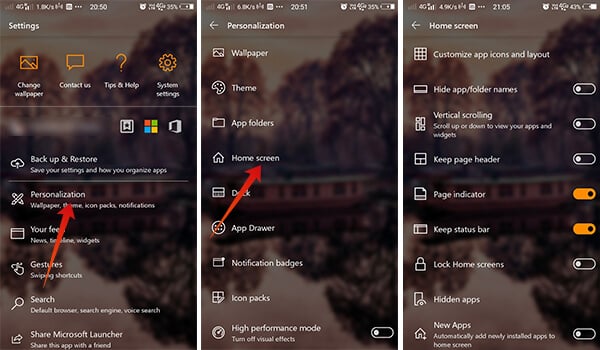 Microsoft Launcher has a main home screen dock section to house important icons such as contacts, messages, etc. You can make customizations into using the Dock section settings. You can also turn off the Dock on your home screen by turning off the toggle button against the Dock option. 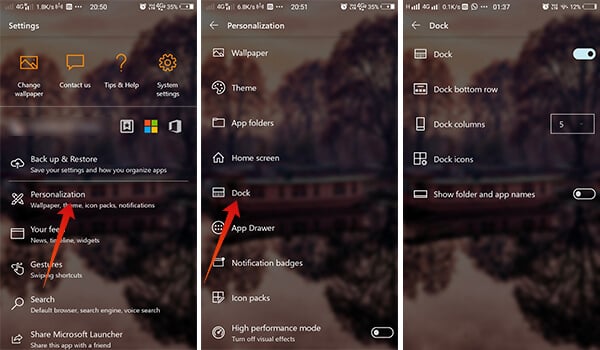 Scrolling down, you can choose the type of things you would like to put on your bottom row dock, and this can be widgets, search bar or apps. The dock columns define the number of apps that will be listed in a row. If you want to change the default dock icons, tap Dock icons option.

How to Turn On Notification Badge?

The notification badge on icons was introduced by many launchers including Nova Launcher years ago. With the new update, Microsoft also supports the same, and you can use the same feature in a similar way. It will show you the dots or badges over the app icon to represent the number of notifications pending. Here is how to turn on Notification Badge on Microsoft Launcher. 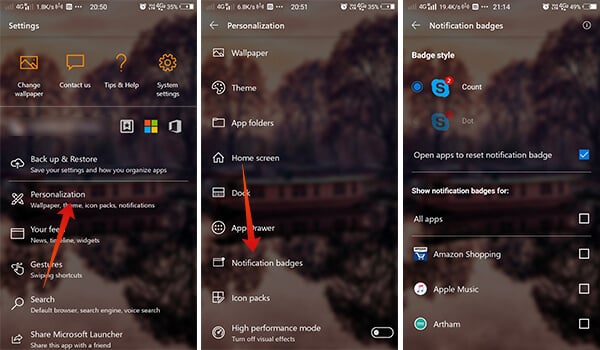 How to Install and Use Custom Icon Packs on Microsoft Launcher?

Like most every other launcher in the market, the Microsoft Launcher also allows third-party app icons. Basically, almost every Android smartphones have a default set of app icons. So, most of them will be in the default form, as the developers provide with the stock. Therefore, if you want to change the icon option, you will need to change the default launcher app.

After installing, the Launcher will restart and the changes in reflect immediately.

How to Use Launcher Gestures?

Some Android smartphone manufacturers add several stock gestures on to their smartphones, which are specifically for the models only. So, not every Android smartphone users cannot have the same or similar gestures on their devices. In the meantime, the Microsoft Launcher provides various gesture features that let you do numerous actions. The following steps are to guide you through enabling the in-launcher gesture features. 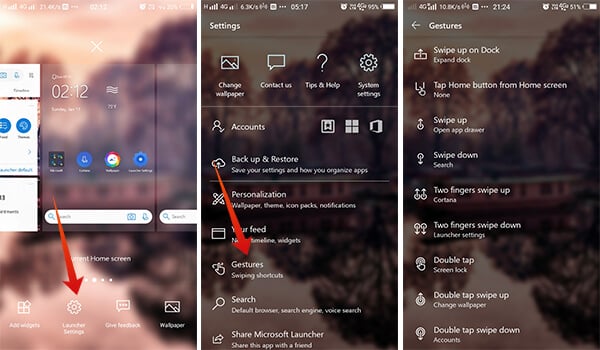 On the window, you could see a set of gestures like swipe up, swipe down, double tap, two fingers tap, etc. Tap each of them and set the appropriate actions you need to do.

How to Use the Activity Timeline on Microsoft Launcher?

You must be familiar with the usage timeline feature if you are an active Windows 20 user. Microsoft has included the feature with last year’s update for Windows 10 PC users. It allows you to check your usage timeline and scroll through the previous versions of each app interface you have been. So, you can even open files you opened lately, examine app usage, etc.

Incase of Microsoft Launcher, Microsoft is directly implementing the same on to the launcher app. You need to provide the app with accessibility permission and it will record and show you the timeline for the entire day. 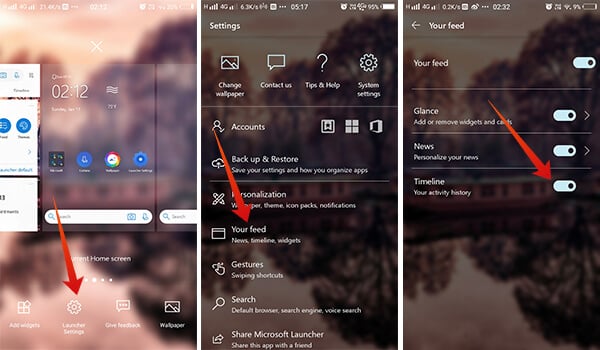 You can access the timeline from the Feed, by scrolling from left to right on the home screen. There you could find the previous activities under the Timeline tab.

How to Keep Track of your Smartphone Usage with Microsoft Launcher?

Have you ever through to keeping track of your smartphone usage with some native-like options? Well, Google recently released the Digital Wellbeing for the Android Pie smartphone users. Since there is no alternative method for the older versions, you can make use of the Microsoft Launcher’s Screen time feature. It is also a part of the Feed window, like the Timeline. 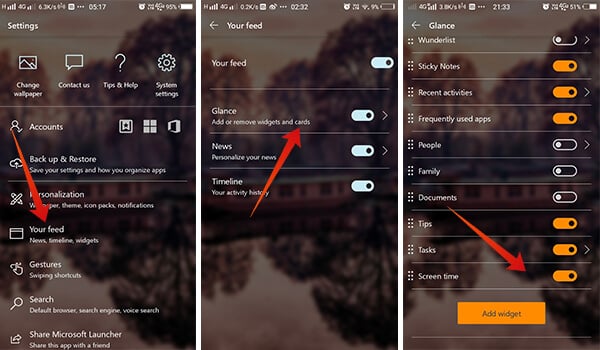 You are all set, and you can find the screen on time from the Glance tab on Feed window.

How to Use In-built Cortana Voice Assistant in Microsoft Launcher? 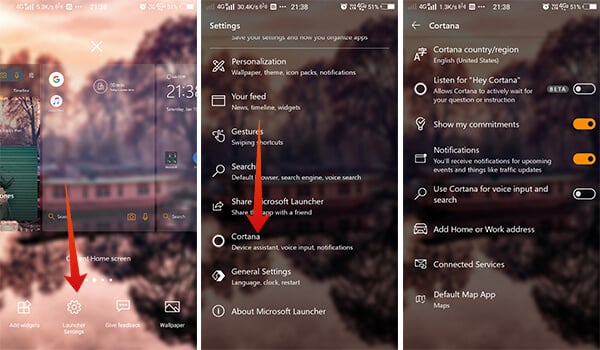 Now you are good to go with the inbuilt Cortana service based on Microsoft Launcher on Android.

See, if you have gone through every tutorial mentioned above, you have almost covered every aspect of the Microsoft Launcher. Despite that, in case you get the most out of the launcher, here are some quick tips you can go with.

How to Reset the Changes on Microsoft Launcher?

One of the major advancements of the Android launchers is their customizability. The same can be done with the Microsoft Launcher and you can even make it far great away from the stock version of the UI. However, at some point somehow, if you do something wrong, it becomes difficult to reorder things back. But there is a reset button on the Microsoft Launcher. So, you can revert back to the normal UI design, from what you changed. 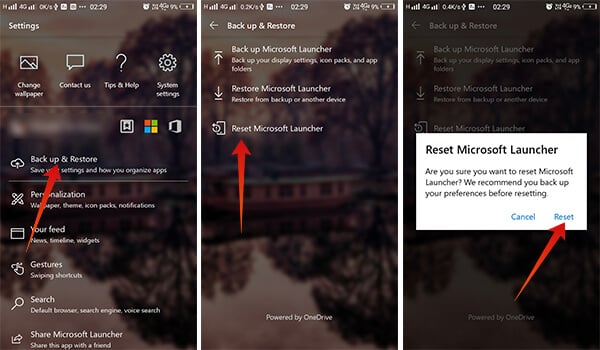 If you are already using another launcher for the purpose, it is the right time to give the Microsoft Launcher a try.