Amrit Pandey
Last Updated: October 11, 2019
MashTips is supported by its audience. When you purchase through links on our site, we may earn an affiliate commission at no extra cost to you.
Facebook
Twitter
Pinterest
WhatsApp
Telegram

Here we listed some basic Mac screen recorder software for free and a couple of paid recorder apps that has some extended features best for professional use.

When you go for Mac free screen recorder, please keep in mind, many of them will come with time-limited recording, or some features will be missing. But these apps will be a good choice for those who don’t want to spend money.

Mac users know that Quick Time Player is the default video player on Mac. QuickTime can also be used for the playing different media files present on the system and support a wide range of video formats. Despite being a video player it can also perform screen recording software easily and you can choose the entire desktop or the selected area for recording. There is an optional feature to show the mouse and add microphone audio in the recording video.

Monosnap is a free Mac screen recording software coming with the option of turning on your webcam, mic and system’s audio all before the recording. You can your Mac’s inbuilt camera or an external camera for the recordings on the software. MonoSnap records the screen in 60fps to ensure an ultra-smooth playback to meet the need in the demanding situations. For screenshots, Monosnap can capture full or part of the screen delayed screen capture and hotkey setup to trigger the screenshot. 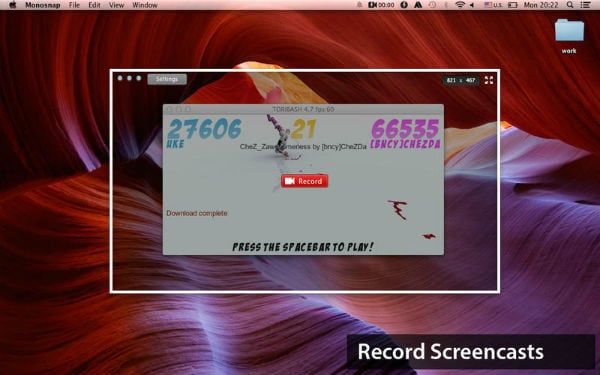 The video recording support to capture screencasts, blur private information from the screen and also let you highlight the important information with text, marker or arrows. This Mac Screen Recorder is ideal for students and professionals with its integration with the cloud. You can connect the cloud drives such as Dropbox, CloudApp, Yandex.Disk, Box.com, Google Drive or FTPs to upload screen recorded videos and screenshots to share with other PCs and smartphones. Monosnap is mainly good for one-off recordings that are short and can be shared quickly.

You can easily use Icecream Screen Recorder to capture any area of the screen. Capture as well as save the area in the form of a screenshot or video file over your system. Record your games, webinars and Skype video calls in HD quality in a quick and simple manner.

Record the screen in a window as well as in full-screen mode to display the content in the best possible manner. You can easily add your own watermark while capturing the screen of your desktop or laptop. Set your video quality output and record the entire screen in that manner.

OBS Studio is an open source and free software for video recording and live streaming for Windows, MAC & Linux. You can get high-performance real-time video/audio capturing and mixing, with unlimited scenes. The additional filters available for video sources such as image masking, color correction, chroma/color keying, and more. The built-in audio mixer is coming with filter functions such as noise gate, noise suppression, and gain.

Jing is an interesting free screen capture application from TechSmith, different from all other screen-capture software. The captured video can be saved in SWF format or stored in the screencast. Coming with a five-minute video recording with the option of using the mic while recording, it is a good option for narrating the steps to solve a problem.

This is one of the simplest tool presents for screencasting and edits the recorded video to perfection. Unlike many free recording tools it doesn’t include any watermark on the video and every mouse click can be detected easily with the tool. The videos recorded through the tool can be a minimum of 200 seconds and maximum of 600 seconds. You can record over and over then edit the video to make a big video.

Recordit allows you to make a quick video of yourself doing something interesting on your Mac. You can easily turn the recorded video into a GIF and share them instantly without any trouble encountered. From the software, you can record the screen for 5 minutes and create a GIF from the recorded video. The screencast is uploaded to the software’s servers from where it can be shared to other platforms.

Apowersoft Screen Recorder is a great professional tool for screen recording. The program is quite rich in features and gives more control to the user during the screen recording process. Create a vivid tutorial that includes your feelings along with the recording.

Record in the best possible manner with the three recording modes as well as use different audio inputs for recording. Configure the mouse style for recording the screen in the manner that you find suitable for yourself.

Record it is a good and professional tool that allows you to record your screen for displaying the software as well as giving video tutorials. You can capture the screen for iOS devices with the tool through Airplay / Wi-Fi. Access the custom recorder feature of the tool to capture the videos at full screen or any size.

As you know, the paid Mac screen recorder apps are good for customer support and packed with a lot of features as well as no restriction for maximum recording time.

Another great Mac screen recording software from TechSmith, Snagit is premium screen recorder software which can download at a one-time cost of $49.95. Combining some of the best editing features; it is an easy to use software to record desktop. 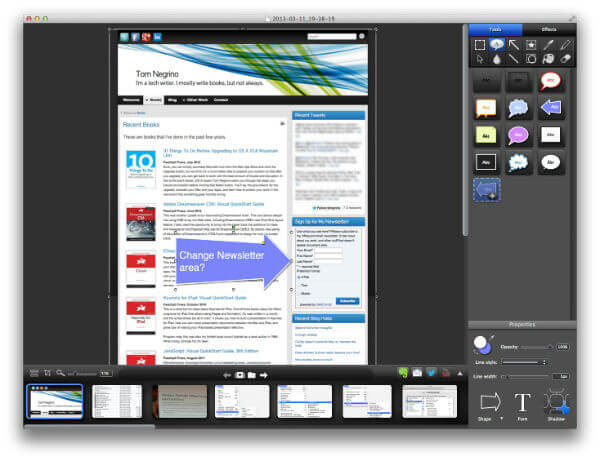 The recorded video is saved in MP4 format and comes with a large 1 GB file limit. After doing the recording, you can send the video to any suitable application service offering a great level of reliability.

Camtasia 2 is one of the most famous and professional screen recording software for Mac OS and is offered for a price of $99. With the extensive layout, the user can make smooth editing and mix on the recorded video. 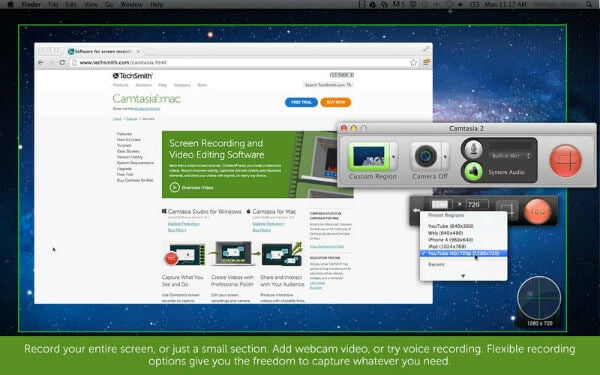 Add titles, annotations, transitions and panning animations on the recorded movie to increase the effect of the video. The tools of the software are huge time savers for the people who record screen regularly.

It is a professional screen recording software that can be purchased for $4.99. Screen Record Studio supplies some good text and image logos along with a screen recording feature. The people can mix two audio sources and add mouse click animation along with the click count. You can record for a particular time by setting a timer for recording. The software can only record for only 120 seconds.

AV Recorder & Screen Capture allows you to capture everything and anything on your screen. It offers a max resolution of 2800 by 1800 for recording video. Make gameplay tutorial with its perfect FPS option and auto stop recording at a fixed time. If you want to shorten the recording then you can trim the video easily from the software. The recording software is offered to people at a cost of $9.99. The sharing of videos can be done online with ease.

Bring out the creativity present in you by capturing informative and compelling videos with Capto Screen Capture. Record your entire screen or selected portions in Full HD at 60 FPS with clear audio. You can also record your emotions during the screen recording process with system’s camera or through an external recording device.

The powerful video editing suite of the tool gives you all the features to make the recorded video better. The file manager of the tool offers easy storage as well as retrieval of the projects. Just sort the recorded videos in efficiently labeled folders that are customizable in every manner.

Get the unique possibility for capturing the screen in high quality with Movavi Screen Recorder. You can easily capture the gameplay, video as well as audio streams through the tool available for the purpose. Capture the movement of the mouse along with the keyboard actions for recording a tutorial or how to do video in a better way.

Coming with automatic monitor area, the recorder can be adjusted into any specific manner preferred by you. You can add system alerts, keyboard types, cursors types as well as custom sounds on clicks. The tool also comes with a timer allowing you to add a timer and relax on your chair, while recording is going on its own.

Record the screen of your Mac at 30 frames to 60 frames per second with optimum performance result through Screen Recorder Pro. Choose to record the computer audio or record it from the internet, app or any game. With custom scaling, you can easily scale down the recorded video to get the necessary result in the video.

Compress the video after the recording process to make it small for uploading on social networking sites. Record the screen with no time limit and save the file in MOV or MP4 format. With the tool, you can add mouse click animation with your logo as well as your signature to the recorded video.

Perhaps the most prominent use of Mac Screen Recording Software is for showing off the solution to a system problem and upload on Youtube. When you use the screen recorder software for Mac, rather than just recording the screen, you may have a bunch of features that will improve the productivity.

With these top pick Mac Screen Recorder software, you can easily make screencast videos, make tutorials more explanative and clear. You can choose the best screen recorder from the paid or free ones in order to have the features as well as the characteristics needed to make a great tutorial video.

How to Check RAM on Mac

Unlike Windows PCs or Laptops, the Memory modules on most MacBooks and iMac are not replaceable or upgradable in an easy way. The company...
Read more
Mac

How to Make Mac Dark Mode Enabled on MacOS

Apple brought loads of appearance changes to the macOS, and the Mac Dark Mode is one among them. Introduced in macOS Mojave, the Dark...
Read more
Mac

How to Check Battery Health on MacBook

Batteries on electronic devices have a very limited period of usage capacity. Your MacBook Pro Battery life can go down gradually after a certain...
Read more