How to Stop People from Adding You to WhatsApp Groups

WhatsApp has been the most popular messenger platform for a long while now. Despite trying hard, Facebook Messenger is still behind, even though it has closed the gap considerably. This is despite some very annoying aspects of WhatsApp. One of them is how anyone can add you to any number of groups you don’t want to be in.

WhatsApp has made amends though and you can stop people from adding you to WhatsApp groups. This can be done via the WhatsApp groups Privacy Settings.

Stop People From Adding You to WhatsApp Groups

The new WhatsApp privacy settings for groups has been there for a few months now, although not many people seem to have noticed. This week, WhatsApp changed a small thing about this. Previously, My contacts except. were simply Nobody instead. There are only a few steps you need to do to avoid people from adding you to WhatsApp Groups.

How to Block a WhatsApp Group from Adding your Number

Admins who can’t add you to WhatsApp groups will be allowed to send you an invite via the private chat. You have 3 days to respond to the invitation after which it will expire. This is good enough to stop those that keep creating groups randomly and adding everyone they know. 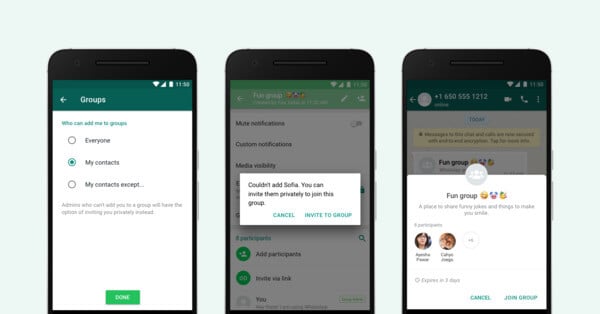 But it’s not hard to imagine how things could get awkward if you don’t accept an invite from someone like your friend, or family, who you’re close with but still don’t want to be a part of their WhatsApp group.

If you’ve been a user, you are surely no stranger to being added to random groups that you don’t want to be a part of. It could be a family group, it could be a group of sexist friends, or it could just be a random group with a ton of people you don’t even know. Like every annoying WhatsApp thing, the Facebook-owned company finally, after a long wait, decided to address the issue. They introduced some new privacy settings in WhatsApp, specific to groups.

Are the new privacy settings enough for you? Do you think WhatsApp could do something more? Sound off in the comments below.

How to Make Table of Contents in Google Docs

How to Ungroup and Separate Taskbar Icons on Windows 11

How to Get Memoji Watch Face on Your Apple Watch

7 Best Shopping Apps that Earn Money for You.

Now ‘Visit’ Any City in 3D Using These iPhone Tricks