Have you ever thought of using Siri to increase your productivity? Not yet? Then, you need to think about that. Because Siri can do more meaningful tasks than answering your funny questions. Do you know? Apple had allowed the integration of Siri with third-party apps on the iOS 10 itself. With iOS 12, now you can easily integrate Siri with the Shortcuts app as well. Siri is all set to function as a full-fledged virtual assistant to you. Let’s see on what ways Siri will help you with your daily living.

Siri (also known as Apple Siri) is nothing but a voice-based virtual assistant which is available on iOS devices like iPhone, iPad, Apple Watch etc. MacOS also supports Siri. Like a personal assistant, it can be used to answer questions, search something on your device, make calls and much more. The list is endless as it varies based on the needs of the individual. Recently, Google has updated its Assistant app to extend support for Siri Shortcuts. Now, Siri can talk to Google Assistant as well.

How to Turn On Siri?

First, you need to turn on Siri to get help from her. For that, you can try out any of the following options:

How to Change Siri Settings?

Before jumping to the Siri commands, let’s take a look at the various settings related to Siri on your iPhone. By default, Siri is enabled and you can tell your command by long pressing the Home button. 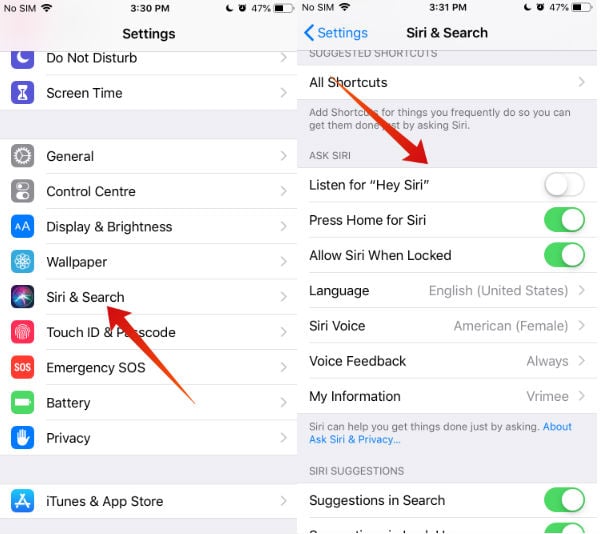 If you would like to use “Hey Siri”, then you need to turn on Settings->Siri & Search->Listen for “Hey Siri“. Once you turn on that option, iOS will prompt you to record the phrase “Hey Siri” in your voice so that it can identify whenever you say that phrase.

Siri is available in more than 20+ languages including French, Spanish, German, Chinese, and more. To set the language, navigate to Settings->Siri & Search->Language and tap your desired language. If you are changing the language, then you need to re-record the Hey Siri phrase again.

iOS allows you to configure the accent and gender of the voice used by Siri. Currently, it supports American, Australian, British, Irish and South African accent. Just navigate to Settings->Siri & Search->Siri Voice to set the values for accent and gender.

If enabled, Siri will suggest websites before you complete your search query. To enable/disable the Siri Suggestions on Lock Screen, Search or Look Up, navigate to Settings-> Siri & Search and toggle the options based on your need.

Do you want to find out in what kind of ways Siri can help you? Pretty Simple. Just activate Siri either using the home button or Hey Siri. Then, wait for few seconds without uttering any word. Your screen will display the title “Some things you can ask me:”. Below that, you will find a bunch of Siri Commands related to various iOS apps like Calendar, Messages, FaceTime, Photos, Camera, Maps and more.

The list of Siri Commands is endless. Because every individual will be using Siri for different reasons. For example, one person might ask Siri to send a message on WhatsApp while another person will command Siri to play his favorite music. The below list is created just to show how Siri Commands can help to increase your productivity and save some time on your hectic daily work schedule. 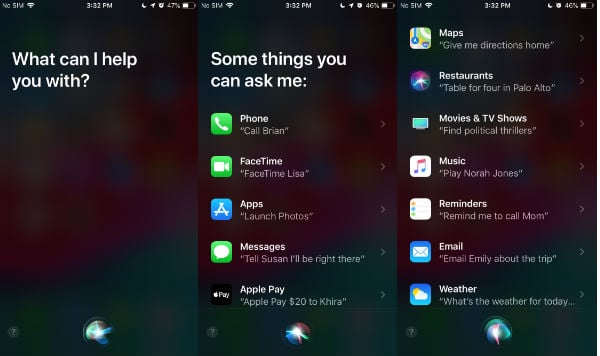 Definitely, it is not safe to use your iPhone to make/answer calls or send messages while driving. The best option is to enable the Do Not Disturb Mode while you are on the roads so that your concentration will not be disturbed. However, there might be some occasions where you need to make a call. Instead of keeping your iPhone in one hand and steering wheel on the other, you can ask Siri to make the call by saying “Call X” where X is the name of the contact. Or even you can ask “Redial that last number” in case you need to call back someone.

Have you started for a long drive and forgot to check the weather for the day? No need to panic. And, don’t try to fiddle with your iPhone by searching for the weather forecast. Instead, you can just ask Siri something like “What’s the weather like today?”, “How windy is it out there”, “Will it rain today” or anything you would like to know about the weather.

Have you ever thought of using Siri to create your shopping list or to set location-based reminders? Then, you need to try that. You can say things like “Remind me to call mom on Skype when I get home”, “Add bread to my shopping list”, “Create a new list called Christmas Shopping” or anything you need. Then, Siri will add all the tasks to the Reminders app and will remind you of the task.

Do you have trouble finding the photo you need from thousands of images in your Gallery? Not anymore. With iOS 12, you can easily search for photos by location, category, date and more. If you feel bit lazy, then you can just ask Siri to search for the photos by saying commands like “Find my Niagara Trip last month”, “Memories from the Madam Tussauds Museum”, “Search for my selfies at Grand Canyon” and more. Do remember that the photo search will work only if the location services are enabled at the time of capturing images.

Irrespective of whether you would like to take a short nap of a couple of hours or a regular sleep of 8 hours, Siri will help you to set alarms without tapping any button. Just launch Siri and say something like “Wake me up in another 1 hour”, “Turn off all my alarms”, “Set an alarm for 5.00 am”, “Change my 5.30 alarm to 5.45” and more. Besides alarm, you can also ask Siri to set timers or to know the time in various parts of the world. Like you can just say “Time in London”, “Time in California” etc instead of searching the time in Safari or Chrome.

Related Read: How to Get Most Out of Google Clock App?

Is your iPhone is overloaded with hundreds of apps? Then, definitely, you will find it hard to search and open the app you want quickly. Don’t worry. Just ask Siri “Launch X” where X is the name of the app. Do you know? Siri can help you only to launch an app. Unfortunately, you cannot make Siri close the app. (When I tried that, it displayed the message swipe on the app’s preview to close it)

This command will be really helpful while you are driving on the roads. Siri will help you to read/reply to messages on WhatsApp, Facebook, iMessage and more. Of course, you can ask her to check your emails and respond to the important ones by dictating the reply. You can say commands like “Send a message to Mary”, “Text Alex and Ray where are you”, “Tell her I’ll be there in 15 minutes”, “Reply Thanks a lot” and more. Even you can tell Siri to search for messages with a command like “Read my last message from May”.

Related: How to Enable iPhone Do Not Disturb Auto Reply Text While Driving?

Most of us will be using either Google Maps or Apple Maps to find the driving route for any destination. While driving, you might expect some delays due to traffic or bad weather. Hence, you can ask Siri like “What’s my ETA?”, “How is the traffic around Richmond”, “What’s my next turn”, “Find a gas station” etc. To get the driving routes for the regular locations like workplace, school or home, you can just say “Directions to Home”, “Directions to School”.

For long road trips, hearing music will help to reduce the strain. Right? However, it is not recommended to fiddle with your iPhone to change the songs while you are driving. Instead, you can get the help of Siri to make your life easier. Just tell Siri “Play XYZ” where XYZ is the first few words of the song or album title. Or you can say “Shuffle my road trip playlist” if you have created a playlist for your long drives.

Read the post on how to use Shortcuts on iPhone. (to be linked)

What’s your most used Siri command? How Siri helps you to make things easier? Please share your comments.