How to Activate Siri on iPhone

Do you own an Apple device like iPhone, iPad or Mac? Then, you must definitely have heard about Siri. Siri is Apple’s virtual assistant helps you to do a lot of things like playing your favorite movie/TV show, sending a message to someone while driving, get directions for a location and much more. You can do all the above things just by saying a voice command to Siri. Pretty cool? In this post, let’s see how to set up and use Siri on your iPhone or iPad.

Editor’s Note: The steps and the images shown on this post are taken using iPhone 6 with iOS 12.

How to Use Siri on iPhone

Siri was originally developed by SRI International Artificial Intelligence Center and released as a stand-alone app. Later, Apple bought the Siri app and integrated the same into iPhone 4S in 2011. Since then, a lot of new features and improvements have been made by Apple to make Siri as an efficient personal assistant for the users of Apple’s devices.

You can make use of Siri to do some actions (eg. Call Home), get answers for your questions (eg. Hey Siri, What time is it in Los Angeles) or something else. Since there is no restriction on the kind of questions that can be asked to Siri, you can ask anything you like. For example, you can simply ask Siri to check the battery level of your AirPod. However, the only thing you need to remember is that if your command is not meaningful, then you will get an irrelevant answer.

To use Siri on the iPhone, you need to do two things: Activate Siri, Say Siri command. We have already published a post which lists the most frequently used Siri Voice commands for iOS which will be handy for beginners. Now, let’s see how to activate Siri on your iPhone.

Related: How to Set up Siri Shortcuts on Waze to Navigate with iPhone

How to Turn On Siri on iPhone

While you are setting up your iPhone, iPad for the first time, iOS will ask whether to enable Siri or not. If you had selected the option ‘Yes’, then Siri will get activated once you finish setting up your device. Otherwise, you can activate Siri on your iPhone by following the below steps: 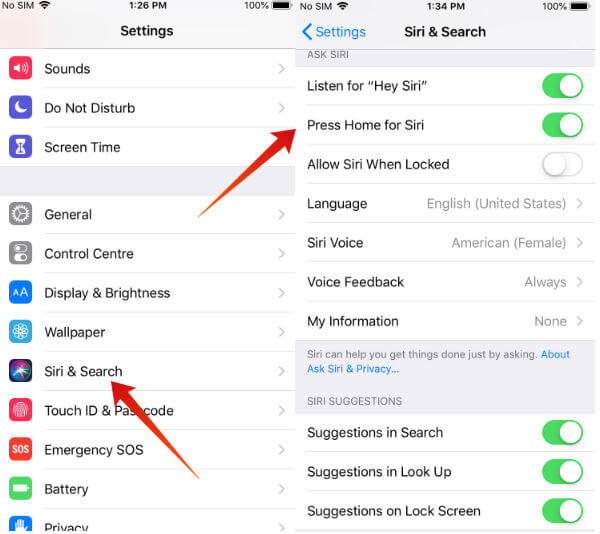 Now, if you would like to launch Siri, just press and hold the Home button on your iPhone. (If you are using iPhone X or other recent models, then you need to press the Side button to launch Siri). Then, go ahead to tap the Microphone icon and say your voice command to get the help of Siri.

How to Set up ‘Hey Siri’

Do you find it boring to press the Home button every time you need to launch Siri? Fortunately, there is an easy option to call Siri by using your voice. Follow the steps listed below to enable or set up Hey Siri on your device. 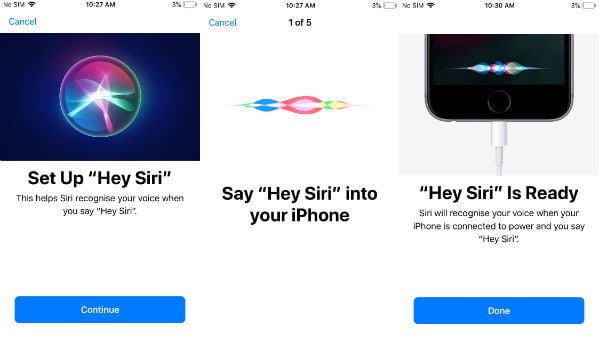 Now, whenever you need to call Siri, just say ‘Hey Siri’. Then, Siri will be launched immediately to help you. Since the iOS recognizes your voice, it prevents strangers from accessing your device by saying Hey Siri command.

Even though Hey Siri is a cool feature, you cannot utilize that fully if you have an older iPhone. Because of this, the Hey Siri option will only work if the device is connected to power for all devices older than an iPhone 6S. To know the list of devices that support Hey Siri hands-free (without plugged in), check out the Apple website.

How to Secure “Hey Siri”

No doubt, Siri can help you to do things quickly. However, you need to secure Siri so that no one else can use her to get personal information from your device without getting your consent. The best option to prevent a stranger from misusing Hey Siri feature is to disable that when your device is locked.

To do that, navigate to Settings->Siri & Search and make sure that the setting Allow Siri When Locked is turned OFF. Then, Hey Siri will work only if your device is unlocked.

How to Customize Siri

Besides English, Siri is also available in other languages like Spanish, French, German, Chinese and more. To set your desired language, navigate to Settings->Siri & Search->Language. Additionally, you can customize not only the accent of Siri but also its gender (male/female). Siri Voice is available in the following accents: American, Australian, British, Irish, South African. 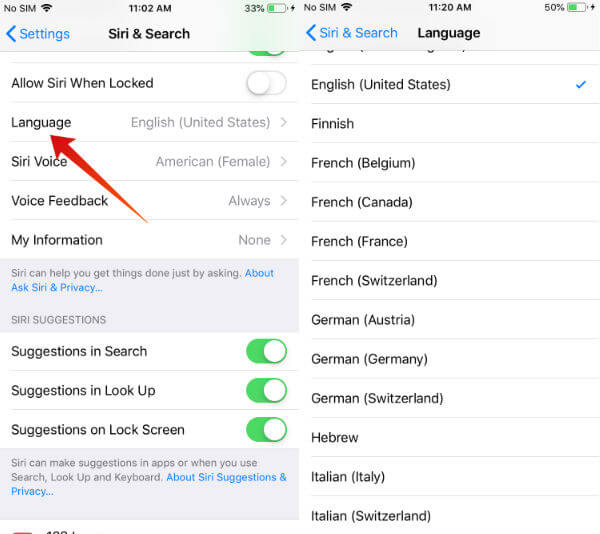 For some reason, if ‘Hey Siri’ or Siri is not working on your iPhone, then try out one or more of the following troubleshooting steps:

Now you know how to activate Siri on your iPhone. Siri is one of the built-in voice assistants that can be used to control the Apple devices including Mac, AirPod, iPhone, and even in CarPlay. You can save a lot of time by doing things through the voice command rather than navigating through the iPhone screen to do a job.