HomeMobileAndroidApple Headphone is Not Working on Android, PC, or PS4 (Solved)

Apple Headphone is Not Working on Android, PC, or PS4 (Solved)

Your brand new headset controls or Mic is not working on an Android device? Does your Android headset not working with Mac or iPhone? Windows phone owners may also experience the same issue with Apple headphones. For Android or Apple headphone owners who are facing these weird compatibility issues with headphones and your smartphone, please read the solution here. This article will answer your question, why is your iPhone headset not working on Android or vice versa.

First of all, please be aware that this is neither an issue with your headphones nor smartphone. Apple has a different design standard for its headphones, and that design is not based on the universal headphone design (like Android headphones) and that is why Apple headphones are not 100% compatible with other non-Apple smartphones and devices.

What are CTIA and OMTP Standards?

There are two different standards are using with the 3.5mm TRRS headset wiring configuration. The most widely used one is the Open Mobile Terminal Platform (OMTP) standard that is used with old Android phones, Nokia devices, laptops, etc. The Ground pin is connected next to the headset sleeve in this OMTP standard.

The new standard one is American Headset Jack (AJH) or called Cellular Telecommunications Industry Association (CTIA). The Microphone point is next to the sleeve end on these headsets and the Ground pin is placed between Microphone and Right Earpiece Pins.

The AHJ standard is used by Apple headsets, latest LG and Samsung phones. Technically, if you use an AHJ headphone to an OMTP device, the Microphone will not work and maybe the headphone controllers may not respond as expected.

In Android and Apple world there are two different types of headsets are using to connect to the phones. Let me make it clear, Android phones are still following the standard headphone wiring format (CTIA) for their headphone PINs. However, Apple has been adopted a different configuration (OMTP) with their headphones and obviously, that is not compatible with other devices.

All the new smartphones are using the headset with TRRS (Tip, Ring, Ring, Sleeve) configuration. These configuration is using for headphones that have an attached microphone and a radio push-to-transmit (or push-to-talk) feature. Almost all of the Android phones are using this standard headset configuration. In this TRRS configuration, each tip, ring and sleeve component has its own wire terminal counterpart inside the housing with a pin-out in the order of Left Audio, Right Audio, Mic, and Ground. 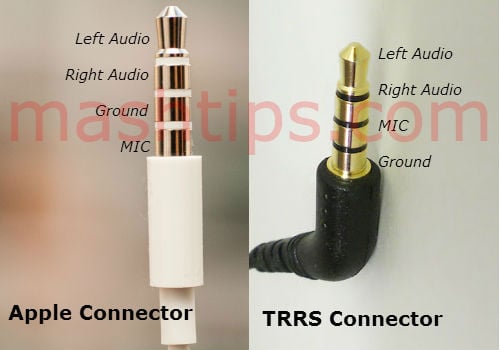 Apple and other smartphone manufacturers are using this same standard for their headsets. However, Apple made a slight change in its wiring configuration. Apple is changed its headphone pin-out order to Left Audio, Right Audio, Ground, Mic that is different from the standard (TRRS) pinout configuration Left Audio, Right Audio, Mic, Ground. This wire configuration makes Apple headphones to work with only Apple devices (all the features) like the iPhone, iPad and other Apple products.

Can we Interchange the Headset Wires to Match Apple Headphone Configuration?

What will happen if you change or alter the wires of MIC and Ground? Can you use this altered headset with your Android phone? Personally, I wouldn’t recommend that, because Apple’s headset has another minor change compare to other standard headphones.

This Apple headset has specific resistance set between the MIC and Ground cable to create pulses for headset control buttons. This resistor set value is different than the standard headset.

Hence, this different value of the resistor, when you use other smartphones with modified Apple headphones, you may not get the same signal amplitude and this may cause to malfunction the headphone controls.

When you press these buttons, Apple device sensing the electrical pulse with a definite amplitude (based on the internal resistance) and converting to the command codes to control the iPhone, iPad or similar Apple devices. These pulses’ amplitude and timing is not compatible with other Smartphone or devices and may not able to control your Android or Nokia phone with these same headset controls.

How to Make iPhone Headset Compatible with Android or Vice Versa?

There are a couple of workarounds you can try out to make compatible the headphone with your Android. However, these solutions are not going to solve your problem 100%. Those who are interested to find a solution, go through a few of those, and you can pick the best one.

Those who are really like the Apple earbud design, and still want to use with their Android phone, there are plenty of third-party headsets are available in the market imitating the same design of Apple, but come with Bluetooth connectivity.

Since the connection is made through Bluetooth, the controls are going to be compatible with both iPhone and Android devices. The Yostyle Wireless Headphones is coming with V4.1 Stereo Earphones and  Noise Cancelling Earbuds.

These Supersmall Earbuds are offering the best stereo experience with Wireless Bluetooth technology connection. These ultra-small earbuds are an ideal solution to use with your iPhone, and you can enjoy music, listening to podcasts, and making calls (Buy from Amazon). If you want an AirPod headphone from Apple, that works with Samsung or other Android devices, you can get Apple AirPods Wireless Bluetooth Headset. (Buy from Amazon).

If you are attracted to the Apple earbud design, but still looking for a wired headphone compatible with Android, there are a few of these type headphone is selling by third-party vendors on Amazon. 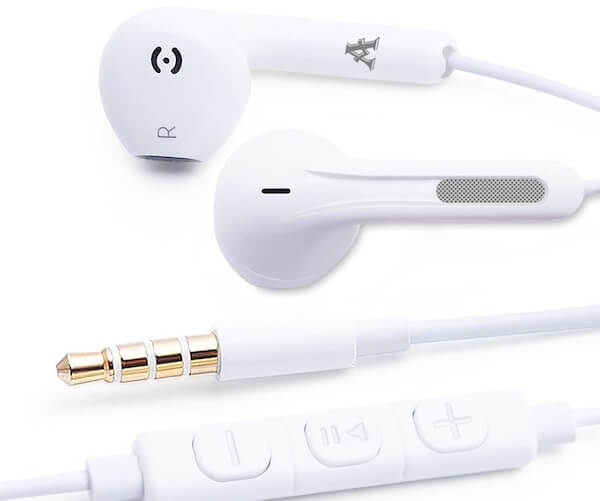 JJCall (2 Pack) 3.5MM iPhone Earphones/Headphones/Earbuds with Stereo Mic&Remote Control for Apple and Android Smartphone Devices are available (from Amazon for $10.99). The control button allows you to Play | Pause | Volume Up / Down | Answer / End Calls | Next Track and also has a built-in microphone and one-button remote for answering calls hands-free.

The Headphone converted below will work in both ways. You can convert an OMTP to CTIA or vise versa with the adapter above. You can get this Alizone 3.5mm 90 Degree Male to Female Audio Adapter from Amazon for $7.99. This can support two-way mutual conversion and automatic switching. The gold plated interface minimize the signal loss and offer maximum quality.

The alternative solution is to try the headphone converters that will work better and you can use iPhone headsets on other smartphones with the help of this Adapter. You can get an adapter from Amazon Cellet Slim 3.5mm Pin to 3.5mm Input Mini-Jack Adapter for iPhone for less than four bucks. The product description stating that “This adapter converts the iPhone special headset tip to universal 3.5mm tip“. Even though this adapter is going to convert the Apple headphone to a universal 3.5mm tip, you may not expect to get the same control functions with this adapter and headphone combination.

4, Use a Bluetooth Wireless Headset.

The technology is advanced and now we have wireless headphones available at a low price. Fortunately, these Bluetooth headphones are offering full compatibility with all smartphones like Android or iPhone. You can refer to this complete list of Best 5 Wireless Bluetooth Long Battery Life Headphones. These headphones are built with inline MIC and dedicated remote control which helps you to enjoy the smartphone handsfree functions. You just want a wireless headphone, then get this Wireless Headphone from Amazon for $20.99. 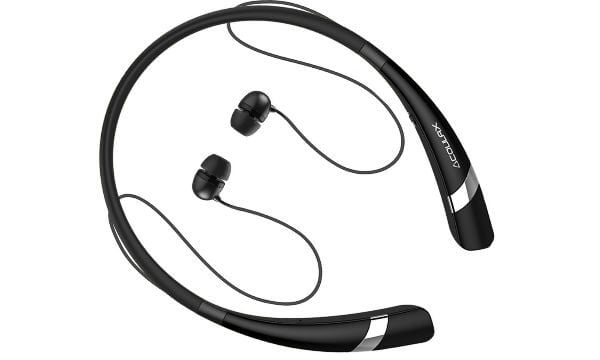 In fact, the main concern while choosing the headset is the battery life, fit type and additional controls that offer by iOS through the headset buttons. The headset controls are offering the handsfree functions to ask Siri, Control Volume, Music Play, Call Answer Reject, etc. For iPhone users, your iPhone headset can do a lot of things that you think and we listed 12 Things You Should Know that Your iPhone Headphone Can Do.

Still no luck with Android headsets! You can try this app available from Google Play Store called Headset Button Controller. According to Google Play Store, “Headset Button Controller is very configurable, allowing you to play music, change tracks, adjust volume, answer phone calls, start Voice Command and many other things, just by clicking the button on your headset.”

Hope this will resolve Apple headset compatibility issue with Android and Windows phone.  Please let us know if there has an alternate workaround to resolve this problem.

Black Friday Deals for JBL: Up to $150 Off for JBL Headphones on Holiday Deals

What is Live Text on iPhone, Get the Best out of It

How to Use TRAI DND on iPhone to Block Spam Calls/SMS?

How to Use Magnifier on iPhone: Use Your iPhone as a Magnifying Glass