Let us see the best call recorder app for Android to record phone calls for both incoming and outgoing.

Editor’s Note: Please check your state or local laws for using call recorder apps and recording calls on your phone. The law may vary depends on your state and country. There are dedicated headphones to record calls without any apps.

Automatic Call Recorder is one of the best call recorders for Android, that let you record phone calls on your choice. With Automatic Call recorder app, you have to option to decide the calls to record or ignore. One of the main features of this call recorder is the integration with the cloud. You can record the phone calls, and sync and save to DropBox or Google Drive. These call records are searchable by contact, phone number or associated note. 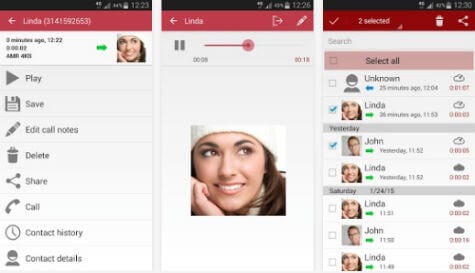 Since these apps are recording calls into your Android inbox, you can limit the size of inbox memory allocated to avoid any Android memory issue. There is an additional feature, which saves important call records into Saved Call Folder to listed later. The inbox recorded calls will be automatically overwritten on new calls to save memory on an Android device. There is three call recording option on this Android app, to Record Everything, Ignore Everything and Ignore Contacts. The premium version support to set auto record calls for selected contacts.

This is one of the free call recorder apps for Android built with excellent features. This Android app lets you organize and group together your recorded calls by date to search and find easily. The Pro version of the app offers the integration with cloud drives like Dropbox and Google Drive to sync your records. 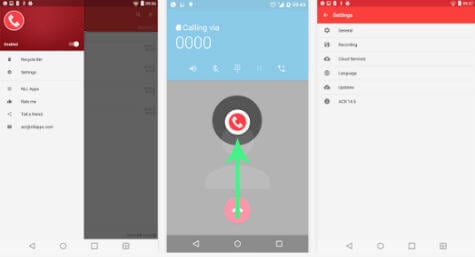 Since the Android call recorder is saving the voice data on your phone, this app automatically deletes old records to save memory on an Android phone. The recorded voice can display with contact names and photo to recognize them quickly. This call recorder Android featured with Auto or Manual Call recording option, delayed recording, password protection to records and also support call recording in multiple formats. 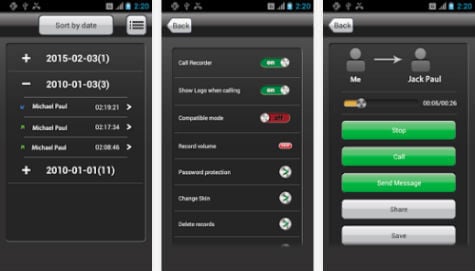 Call Recorder is a free Android app to record phone calls. This app is an auto call recorder, which records incoming and outgoing calls for free without any additional user interaction for recording. You can organize these calls to search and find later, and group them by time, name or date. This app lets you save the calls in mp3 format and record it into an SD card to free up Android memory.

RMC – Record My Call is to build for recording incoming and outgoing calls. However, the app works well for recording the microphone voice, and you have to turn on the speakerphone to record the other side caller voice. The voice files will automatically move to RecordMyCall folder on Android, and you can playback later.  This app is a hidden call recorder, and you can turn the notifications into Hide Mode and set a passcode on the dialer of the app.

The app support manual and auto mode to record all calls, and you can have a dedicated folder to keep important call records in Android phone memory. You can use the automatic filter function to narrow down the calls based on a known and unknown number, and the advanced search for finding the records easily. The mono/stereo option, sample rate, and bitrate adjust options allow to reduce the file size of voice records. The additional feature includes a trash folder to avoid accidental permanent deletion of the voice records, and passcode to protect the recorded files. RMC Android app also provided synchronization with cloud and supports DropBox and Google Drive to sync your records.

Call Recorder supports different recording formats such as MP3, AMR, MP4, 3GP and WAV to save calls and allow to move records to SD card.

That who wants a good quality of call recording, you can try this Auto Call Recorder 2017. This app built to record in crystal clear voice for all incoming and outgoing calls. The calls are recording in HD quality (according to the developer), and work without the net connection to record calls.

The Auto call recorder app provides all features for free, including password protection for recorded calls and overwriting on old records. This Android app can tell you the caller details when you receive the calls in the beginning.  The simple interface also incorporates the incoming or outgoing call duration while recording the calls. The unique feature of this app is the backup and restore features of all Android contact list in one touch.

Call Recorder supports different recording formats such as 3GP and MPEG4 to save calls.

One of the free App to record phone calls from PlayStore that records incoming and outgoing calls automatically without pressing any additional button. This phone recorder is completely free and works with Android phones version 2.1 and above. Super call recorder app supports to playback the recorded voice right from the app instead of depending on any media play to listed the recorded voice call later. The Super Call Recorder can send the recorded voice through WhatsApp or any other chat apps. You can export the recorded calls to the SD card if you want to save memory or transport the call records to PC.

Call Recorder supports different recording formats such as MP3 to save calls and allow to move records to SD card.

Automatic Call Recorder for Me

This Call Recorder Android app is recording calls locally on your phone memory. This smart call recorder app is coming with a nice and simple interface. The user has manual and auto-recording options to control recording. By default with auto call recording, this app will record incoming and outgoing calls with unknown numbers and also the numbers, not in your contact list.

However, you can select manually to record incoming or outgoing calls for the numbers that already saved in your contact list. This app makes your life easy by organizing these phone recordings by date or contact. This app lets you bookmark in between a call recording and add notes over there to refer later.

When you want to record all incoming and outgoing calls on your Android phone, this Android app can serve you better. This Automatic Call Recorder app can automatically record calls on your phone to listen to them later. When you use this phone recording apps, you don’t need to push a single button to record calls, and everything will work in the background.

You can sync these recorded phone calls with cloud apps, share them with email or MMS to your friends. This best call recorder app Android lets you move the call files to the SD card to save memory. In addition to this, the recorder app support to sync with Dropbox, Google Drive, SkyDrive on-demand and organize the recorded calls to search easily.

Automatic Call Recorder supports different recording formats such as MP3, 3GP, MP4, etc. to save calls and allow them to move records to SD cards.

Related: How to Call US Land Phone & Mobile for Free While you Abroad

You can install one of these call recorder apps that can automatically record incoming and outgoing calls on your Android memory or SD card. You may have to turn on speakerphone to record the caller voice in good quality. The best call recorder for Android may support cloud drive sync, multiple format voice recording, and advanced search features. Before you buy the premium version of these automatic call recorder apps, check with the trial version to make sure this phone recording app works with your phone model.

How to make file/folder name disappear when viewing the thumbnail view?

How to turn on private browsing in Mozilla Firefox?

How to Easily Add Custom Subtitles on Netflix